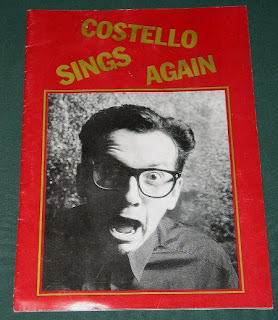 For 5 nights in October of 1986, Elvis Costello performed at the Broadway Theatre in New York City, providing what was for me, 5 of the most memorable concerts I have ever seen in my life. There were two nights with The Attractions, two with The Confederates, a band that consisted of such luminaries as James Burton, Jerry Scheff and Jim Keltner, and a night that was dubbed "The Spectacular Spinning Songbook," where the stage was set up like a game show, and contestants from the audience would have the opportunity to spin a big wheel of chance, hoping to hear El and the boys, play the song that was spun.

It was a spectacle alright, and as much fun as it was to hear Costello sing such oddities from the wheel such as Prince's "Pop Life" and the Psychedelic Furs' "Pretty In Pink," it was my least favorite night of the 5. My thoughts then, were the same now, as I try to begin a review of last night's concert at the Beacon Theatre. As the minutes ticked away, while the contestants were brought to the stage, briefly interviewed before giving the wheel a spin, and then escorted off, I could have been listening to Elvis and the band playing 2-3 more songs instead. 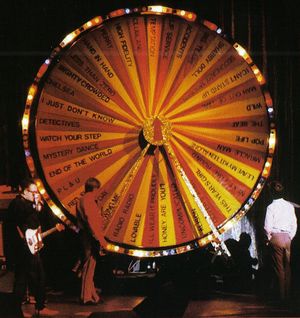 That said, last night's performance, the second of a three night stand, was still one of the most exciting shows I've seen in a long time, mostly because The Imposters are simply one of the best rock and roll bands out there, anchored by original Atttraction drummer Pete Thomas, whose gray hair is the only thing different about the man I first saw tear it up behind the kit in 1978.  35 years later, and Thomas is still a monster behind that kit, driving such classics as "Radio Radio," "Lipstick Vogue" and "Watching The Detectives" into the hemisphere.

(Here, by applause, was a vote for one or the other. As good as "Detectives" was, I was hoping to hear the rarely played "Hoover Factory." But I guess I couldn't expect that kind of reaction from an audience who was shouting out "Alison" requests from the second song in.)


(There is also a "Girl" jackpot on the wheel where we could have heard "Girl" by The Beatles, "Party Girl," "Sulky Girl" and "This Year's Girl," or the "I Can Sing A Rainbow" jackpot that consists of "Red Shoes," Green Shirt," "Blue Chair" and "Purple Rain." Pretty cool, I think.)

(Did you know Elvis had a brother? I didn't. He looks about 10 years younger, but there is a resemblence both in looks and sound, and this little set with The Biblecode Sundays was one of the highlights.)
So Like Candy/Don’t Let Me Be Misunderstood
All Grown Up
Turpentine
Uncomplicated

Lipstick Vogue – duet with Alex Turner of The Arctic Monkeys
Waiting For The End Of The World
Chelsea
I Want You
Alison
Red Shoes
Purple Rain
Pump It Up
Peace, Love And Understanding

Costello's voice was strong, and on songs like the "So Like Candy/Don't Let Me Be Misunderstood" couplet and the king of all bad break-up songs "I Want You," he sounded as he did 25 years ago, truly excited about delivering the goods.

At one point, Tennessee Thomas, the daughter of drummer Pete Thomas, came out and sat behind her dad on a second kit. For four songs, "Turpentine," "Uncomplicated" and then later, "Pump It Up" and "Peace, Love & Understanding," she shadowed her father, for what was one of the most exhilarating performances of the night.

I've been collecting the stray tracks and one-off covers since the "Revolver" tour began  earlier this month, hoping to bring you a nice compilation of the tour. It should be noted that last night's performance of "Pump It Up" was your standard, concert-ending reading. But, EC and the Imposters have been doing a very hip version in 6/8, which you can check out below.


Back in '86, tickets were $25, and I made sure I was there every night. I barely made it to last night's show, though $100, is still a bargain compared to Steely Fucking Dan charging $250 to hear "Two Against Nature" and "Everything Must Go" in their entirety. And now that I've witnessed the 2011 version of the "Spinning Songbook," I wish I had the dough to have gone all three nights.
Posted by Sal Nunziato at 6:31 AM

Not to change the topic, but I just got my copy of the Hollies set last night. Havent' got to the Butterfly cuts or the live set, but already worth my 20 bucks. Their cover of "I Am a Rock," which I had never heard, hit my mid-60s sweet spot in a big way.

Thanks for the rec. Curious what others who ordered the set think.

Another vote here for Hoover Factory. In fact, I'd vote for the whole "Taking Liberties" album, scattershot as it is, I love it as much as anything he's ever done.

I also like "Everything Must Go" but will agree that $250 is fucked up. But then, that's about what it costs to take a family of four to a ballgame (decent seats and grub). Everyone Must Gouge.

Enjoyed the review. I too saw my first Elvis show in '78 (Forum, Harrisburg PA).

A good show. "Out of Time" has always been a Stones favorite of mine, and the Imposters rocked it out. "All Grown Up" hit a little close to home for this 50 something, however.

Great review, but of course I think we both feel the same about the man and the band. I was at those ‘86 shows also, and what I remember was being totally enthralled by it all….the wheel, the Confederates were incredible and the Attractions never cease to amaze. I agree pretty much word for word with your assessment of last night’s show, and even my wife Gisi was like….enough of the wheel and banter, gimmee more songs! Elvis was in fine voice and guitar for sure, but I could not take my eyes off the killer Pete Thomas, and when Tenneessee played along with him….wow…well I got goose bumps now thinkin about it. They were so lockstep in sync. What a lucky kid, to have one of the best drummers in the world showing you how it’s done. Pete is concise, precise, and tasteful and in the pocket always….I never tire of seeing or listening to him. And Steve just gets more creative with the songs as time goes by…he was all over the place on those keys. Loved “All Grown Up”. Great mix of songs….and I agree, would have loved to hear Hoover Factory, but they were all fine choices to my ears..how could you miss with a catalog like his? Sometimes a little rushed, but I’m being picky..I’ve seen good Elvis shows and great Elvis shows, but never a bad one. This was very special. The sound where we were (left on the wall, edge of balc) was a bit muddy, guitar didn’t really cut through, but it got better as the show progressed. This was a real treat for many reasons….last tour I saw was 2007, and hope he’s back soon. A splendid time was had by all.

Allen -- read my blog post about the Thomases. Sal -- I found this clip that merges Elvis AND Steely Dan AND the Thomases!

I decided to pass on EC this time around due to budgetary constraints. I WAS feeling like a very responsible person until I read this post. Thanks a lot Sal!

Hey Bruce, The results are coming in, but I think you should re-post this on the Hollies post.

I must note that the applause was very close for the Detectives/Hoover Factoty battle in Boston on Friday Nioght. The solution??? Play both. What a treat!

I'm glad to see somebody else held onto his Costello Sings Again program! I think that cost $10 back then? (And the T-shirt must have been $15 or so.)

I only got to see the final night of the tour in Philadelphia, which was also the last time the Attractions played in America for eight years. It was my first Elvis show, and tough to beat. Especially since I can't afford to see him anymore.

I've seen Costello in great shows (like when he *opened* with "Possession" at a show a few years ago, my favorite song of his) and ho-hum shows, but reading this review makes me wish I could have caught one of these wheel shows. I love that concept!

Man. The one great failure of my music fandom is that I've never seen Elvis Costello live. I've been a huge fan since the early 80s, but the timing was always wrong. Man, oh man.
I'm going to put Blood & Chocolate on right now.

I saw one of the wheel shows in the UK back in 86. I'd bought tickets with my girlfriend and between that and the show we'd split up, in acrimonious circumstances. We had seats at the front of a block and noticed that all the couples who got into the gogo cage were on the receiving end of an innuendo laden grilling from Elvis. We really didn't want to go through that but as we were the only people NOT trying to catch the attention of the guy selecting people that meant what we were the ones who caught his eye. We squirmed as he headed for us - but fortunately a friend with his leapt in front and got himself taken up. Phew.

I Want You was fun that night to!

I'd have gone for Hoover Factory. I don't really need to hear Detectives again and I used to commute past the Hoover Factory in my younger days, before it was turned into a supermarket.

Still talk to that girlfriend sometimes.

Durn - not commin near Atlanta or Nashville

My third concert after moving to New York from Pittsburgh was the Attractions show from this 5-night stand. (The first two were John Cale and Chris Spedding at the Lone Star Road House and Neil Young and Crazy Horse at the Garden.) I gave 50 bucks to a scalper for seats way up in the balcony. I enjoyed the show quite a bit, but in retrospect I wish I had sprung for one of the nights with the Confederates. Despite Blood and Chocolate being one of my favorite Costello albums, I think you could tell they were ready for a break at that point.

I'm sorry I missed the recent run at the Beacon, but I caught the April Fools show, which sent me home in a happy sweat.