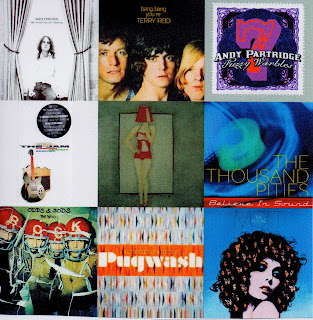 As per me, I've latched on to a handful of songs this past week. And while 5 hours of Dylan covers owned my ears for the last 3 days, I did manage to spin the following 4 songs an obsessive number of times in between "Hattie Carrols."

•Last Glittering Thrill by The Thousand Pities, a band from Montclair, New Jersey whose CD was released back in March but only just found its way to my CD player, is doing all the right things by me.  I'm loving the record, "Believe In Sound," but I'm REALLY loving this tune. (And that chorus!)

•I Don't Like It But I've Got To Do It by Pugwash is yet another in what seems like an endless supply of infectious tunes by this pop genius, aka Thomas Walsh from Dublin, who should be as famous as Paul McCartney, or at the very least, Mike McGear.

•Your Closest Friends by John Dunbar hit home like a wrecking ball. It's lyrically clever, and twisted in the very best way. Musically, it's perfect pop candy, like the rest of "Comeuppance, See Me Sometime," the album in which it appears.

•Summer '68 from Pink Floyd's "Atom Heart Mother," has worked its way into my Top 500. (That's not as many as it sounds when we're talking all time.)  It's a little masterpiece from Richard Wright and I'm always surprised it's Pink Floyd when I hear it.

It is this quartet of songs that has been in heavy rotation this week, so naturally,  I wanted to build a mix around them...and this is what I've got.

Haven't heard the Eric Matthews cut in ages, and I was reminded of it thanks to the new release (18 years after their debut) from Cardinal, Eric's project with Richard Davies.

I first heard the XTC track on a bootleg of demos, then found out it appeared in finished form on a benefit CD whose name escapes me, then it turned up in a third incarnation on Andy's "Fuzzy Warbles" series. I still like the first version I heard, so that's here.

I can never say enough about Jason Falkner. Here's another guy who deserves to be in the Pop Genius Hall Of Fame, if only for covering Be Bop Deluxe, which is what's here.

Once you unzip and load, you'll notice I gave the mix the title "Pop/Psych/Hooks/Songs," which is a little bit clumsy and a little bit horrible. Maybe you can come up with something better.

As I am wont to say, it sounds good altogether.

Fanfare- Eric Matthews
Forget All About It- Nazz
The EMI Song (Smile For Me)- Alex Chilton
I Don't Like It But I've Got To Do It- Pugwash
Last Glittering Thrill- The Thousand Pities
I Don't Wanna Be Here- XTC
All Around The World- The Jam
Little Billy- The Who
She Sent Me Away- David Werner
I See The Rain- Marmalade
Summer '68- Pink Floyd
Jet Silver & The Dolls Of Venus- Jason Falkner
Without Expression- Terry Reid
Your Closest Friends- John Dunbar
Foxy, Foxy- Mott The Hoople
It's All Over Now, Baby Blue- Bad Religion

"Pure Pop For Then People"

I'm going to listen to it right now.
"Summer '68" and "Fat Old Sun" are amongst my favorite Pink Floyd songs.
Even though I've had "Atom Heart Mother" for decades, I've never played side 1 a second time. And the only thing I like about "Alan's Psychedelic Breakfast" is that they spelled Alan right.

Why was "I See The Rain" not a mega-smash international hit?

I first heard it on the Nuggets II box set and was slack-jawed by that song and amazed I had never heard it until then.

To add to Albert's comment, anything with Pugwash must be paid attention to as well. I haven't been so enamoured of a band in a long liong time. As you said, Thomas Walsh is responsible for one pop gem after another.
Also glad to see Foxy Foxy, which I listen to alot, XTC and David Werner. Can't wait to di into the rest.

wow! Thousand Pities is my buddy Matt Davis, not only an incredibly talented musician but a truly wonderful fellow as well.

There are more Marmalade gems to be had, great Mix Sal, love David's opener, made me Laugh Out Loud or LOL showing how down with da kidz I am.

BTW, cbox seems far less entertaining since you returned as yourself Sal.

On a WE Mix that just might be your best to date, my personal highlights are Bad Religion(holy smokes),Jason Falkner(great, and the good sense to not even try to replicate a Bill Nelson guitar solo),Eric Matthews(double holy smokes)...a few more but let me listen again...and the stuff I know, nice to have on one neat playlist...grazie mille...

The last couple of weeks have been really hectic and busy. Not in a bad way, but grinding. Last week's mix was just what I needed, some good soul (plus Steve's Terry Reid version of "Waterloo Sunset"). This week, you delivered again. Washed down with a few beers, I feel human again.
Many thanks.

I am extremely disappointed, but not surprised the " author " would participate in giving " amnesty international " this kind of attention, no matter who the " artist " is.

This is an evil, radical left wing anti - American organization which has participated in defending some of this countries' worst enemies...

What do you find funny about this organization coming to the defense of " mumia abu-jamal " & his execution of Police Officer " Daniel Faulkner " ?
( 1981, Philidelphia )

From the album "LET'S GO GET BLUNSTONED"

Seriously, I'd forgotten how great that one is, and thanks.
:-)

David Werner! That's a great song. The album came out when I was in high school in Pittsburgh, and he was a local hero of sorts--lots of airplay on the album rock stations. There are actually a bunch of great songs on that album, including What's Right, Can't Imagine, and Melanie Cries.

Thanks for rekindling some memories.

Meanstreets,
Faulkner shot Abu Jamal. If he'd died instead, Faulkner probably would have got off, as is usually the case. Anyway your argument is consistent with the utter cluelessness you expressed originally, which I attempted to defuse by suggesting you must be joking.
Can we get back to the music now?

I have suceeded Buzz...

You have been " outed " as a guilty, self hating, white liberal, who hates police officers & all that is good & just....

I pity you for defending Mumia Abu -Jamal & his " African War Ministry "...what a miserable life you must lead....

Meanstreets, we go back, but I have asked a number of times to keep politics off this forum. Yes, occasionally I let one slip, but if you can't see how this is about the music, then we have a problem, especially with the name calling.

@Buzz, I noticed how you tried diffuse the situation. Thanks for trying.

You boys want to continue, let me know, and I'll give you each other's e-mail addresses.

Understood Sal, but you posted this organization's release, not I....it is political...

I'm going outside for a swim...

I posted the release to talk about the 5 hours of Dylan covers, which is what I did, over two days. My one "political comment," which was directed at FD13NYC, was simply in response to his "atrocious, overblown trash" comment, which was also about the music.

Sorry, that last comment should have been directed @Meanstreets.

I knew I was stepping in it, and I'm sorry, Sal, but I couldn't let it pass, I had to make a stand for "all that is good and just", the very things I've been accused of hating. I carefully didn't defend Mumia or his affiliation.
If I had a bumper sticker on my car, it would say, "Question Authority", which I learned from Bob, whose music is the subject in question.
No, I have been "outed" as the son of a right wing nutjob. The experience taught me to recognize that philosophy for what it is.
And No, I don't need Meanstreets email. I can always call my Dad.
Now can we get back to the music?
Pugwash has a new fan.

I have no idea about the Faulkner Business and what it entailed.

I am also apolitical.

Amnesty International rally against the injustices and lack of freedom in the world.

They support neither left or right, just Human Rights.

Your gung ho comment underlines why America can get stick, it is ill informed and a pile of shite.

I too thought you were joking, because anyone in charge of their full mental faculties would think the same.

This place is about music and so it should be.

You also strike me as someone who has to have the last word.

Well if Sal publishes this, I won't be replying. I've said all I need too.

To " Anything Should Happen ".... outside of you not being able to write coherently....

I tried to bring this to a conclusion Sal, but not with me being attack by some " simpleton " who believes this organization is unbiased....

Sal, I like Pugwash.
I'm gonna keep it on my HDD.

BTW, I totally agree on including EMI Song and Summer '68.

Can't wait for the next week.

and what the hell is halignic for today's word verification, some kind of LSD inspired psychedelic breath mint.....people people oooo's fightin and whatever...

The mix flows beautifully.
Thanks again.

one of your best weekend mixes, Thank you