Costello & The Roots: What's So Funny? 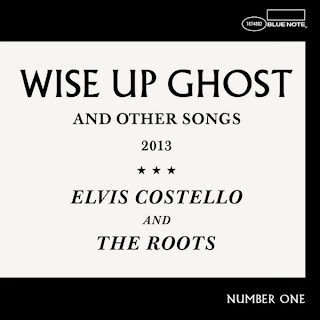 Elvis Costello is a frequent subject on these pages. Quite often, the sentiment is the same. "He stopped making good records after Bruce Thomas left." I am not of that mind. If I had my druthers, Costello and the Attractions would still be making records, sure. But the genre-hopping albums old El has been making have kept me on my toes, and some of them are better than a few of those Attractions records.

He's at it again, this time with The Roots from Philadelphia.

Reading about "Wise Up Ghost" these last few weeks had made me less interested than I was upon first hearing about this collaboration. All this talk about revisiting older Costello tunes and sampling tracks from records I wasn't that fond of to begin with took the wind out of my sails. But then, what was I really expecting from this marriage? Elvis rapping? I knew The Roots could play rock and roll, but what would be the point?

The first single, "Walk Us Uptown," was released a few weeks ago, and as some predicted on these pages, it is not the best representation of what has come. Costello's voice on that first single sounds older and angrier, and with not much of a melody to work with, the hip-hop beats and textures wear thin. But elsewhere on this thrilling new record, Elvis & the band, anchored by one of the best drummers in the game, Ahmir ?uestlove Thompson, have created mini-masterworks.

Songs like "Sugar Won't Work," with its classic Costello melody, greasey groove and Philly strings circa 1972, as well as the epic title track, are powerhouses of sound. "Tripwire," sampling Costello's "Satellite" from "Spike" is sweet and understated, feeling like something Marvin Gaye might have recorded in between "In Our Lifetime" and "Midnight Love." "Stick Out Your Tongue" is the "Pills & Soap" rewrite, and again, it's fresh and exciting. This is not a throwaway, or some vanity project.

I've made four complete passes through "Wise Up Ghost," each time better than the last. Fair warning though, if you've already lost your taste for Costello, reentry may prove difficult. But trust me, there's a lot of music here and it's very strong. Wipe the slate if it helps. Just don't ignore "Wise Up Ghost."

as an unapologetic Costello fan, I was excited to hear it. It`s actually better than I expected and follows his credo of being a "working musician". He`s just using a different set of paints this time. I prefer him w/the Imposters/Attractions, but I`m not disappointed with it, either.

I'll give this a whirl later but, in my listening world (limited as it may be), Costello falls into the category of "artists I know I should like, but it just doesn't click for me".

It's the voice. I know he's great (and to be honest I loved Armed Forces back in the day). And enough people whose opinion I respect love him. But for some reason, my antenna just doesn't pick up his signal.

I'm sure Declan's crests are fallen knowing that I feel this way. Cheer up, Elvis...maybe Diana will wear that cool lingerie thingy...OK...inappropriate.

A longtime Elvis fan, I was lucky enough to be living in the North West of England at the time and caught his first televised performances on Granada TV, I was intrigued by this album and now, like Sal, after several listens I am thinking it's pretty darned good, in fact it may be his best work since Brutal Youth in my opinion. Sure there have been great songs on albums since Brutal Youth, but nothing as cohesive as this sounds.

"Bruce Thomas..." That's my quote, I'm sure. I know I've used it often and I don't think I've changed my opinion (Painted From Memory being the exception...)

I know *eventually* I'll give this a spin (because I feel like I *have to*), but it'll be awfully hard to wipe the slate before listening to it based on it's description (and the posting of the lead off track did nothing to change my preconception of it.)

I feel like an old fogey saying this, too...

Okay. I listened several times, and took notes. (Coming soon to an Everybody's Dummy blog near you!) That said...

I can't see giving this anything higher than three stars out of five. Why? Because too many of the grooves sound the same.

The Roots are a great live band; anyone who's watched any two minutes of the Fallon show knows this. So why does the entire album sound like a sample? Even the things that I don't recognize I assume are loops I haven't placed. Methinks it should have stayed an EP, as the full-length I heard today begs for editing.

Oh, don't worry. I'll buy it. Just as I've bought every release street date since 1989 (because Blood & Chocolate came out the week I went to college, and I was busy). But I don't think I'll love it.

At least not like I did North. But that's another argument for a different thread.

I wasn't a fan of "North." Not because I'm against what EC was trying to do, but because it felt forced, which is exactly why I love this new record. On paper, it looks unlikely and "forced," and to my ears it sounds incredibly natural.

Bruce Thomas was undeniably a great bass player, and I was a bit wary of accepting Davey Farragher as a new permanent band member, but watch any recent live footage of the band and you see just how good he ism, and how well he gels with Steve & Pete.

I have nothing personally against Davey Farragher. Live, the band does a great job on the classics.

However, I've not heard anything post-Bruce Thomas on an EC album that made me stop and think "shit, listen to that killer bass line".

Maybe that's by design by EC, I dunno.

If I'm missing an obvious song, please point it out!

It's a reminder that new music can be exciting and fresh.

"Sugar Won't Work" is pure magic. As good as it gets.

Shriner, unless you're a bass player and you're focusing on just the bass...which is not a wise crack, as I jump ship the minute I don't like a drummer...I never found any one song from any Attractions album to have been so much better because of Bruce, no matter how great he is.

Ever hear "The Attractions-Mad About The Wrong Boy?" It's pretty average and no bass line is going to save that album.

Listen to "Momofuku." This is a criminally ignored record with some fantastic music on it.

"However, I've not heard anything post-Bruce Thomas on an EC album that made me stop and think "shit, listen to that killer bass line"

It's from "Delivery Man"


*In this case a term of endearment.

"This Year's Girl" is my go-to-Bruce-Thomas-is-great song. It's a good song made so much better by the bass playing.

In fact *all* the bass playing on This Year's Model -- is stunning. "Lipstick Vogue"? Another awesome track. I'm not shading on the contributions of Nieve and Pete Thomas, but TYM is *so much better* than My Aim Is True because of the bass playing...


And I'm not a bass player (though I have played stunt bass in a band briefly), as I'm strictly rhythm...


But Thomas is up there with Entwhistle, McCartney and Moulding for me in terms of indelible *rock* (or pop-rock) bassists.

But I digress (which I've been doing too much of on the past few threads -- sorry!)...


Anyway, I will listen to the new EC album when my library gets a copy, I'm sure...

Can't add much Sal, agree 100% with all you say and it did take a few listens.

The one thing I don't subscribe to is that it all ended after Bruce Thomas left.

To say that Costello hasn't made a decent album since, to these ears, is just wrong.

Plus Thomas may be a fine bass player, but I hear nothing to prove this on any Attractions album, which are Costello and Nieve led albums.

If the casual listener did pick out an instrument on an Attractions record, it would be played by Steve Nieve.

That's not to decry Thomas, but it certainly overstates his part in The Attractions.

I've played this album once, all the way through. I found it very hard to get through. Nothing much of a catchy song here, it's like he's forgotten how to write a hook. I'm going to erase it from my 4TB hard drive cause I can't ever think of when I'd ever want to hear it again.

(I was a huge fan of his from the beginning, but I've been giving up on him for many years)

Yeah, really! Thanks for the NPR link. I will try and listen today. If you have had an unfortunate live experience with an artist it can be hard to make room for him in your playlist of life. Happened with EC, many years ago. Garden State Arts Center, the old one. The Pogues opened. Now I like keening as much as the next guy and I like rain. We got both. Could not wait for the Pogues set to end. The Elvis show was dispirited and way too long, at least that is my recollection. Three encores (at least) apropos of nothing in terms of audience response, demand. Since? I always enjoyed Spike, the Ship of Fools cover and, of course, River in Reverse. We shall see . . .

So, I made it half-way through the stream. I would never listen to this again. Like Gyro said -- there were no hooks and life is too short to relisten to music I don't like right off the bat to try to "get it".

did everyone notice the tip-o-the-hat in cover design to the old beat Pocket Poet covers??
eg:
http://www.litkicks.com/Images/kaddish.jpg

It's usually my job to bitch about an established artist's recent work, so I'm surprised at how much resistance this is getting. How can anyone listen to "Sugar Won't Work", and claim there are no hooks?
The chorus sure sounds like one to me.