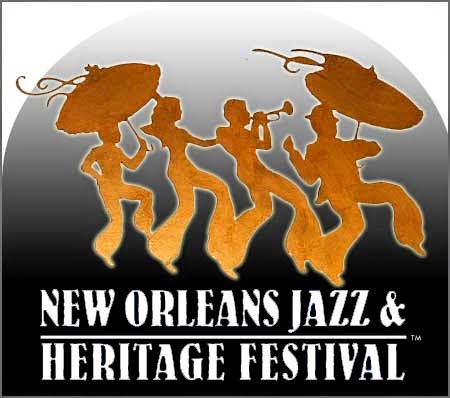 Week One of the New Orleans Jazz & Heritage Festival has come to a close and while I was unable to attend this year, my heart and soul was with all those fortunate sons of bitches who got to experience the sun, fun, food, drink, smell and sounds of what still remains, even through the many changes (not all pleasant) it has taken the last few years, the greatest music festival on the planet.

Every year at this time, new records drop from some of New Orleans' finest musicians, to capitalize on sales from the festival. I want to tell you why you should track two of these records down immediately and play them often. The main reason? Both of these records sound exactly the way I wanted them to sound after experiencing so much of this music live. This is not an easy feat. 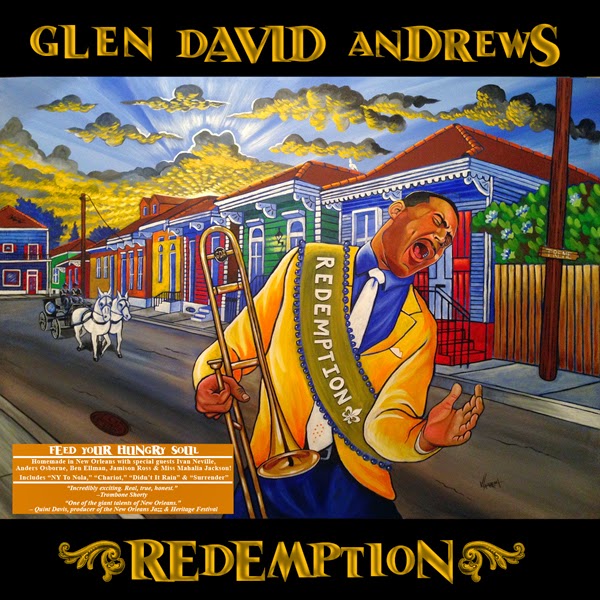 Too often, musicians from the Crescent City try to translate the electricity of their live performances to record and too often it fails. What might have been a once in a lifetime moment for those experiencing the music up close becomes a recording that kowtows to the fan and the final product is nothing more than the usual drums and horns with saints marching and lots of references to gumbo and Bourbon Street. Producer Leo Sacks knows this all too well and that is why "Redemption," the new release from Treme's own Glen David Andrews, works as well as it does. It's not a souvenir of your trip to New Orleans. It's a damn fine record.

Glen David Andrews has had a tough time and as he says, "Redemption is about my journey back from the living dead." With help from members of Galactic and Ivan Neville and even Mahalia Jackson, GDA confesses his sins, gets his life back and demands that you listen.

"Redemption" explodes right out of the box with "NY To NOLA," a fiery, funky blues that sets the stage with Andrews' growling his life's options, good and bad, and building to a relentless rock and roll finale. If you're not hooked from the get-go, check your pulse.

For the next 40 minutes, GDA offers up some sweet soul music on "Chariot" and "Movin' Up," a bit of hard funk with special guest Anders Osborne on "Lower Power," and a duet with Mahalia Jackson on the standard "Didn't It Rain" that could have been a gimmicky epic fail, but again, producer Leo Sacks made sure that didn't happen.

The record closes with a cover of Curtis Mayfield's "Something To Believe In" that is an all too fitting coda for Andrews. He has come a long way and this is his time. "Redemption" is one of those records that fans of New Orleans music want to come along more often than they do. It captures the spirit and the talent of the city and never disrespects the listener by getting lazy. 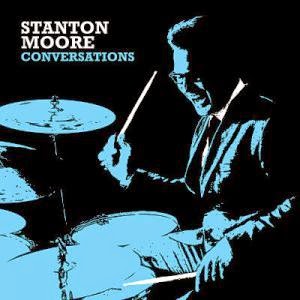 On more than one occasion while in New Orleans, I mentioned to Stanton Moore, David Torkanowsky and James Singleton, together and separately, that they were my three favorite musicians in that city and that they need to make music together. I'm quite sure I had nothing at all to do with the creation of the Stanton Moore Trio, but here they are nonetheless and I couldn't be happier.

I wrote about "Conversations" back in December when the campaign to fund the record had just begun. Now, the recording has hit and it is already a contender for a fave of the year.

These three musicians are the cream of the New Orleans crop, each with his own unique approach to his instrument. David Torkanowsky can attack his piano with a Jimi Hendrix ferocity and then moments later, offer a touch evoking the sounds of great names like James Booker and Thelonious Monk. James Singleton can singlehandedly make more music with his bass than most quintets. Now, with Stanton Moore leading the band, a drummer I've featured time and again on these pages thanks to his ability to repeatedly boggle my mind on the kit, this trio creates one of the most musical jazz recordings I've heard in ages.

Again, the spirit of New Orleans music takes center stage, with songs composed by NOLA legend James Black, as well as a few originals by the band members themselves. "Conversations" should not scare away anyone who is not a regular listener of jazz. This is a record for everyone. "In The Keyhole" swings. "Carnival" will lift your spirits and dare you to dance." "Waltz For All Souls" will break your heart. All of it will make you play your favorite air instrument.

I have to point out that the playing on this record is off the charts, while never feeling unnecessary. The trio does show off a bit, but again I stress, it's so musical, it never feels like an in-joke. I saw this trio live last year and at the end of the performance I thought, this set should be the record. Well, "Conversations' has exceeded my expectations.

Good stuff for a Monday! I was at the Fairgrounds on Friday – saw a bunch of local music: Real Untouchable Brass Band, Irvin Mayfield, a few minutes of Shamar Allen – who impressed the heck out of me on my first visit but has gone in a more populist direction (what if I just don’t want to scream?), Roger Lewis’ Baritone Bliss, even opting for Aurora Nealand and the Royal Roses over Carlos Santana. I am no Jazz Fest veteran but it seems to me you can make it what you want, no one is forcing you to see Arcade Fire or Eric Clapton. Do what you wanna! Although I did purposely avoid the hordes of Phish followers on Saturday . . .
Saw Glen David Andrews at the Little Gem Saloon. Great set at a great new venue. Better than average food, historic location, accommodating staff and owner – the whole package. He tailored his set for the white touristy crowd (an orthodontist convention was in town, I kid you not, almost as oppressive as the Phish faithful . . .) Andrews got the whole joint jumping, called up some guests and truly delivered. The CD takes that all one step farther as Sal (and Offbeat and the New York Times [?] have been quick to observe). Hope this cat stays clean and keeps on keeping on.
Last trip in December I caught Stanton Moore’s trio at Snug Harbor. Not sure they can capture that intimate vibe on a disc. All three are also as much fun to watch as to hear. I ordered it from LMF (and some others). Look forward to sitting down with it.
Off the wall plug for a duo called simply The Sirens. Saw them busking in the Quarter and kicking myself for not grabbing the CD (not on LMF site). Two gals, two ukes, incredible harmonies – any kind or respectable production makes this a winner. They did a version of She Loves You that had me smiling the whole morning . . .

Nice writing, Sal. Love the part about "my heart and soul was with all those fortunate sons of bitches..."

I was there last year and am bummin' missing it this year. Stanton Moore is a favorite, and you're right - this record is killer. I hadn't heard a word about it, so thanks for shining a light on it - I'll get that mother.

p.s. still enjoying another record you promoted in this space, The Wood Brothers' "The Muse"... I found it on vinyl and damn, it's fine!

Thanks Dave, but I'm pretty sure it's not the trio but another of his projects called The M&M's.