When Sal announced his decision to quit making Weekend Mixes, the outpouring of disappointment from readers was considerable. I emailed him and offered to share "Loss Leaders", which I had planned to make for some time. Then there was "Big Star Stuff", also ready to go, as was "Truckers, Etc", and "Happy Holidays". 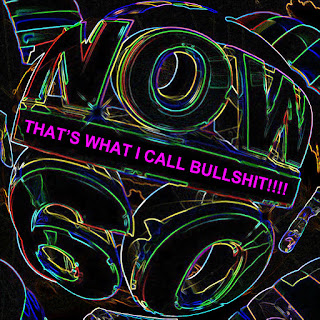 This week's is from a July 2013 post over at my blog, Now That's What I Call Bullshit, where I post a few times per year for no particular reason. It's really hard work, so I know how much effort Sal has put into Burning Wood.
Making a good mix that flows like an album, with songs that wear at about the same rate is really difficult. Usually I have to make several prototypes.

I kind of quit making mixes when my phone became my music player. It's 16 gigs on shuffle. A new mix every day. Still there is something to be said for a well curated set.

I almost put together my favorites of 2015, and I might yet.  I will keep at this as long as I can, or until Sal wants it back.

I have no problem with large leaps between genres, as long the songs work together.
If I was in control of a radio station, let's call it WBBJ(W-Buzz-Baby-Jesus), my playlist would be based on Duke Ellington's concept of "There are two kinds of music. Good music, and the other kind".

The title references a series of Top 40-ish cd's you've probably seen and ignored in Target or Walmart. I've appropriated the art for number 60, which is the number of this "Bullshit" edition.

I like starting them with the "needle drop". This sound inspires delicious nostalgic anticipation. I salivate when I hear it. Apparently the ancient Greeks used a bit of cacophony to start a performance, as it defined the silence immediately after. This particular needle drop is "The Night Tripper" by Dr. John. A record I found on the street in Soho, early '90's. It's a really scatched copy.

1- Needle drop
2- "Campesina" by Spiteri, from 1973. Led by Venezuelan brothers, Charlie and George, Spiteri was released in England as an answer to Santana.
It never charted anywhere, and they didn't make any more albums. And so this one gem makes its mark in history as a collectors' 'must have' and an album that could have been.... but never was. Still, never too late to enjoy it!

3- "What's Right" by David Werner from his eponymous 1979 album. It's brilliant, and actually made the charts. Song writer, recording artist, and record producer, he is also known for his two RCA glam rock releases “Whizz Kid” and “Imagination Quota”. All are worth checking out.

6- "Now" - Dion and The Wanderers. From his late '60's album "Wonder Where I'm Bound", which no one bought, this song is powerfully good. With it's kind of California folk-rock arrangement, it doesn't sound a thing like "Runaround Sue" or any of his other hits. One thing for sure, the man can sing. (1968)

8- "The World Is A Ghetto" - War. I like to include a couple actual hits in the mix. The context elevates the more obscure tunes. That they hold their own is evidence that the biggest reason they didn't chart has more to do with luck than quality. (1973)

9- "Walking The Whippet" - Andy Mackay from his 1974 album, "In Search Of Eddie Riff". With a nod to "Telstar", this instrumental features Phil Manzanera, and is pretty much Roxy Music without a singer.

10- "Jungle Lullabye" - CW Stoneking from his 2008 album "Jungle Blues". This Australian singer songwriter guitar banjo player manages to evoke 1920's music without sounding like a museum. This song is a favorite around my house. Great arrangement by the Primitive Horn Orchestra.

13- "Stop Me, Citate Me" By The Fraternity Of Man, best known for "Don't Bogart Me" from "Easy Rider" Its original members included three musicians from Lowell George's band The Factory – Richie Hayward later of Little Feat, Warren Klein, and Martin Kibbee. This countrified psychedelic artifact tells a familiar tale with humor without being a novelty. (1968)

14- "Melody" Formed in 1990, Custard is an indie rock band from Brisbane, Australia. Working similar territory as XTC, they wrote short snappy pop songs with elements of rock n roll and the occasional pedal steel. "Melody" will stick in your head.

15- "Make Me Smile (Come Up And See Me)" by Steve Harley & Cockney Rebel from the album "The Best Years of Our Lives". Somehow I missed this when it came out in 1975. Infectious as hell, it reminds me of Eno at his glam-poppy best.

16- "Sad Is The Way That I Feel" Mark Eric (1969). Really obscure slab of Beach Boy homage. On a side note, Eric was also a teen actor, appearing on The Partridge Family, among other TV shows of the 60s.

17- "Shelby GT 356" The Chesterfield Kings. From their foray into surf music "Surfin' Rampage" (1997). This Rochester NY institution has been exploring various forms of garage rock since the 1980's. They get all the details right, down to their outfits.

18- "Muswell Hillbilly" Southern Culture On The Skids take on The Kinks classic. I've been a Kinks fan since "You Really Got Me", and I can be pretty hard to please, but I think they get all the important things right on this. The rest of the album "Countrypolitan Favorites" (2007) is just as good.

20- "Car Song (Non-Album Track)" Fresh Maggots (1971). Impossibly obscure bit of early '70's British folk. This catchy tune is more fun than anything else on the album.

21- "Freddie's Dead" Curtis Mayfield, 1972. Another actual hit. The single was released before the Super Fly album, and in fact before the film itself was in theaters. It peaked at #4 on the U.S. Pop Chart and #2 on the R&B chart.

22- "Played The Game Too Long" The Original Texas Playboys, Under The Direction Of Leon McAuliffe(1979). I found this vinyl rip over at Willard's. 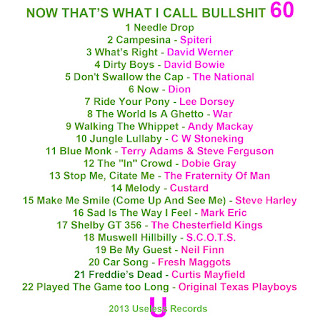 Have a great weekend!

Now That's What I Call Bullshit 60
Posted by buzzbabyjesus at 8:29 PM

Sal raised the bar pretty high and I'll do my best to maintain the quality everyone expects.
Hopefully he'll return soon.

Re: David Werner. I think there's a good mix or two to be made focusing on late 70s/early 80s acts who had a good buzz at the time, usually some critical acclaim, but never quite made it big. Werner. The A's. Angel City (in America at least as I gather they were always huge in Australia). Any number of bands. Even people like Graham Parker and Ian Hunter seemed to have fallen by the wayside with the aging general public (although both are still producing good material). To many of us here, this stuff is second nature, but I can guarantee you, most people our age have forgotten, and most people younger have never heard it.

So far so good BBJ!

Just the right mix of the familiar and the mysterious (to me). Thanks, Buzz.

Hey Buzz - thanks for another enticing mix of things I know and love and things I have not a damn clue about. Very intrigued to hear how it all works together!

When the Sal's away, I'm diggin' WBBJ...Thank you for diggin' deep, mister.

this is great! Thanks for this

Ditto. It may be from two and a half years ago but still new to these tired old ears & well worth a listen at that, especially the War/Andy Mackay segue for some reason. Cheers![Beaten twice by the "I'm not a robot" captcha so 3rd time lucky?]