THE WEEKEND MIX: When All Else Fails...COVERS 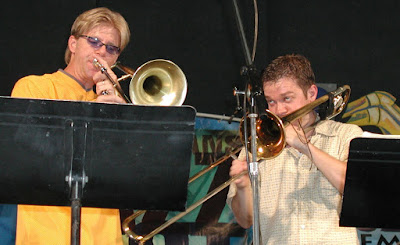 This mix isn't a complete act of desperation to get something up last minute. I had been listening to a few live performances from the New Orleans Jazz Fest, getting nostalgic for those "first times." Like, the first time I saw Allen Toussaint in the flesh. Or, the first time I discovered (through a friend) the great Jon Cleary. And there was that day, the very first time I stepped foot onto the Fairgrounds, not knowing what was ahead of me. Suddenly, I was twenty feet from a whole lotta horns and a great drummer, and was listening to something I recognized but couldn't quite place. And when I did finally realize what song was being played, I fell forever in love with New Orleans. The song was Black Sabbath's "The Wizard" and the band was Bonerama. And that's where it began and where we begin today.

(The pic is Craig Klein and Mark Mullins of Bonerama taken on that very same day in 1999, maybe even during "The Wizard." I do stuff like that.)

I thought I'd continue with more live covers from Jazz Fest, but changed course, when sound quality started to become an issue. So, it's just covers. That's okay. We like covers, right?

Some you may have heard before, probably because I repeat myself occasionally. But go in again. There are some great ones here, including a few faves like Cyril Neville's take on Dylan and Los Lobos getting gritty with Queen. Hell, I like them all.

Original artists in parenthesis after title.

Just what the doctor ordered for a sunny cold day!

Thanks Sal -- have a great weekend.

Hell yeah, we like covers! In just the last day or two I got the chance to hear Lorde cover Bowie, Ben Harper cover George Harrison, and a young woman cover Voodoo Child on a 12-string Korean gayageum...My only request from covers is that they make it new, or at least bring something new to the song. The cover by Matthew Sweet isn't particularly new, but his voice is so damn good that it's a really nice version; I like a lot of the 'Under the Covers' stuff he's done with Susanna Hoffs, particularly their version of Yes's 'Your Move'. Some covers I even prefer to the originals (Vanilla Fudge's 'Keep Me Hangin On'; Joe Cocker's 'The Letter'). Great mix, Sal, thanks!

Sal comes to the rescue. The Weekend Mix Lives!

The outrageous notion that a New Orleans brass band could cover a Sabbath classic like "The Wizard" sucked me in - and I'll grudgingly admit it ain't half bad at that! As I don't know half the artists or even half the original songs being covered (see me after class - Ed) it's an educational & entertaining weekend mix for me. Big thanks for this & may your weekend be as good as you want it to be. Cheers!

Good mix, thanks! I liked the Fest2010 mix too. "Sleeping On The Sidewalk" has inspired me to do a mix of covers Los Lobos have done. I have 22 already, off to a good start.

Nice one. Eclectic to the point of obscurity!... I echo dogbreah in not knowing several of the songs nor the perpetrators - so we are both for detention methinks. Excellent listening.

hope you've discovered Twangorama who inspired their name. They are kind of scattered about now. they too did a residence @ Carrollton Station where they had featured guests, once being with Bonorama. They kind of morphed into New Orlean's Guitar Quartet

Saw Havens do 'Won't Get Fooled Again' at a small local venue. It was truly electric. The tour was to support Nobody Left to Crown. I got to speak to him after the show (he wanted to have his picture taken with me & AMB) about collecting comics - of all things. Bonerama has some huge covers. Ditto Tin Men (Immigrant Song makes me smile ear-to-ear). Can't go wrong with a well-curated cover mix.