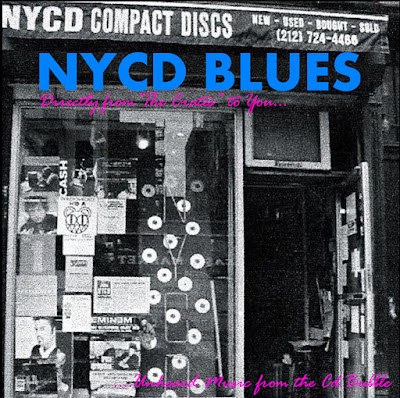 All these cd's came from "The Crates". $2 each or 10 for $15. I always found 10 I was willing to take a chance on.
I've bought lots of records I expected to like, but didn't. I preferred the odds of the crates. No expectations, maybe just a good surprise or two. 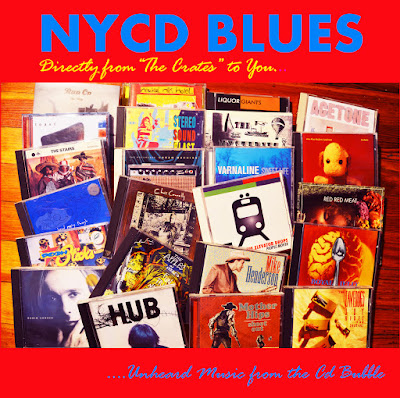 I bought 100's of them between 1994 and 1999. I didn't talk to Sal or Tony for the first couple years. I was the furtive silent dude buying all those crap cd's instead of the legit merchandise featured on the wall.

The 1996 me would never have predicted I'd be here, contributing to Burning Wood, about them, the demise of cd's as a format, and the music industry in general.
I bought my last cd from Sal in 2006. I've been hastening the downfall of the music industry, and by extension, Western Civilization ever since. 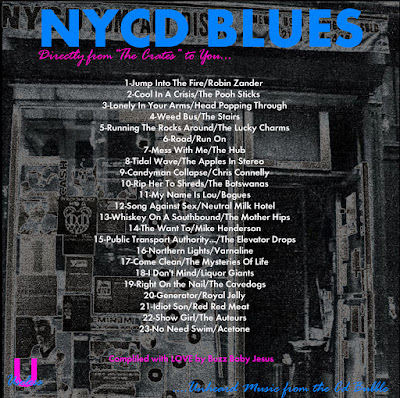 Much as I loved Cheap Trick's first one, I find this 1993 Robin Zander album to be unlistenable except "Jump Into the Fire", one of my favorite Nilsson tunes.

I don't know a thing about the Pooh Sticks (1995) except this song, which is a lot of fun. It makes me want to be cool in a crisis.

Head Popping Through (no date) is the second worst band name in this collection. "Lonely In Your Arms" is what we were hoping for, but instead received "Double Fantasy".

"Weed Bus" by The Stairs from their album "Mexican R&B"(1991). You get no guesses Who inspired them.

"Running The Rocks Around" The Lucky Charms (1995). I'm a sucker for alt psyche folk grooves.

"Road" by Run On (1996) is the best Nick Drake cover I know. This album was made without high hats.

"Mess With Me", by HUB(1998). A singer songwriter with a taste for electronica. I played the shit out of this album.

I bought more than one by "The Apples In Stereo". "Fun Trick Noisemaker" (1995) is good all the way through.

Chris Connelly's "Ship wreck" (1994) is a lot better imitation of classic Berlin Trilogy Bowie than the man himself was making at the time (Outside). Apparently he's a participant in both Ministry, and The Revolting Cocks. You wouldn't know that from this. I played the shit out of this one, too.

The Botswanas (1995) take on "Rip Her To Shreds" out performs the original.

I guess it's the jaunty music and trombone  on "Song Against Sex" by Neutral Milk Hotel (1995) that make me think of "Everybody's In Show-Biz" Kinks.

The Flying Burrito Brothers are recalled here on "Whiskey On A Southbound", from "Shooutout" (1996).
The Mother Hips is not only the worst band name in this collection, it's the worst just about anywhere with the possible exception of Christian Rock. That said I got this and the previous, "Part Timer Goes Full" (1995) out of the crates and name notwithstanding played the shit out of both.

All kinds of stuff that didn't fit found it's way into the crates. Mike Henderson's "Country Music made Me Do it"(1993) is actual Country music. Mike sings, writes, and plays the shit out of lead guitar. Popular around here.

"Public Transport Authority" does not sound like it sounds. The Elevator Drops (1997) are capable of dazzling arrangements of catchy songs. Played often.

I love a folky funky groove and "Come Clean" by The Mysteries Of Life (1997) is all that.

The Liquor Giants "I Don't Mind" sounds like the best song not found on Big Star's "Third". I played the absolute shit out of "Here" (1994), and went on to collect more of their music.

The Cavedogs "Right On The Nail" does exactly that.  This 1990 slab of astonishing pop never fails to amaze me.

Back in Alternative days Classic Rock became even uncooler. Royal Jelly (1994) was a guilty pleasure there is no need to feel ashamed about. "Generator" sounds like The Firm should have.

Red Red Meat became one of my favorite bands. I collected several of their cd's and followed principle singer songwriter Tim Rutilli into Califone. "Bunny Gets Paid" (1995) is probably my favorite crate discovery. Think of Nirvana and The Rolling Stones mixed with a dash of REM.

I found a lot of "loss leader" style comps in the crates and I bought them all. From "Patience" (Hits Post Modern Syndrome) The Auteurs, "Show Girl" (1993). A classic.

I read somewhere that Acetone had two kinds of songs: slow, and slower. I fell for their album "Cindy" (1993), and it's slow, dark, noir meets The Velvet's couch album. One song, "Louise", which reminds me of "Pale Blue Eyes", I think of as "Lou-ese". "No Need Swim" seemed like a good closer.


This jolly batch of tunes was made with Summer in mind.

NYCD Blues Too
Posted by buzzbabyjesus at 9:32 AM

Was a bargain bin diver myself. The Posies debut comes to mind as a bin discovery. Had a theory once that albums found in the bargain bins were the most influential because young teens could readily afford them, then listen to them repeatedly while they form their first bands. Recall finding both Bowie's 'Low' and 'Heroes' in a supermarket bargain bin in 1978 as a young lad, for example. Looking forward to this listen. Thanks again, BBJ!

I used to dig through the crates on the floor and found a lot of good stuff, but the knees aren't what they used to be, so I stick mainly with the tables these days. I grabbed this for the Mike Henderson, the rest is a bonus. I don't have that album of his. "Edge Of Night" is a great one, so are his albums with The Bluebloods.

Living in the sticks, we didn't have cd shops with or without bargain bins - but we did/do have church hall record fairs, car boot sales and charity shops (car trunk sales and thrift shops perhaps for US readers). Anywho, thanks for the comp job - I look forward to reacquainting myself with the Auteurs and Apples In Stereo and sussing out the others. Have a great weekend. Cheers!