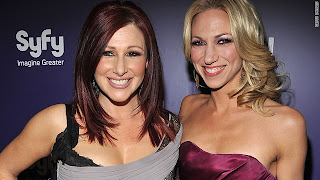 ‘80s singer Tiffany is working on tour dates with Debbie Gibson, according to the New York Post.
Tiffany, who’s currently touring for her release “Rose Tattoo,” told the Post that they’re planning to kick it old school.
"We want to journey through the '80s and all the artists who influenced us," she revealed, adding that covers of Reba McIntyre, Guns ‘N’ Roses and Stevie Nicks and even Broadway tunes aren’t out of the question for the performances. Plus, you know, their own songs, as well.
Of course, Tiffany and Gibson have already teamed up for a past project: SyFy’s “Mega Python vs. Gatoroid.” Perhaps they should consider joining their touring efforts with a few other '80s acts who are hitting the road.

An acquaintance saw Debbie at The Cubby Bear (Chicago) about a year and a half ago. She said it was just a bunch of 30-something year old women acting like (drunk) 14 year olds and having fun. Nobody took it seriously, including Debbie. She said it was a blast.

Oh my god! How could anybody have thought this was a good idea?

Oh, and thanks for the link. Had you not included it, I wouldn't have gotten sucked in and learned that Benicio Del Toro knocked up Rod Stewart's daughter. I would have felt horrible had I missed that info and not sent them a shower gift.

At first glance, I honestly thought that photo depicted Sarah Jessica Parker and her friendly doppelganger.

And as it turns out, I was right!

Tiffany doesn't look too bad, but someone should give Debbie a sandwich.

For one confusing moment, I thought today was April Fool's Day.