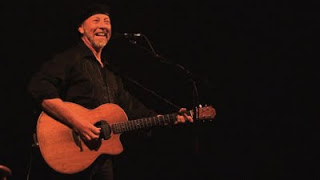 "If someone comes back to life and then dies, it's only because I got the verses mixed up."

"This is one of my songs. Thanks for recognizing me."


Such is the stuff that made up night one of what I'm sure will be three very special Richard Thompson "all request" shows at NYC's City Winery.

Everyone got a small slip of paper that said something close to, "Dear Richard, would you kindly play this song for me?" There was space for you to jot down the one song you wanted to hear. (My request was "Who Knows Where the Time Goes." It did not get played.") The slips were collected and placed in a giant ice bucket on stage. RT would take 3-4 out at a time, explaining, "I need to pace the show, otherwise we might get 5 wrist-slashers in a row."

(I should say, almost everyone got a small slip of paper. A woman approached my table and asked if anyone had an extra. She hadn't been able to offer her request. It was Richard Thompson's wife, owner of McCabe's Guitar Shop in California. I wondered why she didn't just tell him what she wanted to hear, unless she wasn't requesting a song.)

And so it began.

Opening with The Kinks' "See My Friends," Thompson began night one of three audience-requested sets that also included covers of The Beatles' "I Feel Fine," Britney's "Oops, I Did It Again," which has become a Thompson staple, and Duke Ellington's "Rockin' In Rhythm," the latter of which seemed to amuse him. He told us that when he recorded "Rockin In Rhythm" he had overdubbed three guitars, four horns and percussion, so "thanks for choosing this while I have just one guitar." Then of course, he made that one acoustic guitar sound like three guitars, four horns and percussion, like no one but Richard Thompson can.

A killer "Crawl Back," with some of the most astounding fretwork I have ever seen in my life, a rousing "Tear-Stained Letter," a wrist-slashing "A Love You Can't Survive," one each from Fairport's "Liege & Lief" and "What We Did On Our Holidays," a jaw-dropping "Dimming Of The Day," and of course, thankfully for all in attendance, a flawless and always moving "Vincent Black Lightning" made for one satisfying set of music.

(There were easily another half dozen or more I did not mention.)

The first time I saw Richard Thompson do an all request show, he played the Left Banke's "She Will Call You Up Tonight," and gushed, "I love that album. I can play the whole thing." Knowing that has kept me awake many nights. How about this residency?

"Richard Thompson Plays "Henry The Human Fly" and The Left Banke's "Walk Away Renee/Pretty Ballerina" LPs In Their Entireties."

Well, we did get "Pretty Ballerina" and its "very tricky bridge" last night and it was glorious.

I hope to have the audio from last night, as well the remaining two shows, very soon.

Until then, here's "Night One" of RT's first City Winery "all request" show.

I hope some of you are attending this evening or tomorrow evening. (I wish I was.) I don't think I have ever seen a bad Richard Thompson show, but these "all request" shows are stratospheric.

Thanks for writing this review. I wish I could write my reply in emerald green ink to match my jealous mood. Long time RT fan, and I would have sold something really dear to have attended (well, not my Lowden F23c, but that's for another blog).

Hey...if anyone is attending the next show and you're stuck for a suggestion, how about "anything by Tom Waits". A boy can dream, can't he?

you are one luck mf

How do you pick one song? I'd pick something from "Henry", maybe "Shakey Nancy".

So jealous. Saw him in a small club near Chicago recently and he was phenomenal. He took some requests, but a whole show of them! Can't wat for the audio. Thanks!

I'm going tonight! I will try to take notes.

"he made that one acoustic guitar sound like three guitars, four horns and percussion, like no one but Richard Thompson can"
So true. On 'record' even if you know it's all him it doesn't have the same jaw-dropping effect of actually seeing him do it. Lots of fun too.

One thing all non-NYC residents have cause to express envy for is the ability of NYC folks to catch shows like this. Richard's probably doing this format in other cities, I'd guess, but stuff like this just seems to pop up more often in NYC! And the club he's playing in there, based on the video, seems tiny - wow!

I've seen Richard Thompson here in Atlanta at perhaps our best venue, sound-wise, Variety Playhouse - and he's always great. I'm not much of a "guitarist fan" -- and frankly, Richard's voice dims my enthusiasm for him, I've never loved it -- but seeing that guy live is always just magic.

@Walk In The Woods

The grass is always greener...

While it may true that NYC gets a few extra "special events" that so many other cities do not, trying to see your standard concert here has become strictly for the rich and plugged in.

I play Ticketmaster like a one-armed bandit in Vegas.

If a show is $100 here, it's going to be $60 or less everywhere else. Bruce Springsteen tickets weren't even available for purchase here, yet I could have gotten a pair in Boston, or Greensboro or Detroit if I wanted them.

And that venue, City Winery...yes, very small and wonderful, and remarkably, only $40 for Richard Thompson. But for Joan Osborne it's $65 and John Hiatt was $75.

encore:
Persuasion
Werewolves of London
I Got the Hots for the Smarts
Girl from North Country

2nd encore:
[a ballad from the Hebrides Is.]

A glance at the setlist shows a lot of RT's "greatest hits" but I never once felt like he was tired of performing any song. There is no "phoning it in" whatsoever. For all the jokey between-song patter, from the first chord on, he gives 100% on every song. This is not often the case these days with long-established artists.

I'm glad I don't play guitar. After watching RT for a couple of hours I think I'd give up in despair of ever playing in the same solar system...

I second Sal's remarks re City Winery and the mixed-blessing of living in NYC. I admit to being kind of old and cranky and don't suffer bad venues or audiences gladly.
But I really like City Winery; great sound, good sightlines, respectful, enthusiastic audiences, fair ticket prices and hell, chairs! I'm sure it gets pretty expensive if you're downing the wine (and I've never eaten the food) but its a great place to see a show, at least for adults). Highly recommended when you visit our wonderful city...

I was at the Wednesday show. And while there were plenty of highlights (Beeswing, Girl from the North Country) my one complaint was the pacing. So many Richard Thompson fans are so knowledgable, they requested the most obscure shit ever. Because they are obscure loving RT nerds. That kind of bummed me out. I felt there were too many ballads that were sea-faring sounding. Basically the end of the set pre-encore was all that. And yes, asking him to play Werewolves of London might seem like a good idea, hearing it is sort of a letdown. And really, asking him to play Blackbird?

I sound like I am complaining, and perhaps I am. I've been to a few of these over the years and this was my least favorite thus far. But it still beats most nights in life!

That's how to play an acoustic guitar. I remember Peter Buck talking about how RT made you feel like a guitar novice when you saw him live.

Good point about the ticket prices, Sal. It’s interesting how for 98% of NYC’s history, this uber-gentrification wasn’t so apparent – the city had plenty of scruffy parts, certainly in the Village for sure. You’re right that post-Guiliani and certainly post-Bloomberg, money talks more than ever.

Never seen him live.
Incredible guitarist.
Must try hard to catch a UK gig this year.