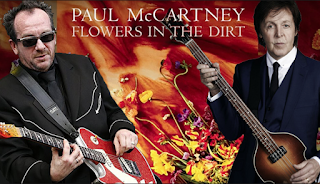 Two weeks ago today, a super-deluxe version of Paul McCartney's best record of the 80's, "Flowers In The Dirt" was released with a wealth of bonus material. By now it is no secret that, McCartney took on Elvis Costello as a writing partner during these sessions. The fruit of their labor was released sporadically on separate solo records in the years that followed, but the real treasure were the demos that appeared as a bootleg some 20 years ago. Those amazing demos have been floating around on various bootlegs for years. They have even popped up on these pages a number of times. But now, they are available officially as a bonus disc on the new CD set, as well as a lovely piece of vinyl on a 2-LP edition of "Dirt."

I am obsessed with that piece of vinyl. I have been obsessed with those demos since they first made it into my hands and I cannot stop listening to the vinyl now. The "Macs" seem to  challenge each other with the melodies and harmonies in ways that are not of this Earth. I imagine this was the same dynamic in that room in Liverpool over 50 years ago. Even as demos, the songs are complex, as if during each writing session, they refused to settle, even when they've nailed it. It would not be hyperbole if I said, those 9 demos could be on my Top 10 list of all time.

Now, three more have surfaced, first as a download only available with the expensive box, and then later, as a stand alone CASSETTE for Record Store Day.  Those tracks include "Mistress & Maid," which ended up on Paul's "Dirt" follow-up, "Off The Ground" and "Shallow Grave," which appears on Elvis's "All This Useless Beauty." But it's the third track that is the real prize. "I Don't Want To Confess" is a short, somewhat shaky and unfinished ballad, that again, leaves me frozen, mouth agape and drooling amazement. Forgive my gushing, but my mind is a bit blown, even though it was most likely child's play for these two geniuses, as if they picked up two guitars, and before Paul could finish a cigarette, a new demo was completed and ready to record. Add the fact that Elvis's voice and low harmonies are eerily similar to an old partner of Sir Paul, makes all of this something to behold.

That was great! Thanks for sharing. I can't stop listening to "Tommy's Coming Home" and "The Lovers That Never Were"; just fantastic. Epic vocals on the 'Lovers'! These demos are just so darn good.

Damn fine, man, damn fine! I wonder why they left it off the Deluxe CD??!?!

I am loving the deluxe reissue demos too. But would you mind re-upping the Maid & Mistress demo that you included in your post of Friday, October 14, 2011? I am interested in just the demo. The link is no longer working. Thank you!

The demos are great--although I wish they put them all in one deluxe edition, instead of spreading them out across multiple ver$ions.

I hadn't listened to Flowers in the Dirt itself in a long time. Really stands up. My Brave Face is a great pop song!

This really is great. I never would have thought that their voices would work so well together.