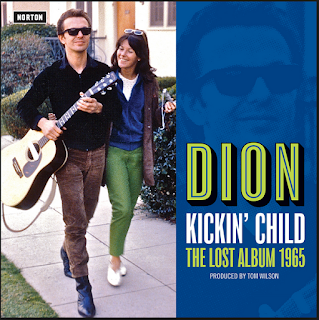 Scott Kempner's sleeve notes on the just released "Kickin Child" LP by Dion, are spectacular. I will respect his words by not trying to rewrite anything. I will say this. Norton Records and all those at Legacy, did a bang up job with this package, the lost 1965 recordings from one of the true legends of rock and roll, Dion Dimucci.

If these recordings hadn't suffered the fate of their surroundings and were released as hoped, we would probably be talking about this record the way we talk about other records from the era. Many bands were still coming into their own in 1965. The Byrds, The Kinks, The Who and even the Stones, still hadn't released any masterworks. Aside from "Rubber Soul" and Dylan's double whammy of "Highway 61 Revisited" and "Bringing It All Back Home," Dion's "Kickin' Child" plays better than the handful of classics that come to mind from 1965, like "Mr. Tambourine Man," "My Generation," "December's Children" and "The Kinks Kontroversy."

Do yourself a favor and grab a copy of this superb reissue.
Posted by Sal Nunziato at 6:43 AM

I included "Now"(track 2), an utterly fantastic song, on "Now That's What I Call Bullshit 60" (weekend mix) a few years ago. A handful of these songs were released on 1969's "Wonder Where I'm Bound". A record which got little attention or love.
I can't wait to get this one.

I love that record (Wonder Where I'm Bound) and had not heard a note of most of it before you pointed out the track "Now." But "Kickin' Child" is insanely good, mostly because of what they did with the sound, and also the sequencing and the removal of unwanted overproduction, like the strings attached to "Wonder Where I'm Bound" without Dion's consent.