Weekend Mix/ "Danger Is My Beer". 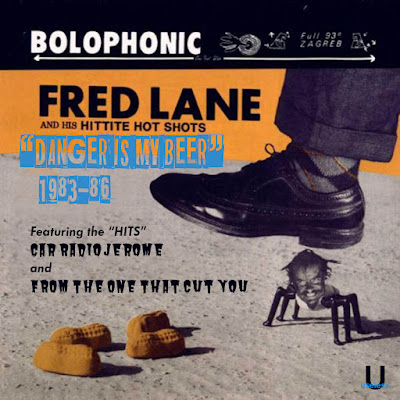 I moved to New York City in August 1988. I'd spent the last couple years playing in a band and mostly listening to '50's music. Doo Wop, SUN, Rockabilly, C&W, R&B, so I hadn't beem following much in the way of anything new.
I got a job and met a fellow artist who introduced me WFMU, and a weed dealer I'm still working with.
After the move from North Carolina I was broke.  I spent a lot of time listening to the radio with the boombox on "pause", waiting for something interesting to record. I got half of "Love Buzz" by Nirvana, heard Daniel Johnston for the first time, The Flaming Lips, and a lot of music I still can't indentify.
I didn't know what to think of "The Man With The Fold Back Ears", except I couldn't stop listening or laughing. It was impossible to determine it's origin. I was reminded of Leonard Nimoy's '60's novelty, "Bilbo Baggins", except it lacked any kind of innocence. One of the oddest things I'd ever heard, in fact.

Years later, after the invention of the internet, I started my blog, "Now That's What I Call Bullshit".
I posted about it on October 28, 2009.

I 'm not sure where I acquired the song, or why I didn't get the whole album.

It wasn't easy, but I managed to acquire both of them from an Italian blog.

Imagine that the original Mothers Of Invention hired Wayne Newton to sing big band arrangements with lyrics by Captain Beefheart.

This is right up there with "Ruben And The Jets".

It's some of the most delightfully twisted music I know. Darkly funny, Southern Gothic abounds.
The recording quality varies somewhat, and I'm not sure what kind of facilties were available or how much rehearsal was involved. 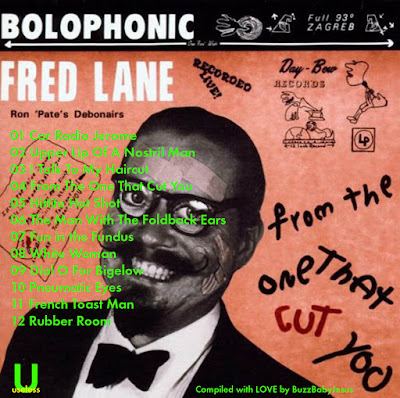 These twelve selections, taken from the aforementioned, are the most coherent and musically focused of the lot. If they'd played in Hollywood or New York, I'm sure they would have made a bigger splash.

The songs are solid and Reverend Fred's a fine singer. His Elvis impersonation on "Upper Lip Of A Nostril Man" rivals Andy Kaufman's.

"Reverend Fred Lane is the stage name of the Tuscaloosa, Alabama born singer, songwriter, and visual artist T.R. Reed (Tim Reed), who released two relatively obscure yet critically appreciated albums in the 1970s on Say Day Bew Records, later re-released in the 1980s on the Shimmy Disc label. These albums explored various traditional genres of American music such as jazz, country, and big-band swing, but infused with improvisational experimentations and Dadaist free-associative lyrics.

Lane was involved in the conceptual music scene at the University of Alabama in the city of Tuscaloosa in the mid-seventies. He was a member of the Raudelunas Marching Vegetable Band collective, influenced by the ’pataphysical theories of Alfred Jarry. Subsequent "bands" included the Blue Denim Deals Without the Arms," The Raudelunas Arm Band and The Marching Booly Band. He played flute and alto flute for the improvisation company "Transcendprovisation" and appears on the 1976 Transmuseq LP release, "Trans."

His stage persona displayed a devilish grin, goggle glasses, a well-oiled goatee, and various band-aids applied to his cheeks and scalp. He wore a black Tuxedo coat over boxer shorts. He authored comic books and chapbooks including "Liquid Basketballs" and "Naked women Overthrow the Government Quarterly."

He released two albums in the early 1980s. From the One That Cut You, credited to Fred Lane & Ron Pate's Debonairs, was inspired by a somewhat illiterate threat note found in a 1952 Dodge Panel truck. Ron Pate's Debonairs was a big band that included noted Alabama-based free improvisers Davey Williams and LaDonna Smith, both performing under aliases. ("Ron 'Pate," also a fictional name, refers to the word "'Pataphysics," which was coined by playwright Alfred Jarry.) Car Radio Jerome, credited to Fred Lane & the Hittite Hot-Shots, navigated his band through various hard-boiled fedora film noir scenarios, and was especially noted for the memorable parody of a children's nursery song, "The French Toast Man".

Reed left the music industry in the late 1980s to devote his career to mobile sculptures." 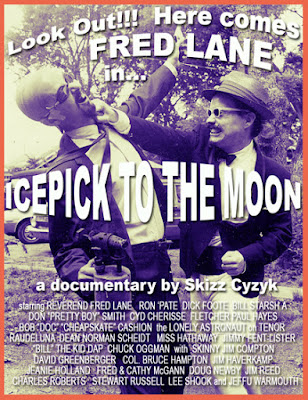 Apparently a documentary is in the works.

Danger Is My Beer

Danger Is My Beer As Well

In dark times a good laugh can be hard to beat.

Posted by buzzbabyjesus at 5:55 AM

I can't possibly ask for more. Thank you!

Good stuff, it reminds me of "Rhino Royale" and other early Rhino Records releases.

I learned of Rev. Lane and his music in the Oxford American's Alabama music issue (2010). The CD that came with the magazine included "Rubber Room". I am excited to hear more, and I thought that you might enjoy the article, so here 'tis: tinyurl.com/y8r3mfc8