Not to be confused with a Weekend Mix. That is forthcoming.

I'm a long time fan, but definitely not a Deadhead. I like the studio recordings best. A fantastic bedrock for their epic live shows.

So many of their classics were co-authored with lyricist Robert Hunter. A fine story teller, he made some solo albums, and if he were a stronger singer, might have found bigger success.
My favorite is "Keys To The Rain".


"AOXOMOXOA"(1969) is the first album I bought. I picked that one for Rick Griffin's cover, as I'd been a fan of his contributions to ZAP Comics and Surfer magazine. He is reponsible also for "Tales Of The Great Rum Runners". 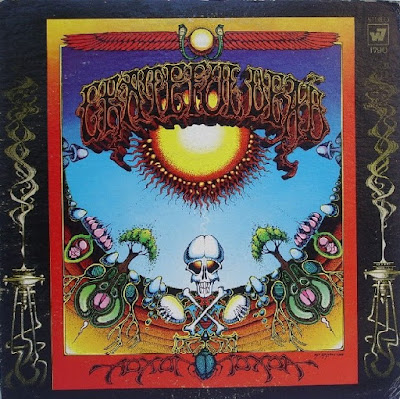 Only "China Cat Sunflower" became a set staple throughout the bands career, though "St Stephen" was played until 1971 revived in 1976 and 1977. "Cosmic Charlie" was revived and played a few times in 1976.

It was recorded twice. When a new 16 track machine became available, they re-recorded the whole thing exploring all the sonic possibilites.  They thought they had to fill up all the tracks. The band spent 8 months in the studio. Putting them into deeper debt with Warner Bros. Records at a cost of $180,000 (1,175,554 in 2016).

They hit the road with a vengeance to pay it off.

1n 1971 Jerry Garcia and Phil Lesh remixed the album, removing most of the experimental, extraneous sounds, creating tighter intros and fading out others, and in general making it sound less psychedelic and more like the albums that came later.

"Dark Star" is one of their most played and beloved vehicle for improvisation in their live shows. It began as a single recorded during the 8 months of  "AOXOMOXOA".

Here is a fine rip of the 2013 vinyl reissue "The Warner Bros. Studio Albums", with "Dark Star" as a bonus.

The original mix has never been on cd and is only available as part of the vinyl only box set.

My first copy was defintely the remix and not the original. I hear a lot of differences.

Enjoy!
-BBJ
Posted by buzzbabyjesus at 8:52 AM

I'm no Deadhead either but confess to having a stack of the live shows which were/still are freely available and I dip a toe into their waters from time to time. When my house was broken into a long time ago, the burglars helped themselves to a pile of DVDs & other stuff lying around but didn't touch my live Dead collection, showing good taste according to some of my friends! Anyway, "American Beauty" is the one that did it for me and I backtracked from there and then onward to the end. Thanks for this little rip which I won't have heard before. Cheers!