TRACK FIVE: "And I Love Her" VS. "Think For Yourself" 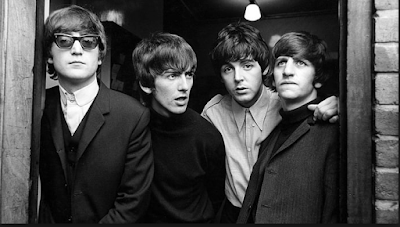 "And I Love Her," according to the New York Times crossword puzzle of July 2, 2017, is a song John Lennon referred to as "Paul McCartney's first Yesterday." I'm going to make a not so wild statement and say, I bet most of the universe considers "And I Love Her" a treasure. It's been covered countless times by everyone from Diana Krall and Lena Horne to Mary Wells and Kurt Cobain. It's a lovely tune, of course, but if "If I Fell" is going to be called out for its "awkward lyrics" and "saccharine sentiments," the simple metaphors of shining stars and dark skies, must be called out, as well, and with this particular McCartney tune, I hear nothing as brilliant as the chord changes and harmonies in "If I Fell."

"Think For Yourself" is the second Harrison song recorded for "Rubber Soul," though it appears first. To put it as simply as possible, the verses are killer, with an amazing McCartney harmony, only to be sabotaged by a terrible chorus. It's not like I skip over this song when I listen to "Rubber Soul," but it is one of my least favorite Beatles tracks.

I vote for "And I Love Her," but not because I think it's the standard it has become. I just mind it less than "Think For Yourself."

TRACK FOUR
Posted by Sal Nunziato at 6:15 AM

I agree with Sal, totally. I can hear "And I Love Her" in my head anytime, but I'd rather listen to something else.

"Think For Yourself" by a mile. I think it's a great rocker and I love the fuzz guitar. "Your future still looks...good/And you've got time to rectify all the things that you should." Love it.

"Think for Yourself" gets my vote also. It is the perfect setup for "The Word." Song sequencing definitely makes a difference. "And I Love Her" is a great setup for "Tell Me Why" in that regard.

I prefer And I Love Her. Two and a half minutes of sublime, world-class melody coupled with that simple, infectious, 4 note acoustic guitar hook. Popular songwriting at it's best.

I have to tell you that this little exercise is is killing me. It's like walking up to a Dad and asking which child he favors more. ("God said to Abraham...")
The SPLHCB re-release put me into a Beatles jag and I played damn near all their songs, major label release ones. I found myself singing along to every song, songs that are part of my past, present and future. The lyrics are indelibly stamped into my cerebral cortex. There was a memory attached to ach song. Where I was and what I was doing. Like sitting a practicing forging their signatures.

I love Pearl Jam but I couldn't tell you when I heard "Evenflow" the first time. But I do remember buying an advanced ticket for "Hard Day's Night" at the movie theater across the parking lot from my summer job at the A&P. It was the first time I went to a movie alone.

Put me down for them all.

I have an admitted soft spot for "And I Love Her". For me, it's the melodies of the Beatles' best songs that make them timeless.

Pat Metheny does an instrumental only version that knocks me out each time:
https://www.youtube.com/watch?v=MYcZ6s3z1jg

I have to go with AILH, because I fully agree with the concept that the chorus sucks on TFY (which is unfortunate because the rest of the song is great...)

TFY is one of those songs like "Runnin' Down A Dream" where the verses are much more melodic/interesting than the chorus and the song suffers because of it.

When in doubt I always go with the rocker so put me down for "Think For Yourself".

Both song have their faults ("Think" with George's flat vocals and "Love's" simple lyrics) but overall great songs.

This voting is such dumb fun but I'm having a blast doing this.

At the risk of sending this post into the wrong direction, I need to say, MAN do I love Tom Petty and BOY, do I hate Running Down A Dream. Forget the lousy chorus, Shriner, I can't get beyond the guitar intro, "Boo NEE nu NEE nu NEE nu NEE nu." Nice pull.

I thought I'd be one of the few who prefer "Think for Yourself." Looks like I was wrong. Nothing wrong with "And I Love Her"--I just prefer George's tune.

"And I Love Her" gets my vote.

It's been so long since I even had a copy of "Rubber Soul", that I couldn't remember anything about "Think For Yourself". Totally filler.

my vote, george's "think for yourself"

I like George's songs from this period. Think For Yourself for me.

I gotta go with Think for Yourself. Agree with liking George's songs from this period.

I do often "Think for 'Myself' George, thank you, like your song but...And I Love Her is my favorite song. I didn't say it's the best Beatles song or the best song just my favorite song. Since I was a toddler, I'm loyal, it took my heart I never got it back.

And I Love Her. I am blanking on a gospel group that did a version of this song (I think) something "brothers." Do I remember this correctly? joe

I like comparing this game to "Sophie's Choice" -- which child will you give up? Tell me now, Meryl Streep or we'll destroy BOTH songs! Bwaaahahahaha!

Unlike "If I Fell" -- which I believe has pretty complex and unexpected emotions behind it -- "And I Love Her" is pure spoon-moon-June stuff, just a silly love song. (Everyone...) And what's wrong with that? John's right to call it Paul's first "Yesterday;" the melody is that good. And complex is not always better than simple. The melody is achingly lovely, the vocals earnest to a t and the arrangement is jewel-like in its seeming simplicity, though I understand some of the guitar work is quite intricate. Love the Spanish guitar (?) solo, the precise percussion and does someone start humming ever so slightly towards the end? Simply unstoppable. I don't think much of it until it starts to play and then I immediately think, "Good God, another Beatles classic and they have so many I almost forgot this one." Here's one for the ladies (and the lads that dare not speak their name).

"Think For Yourself" is pretty great, a snappier, smarter spin on the sentiments of "Nowhere Man." The fuzz guitar is nasty, the arrangement unceasingly intricate without ever breaking a sweat. Pity about the chorus.

""And I Love Her" crosses the finish line first, distance ahead to remain unmentioned.

Joe, it's the Holmes Brothers. Look up their version of Cheap Trick's I Want You To Want Me. It will knock your socks off

Think For Yourself. I have no issue with the chorus. Always loved the little stutter at the end. And I Love Her is lovely and George's little downward riff is perfect but it's too sleepy to really groove on. And I've always hated Yesterday.

You just beat me to it, Sal. Here's the Holmes Brothers' version: https://www.youtube.com/watch?v=JH3O1O76aAg

Count me as a vote for "And I Love Her." If it were so easy to write gorgeous melodies, more composers would do it.

I don't even have to think for myself, one more vote for 'And I Love Her'.
Intro and arrangement, what's wrong with popular votes?

It's kind of hard to compare a ballad to a rocker, but if I have to choose I'd go with And I Love Her. After all, it was cool enough for Bob Marley to cover, back in the Studio One days.

"And I Love Her" easily. I read somewhere that George composed the guitar riff. That riff makes the song, so a vote for it doesn't slight George here, it credits him for a great guitar line.

AILH. In memory of Esther Philips and her fabulous version ... here introduced with high praise by John Lennon:

Think for yourself "Fuzz Bass"

And I Love Her. Instantly memorable, and beautiful. Uhh.. what's the name of the other song again?

And I Love Her- one of Paul's early peaks as a melodist. Spare, effective accompaniment (especially compared to the full drum version they tried out earlier, heard on Anthology 2). It also benefits from the association to the film version, with the innovative use of the camera circling Paul. Think for Yourself has a lot going for it, but it's still George before his peak as a writer and has a somewhat sour disposition as a whole.