How I Spent My Summer Vacation 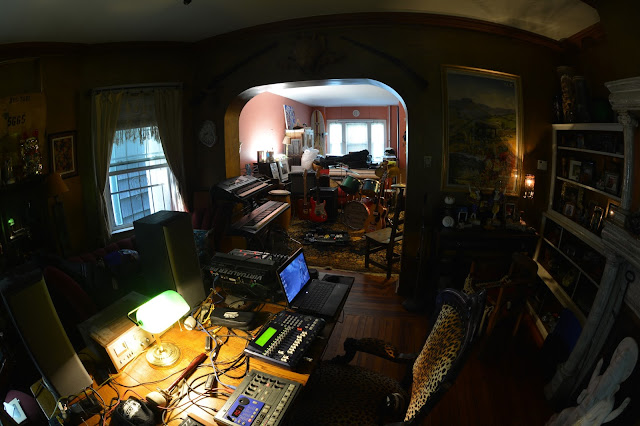 When I was 13 and mowing my folks lawn, I'd daydream about having a recording studio, and playing all the instruments like my idol, Paul McCartney. I knew The Beatles overdubbed extra parts, and "McCartney" had just come out.
I imagined arrangements in my head without knowing a lick of guitar.
I played trumpet in school band, and could read music.
After high school, I traded my horn for a pawn shop Teisco guitar, Fender Champ, and a book of chords.
I didn't have money for lessons, and I had no interest in being taught "Mary Had A Little Lamb", or "Little Brown Jug", on guitar, by some guy. I just wanted to rock. Big power chords, feedback, and noise. Why learn scales?
Of course If I'd had lessons I would probably know how to play "Stairway" by now.
But I've never been interested in learning other people's music. I wondered, instead,
How did they get that sound?

Punk Rock gave me permission. I sat behind every drum kit I could, and as the shittier guitarist, got relegated to playing bass in the garage.

In 1980, I co-founded King James and The Bible Burners, as Wally Diamond. We played a gig or two in Hollywood, well, Chinatown, at The Hong Kong Cafe, and The Cuckoo's Nest in Orange County. We got the plug pulled on us when Keith Morris (Circle Jerks) joined us for our un-solicited encore of Jayne County's "If You Don't Want To Fuck Me, Fuck Off".
I was so amped on Black Beauties that when my friend said, "Wally, there's guys here that want to kill you", I went looking for them. I ended up chasing a skinhead across the parking lot and throwing a beer bottle at him.

In 1985 I sold a painting and bought a Fostex X-15, one of the first cassette 4 tracks.
That "Nebraska" was recorded on similar equipment had a big impact on me.

Since then, with a few breaks here and there, I've been in some kind of band. I recently broke up The Smoove Sailors over silly politics which sucked all the fun out of it. I brought all my gear home from the rehearsal space we'd rented since 2006. There was no place to put it except the living room.

I set up the recording gear in the dining room and got to work as a "solo artist".

Here is something I just finished. It started as a Foglizard riff, but we didn't get around to it.
Paul McCartney, I ain't, but Sal's busy and it's Monday.

And besides it's less than 3 minutes long.


Posted by buzzbabyjesus at 8:29 AM

Good stuff. I still really dig the Foglizard comp. Always a nice surprise when a song pops up at random on iPod.

Cool story, and I enjoyed the song you posted (that melody kinda sticks with you, a bit hypotic). I can't play any instruments, or craft songs, so I'm always in awe of those who can. Thanks for sharing BBJ!