To Make A Short Story Long

In 1989, I was asked to collaborate with two other writers on what was being planned as an "unofficial sequel" to the 1977 anthology comedy, "Kentucky Fried Movie." One of the two writers hired for "Free Range Chicken," was a friend of mine, a struggling actor and comedian, with a heart of gold. Any opportunity that came his way, bit parts in low budget movies, or even a 5 minute slot at The Improv, always found him trying to share the spotlight and get a friend or two involved in some capacity. He knew I had already written three comedies, as well as a one-act that he was determined to star in, even if it meant performing it on the street by himself, so he suggested to the producer that I should be the third writer on this movie project. He never gave up and no one was more supportive. The producer said yes. 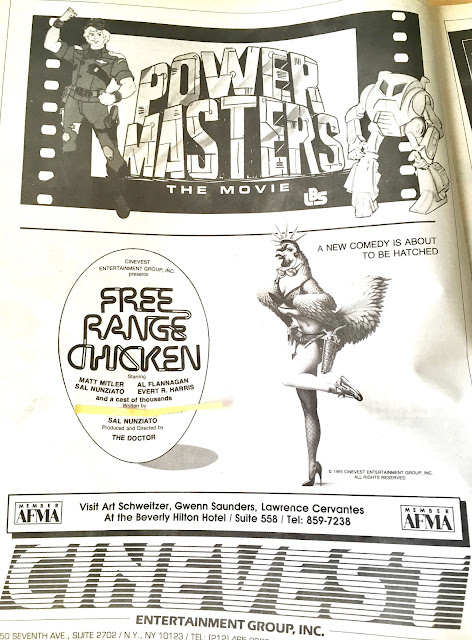 An ad was placed in Variety (see above) and we were on our way. I was already working on two skits, so I brought both of those to the table. One was a parody of The Godfather, specifically the scene in the restaurant where Michael shoots Virgil Solozzo and McCluskey, the police captain. The one joke I remember was delivered by Sonny Corleone, after Tessio explains how the weapon would be planted in the men's room.

Sonny:
The weapon better be there. I don't want my brutha coming outta there with just toilet paper stuck to his shoe.

Michael, finds the weapon and it's a boomerang.

Another bit I already had in the can, was a trailer for "The Bible," an epic film based on the book of the same name. This trailer had Robert DeNiro as Travis Bickle, reciting Psalm 23.

You may not find these bits funny, but the two writers thought these were hilarious and that was what I was looking for. I felt great and the writing sessions commenced. For the next month, I had been making both writers crack up, yet everything they read to me, left me cringing from embarrassment. One bit in particular, and the straw that broke the camel's back, was about a super hero named "Condom Man," who would pop up in the middle of an intimate moment between a young couple and with a high pitched "Mighty Mouse" voice, squeal, "Wait! I am Condom Man! Are you protected?" That was it. No other real jokes. Just some deliberately written gratuitous nudity with plenty of "Ooh baby, touch it, touch it"-type dialogue and a guy in a latex leotard appearing to shout out his advice. They laughed and laughed and I would sit there, feeling the hives grow all over my body, not to mention the guilt. This guy was a friend of mine, showing nothing but support for me, and here was I thinking how he should be fired. What these guys were writing did not make me laugh. Not once. You may be thinking, "Condom Man is a laugh riot. Nunziato's a dick." (Sometimes, in two unrelated moments.) Well, I mentioned "Condom Man" to a dozen people in 1989 and all were just as mortified as I was. I quit.

I haven't spoken to my friend since. The movie never got made. I still have the copy of Variety, which I found last week while digging for some photos I took of Queen at the Beacon Theatre. This is why I was reminded of all of this. (And, no luck on finding the Queen pics.)

The new record from Gizmodrome dropped last week. It's a super group of sorts, featuring Stewart Copeland of The Police on drums, Mark King from Level 42 on bass, Vittorio Cosma, keyboardist from the Italian prog band, P.F.M., and the star attraction, at least for my purposes, Adrian Belew, guitarist extraordinaire, session man, and a fantastic pop writer and singer, in his own right.

What could go wrong?

Well, for one thing, almost all of the songs are written and sung by Stewart Copeland. This is all I really needed to know. Before I even dropped the needle on the wax, I felt taken.

I don't know much about P.F.M.'s music, but if Gizmodrome had been left to the devices of Cosma, some old-fashioned prog-rock might have sounded pretty damn good in the hands of these musicians.

Aside from the MTV hits of Level 42 and a few tasty album cuts, I don't know much else of Level 42's music. I do know Mark King's vocals and bass playing on those records was pretty damn good, and some exciting funk-infused pop and jazz might have sounded, well, pretty damn good with King in charge and this line-up behind it all.

As for Belew, I realize his experiments with sounds and effects on his guitar aren't for everyone. But I love what he has done with everyone from Zappa and Bowie, to King Crimson and the Talking Heads, to the unique power pop of his bands The Raisins and The Bears, as well as his own killer solo albums. His voice, at times, can invoke Roy Orbison and his songwriting, when straight, is very Beatle-esque. I would have taken any one of these styles being played by these four musicians.

I honestly don't know how I made it beyond the opening track, "Zombies In The Mall," posted for your listening displeasure up top. It's been a long time since a song has made me this angry. I was about to lift the tonearm, but thought that a bit unfair to Adrian Belew. Side One did not get any better. There are moments of music that grabbed my attention and I was sincerely pulling for "Gizmodrome." But the minute Copeland opens his mouth, his smug and unfunny lyrics and delivery, send me into a twitch.

In retrospect, I don't believe for a nanosecond that "Free Range Chicken" would have gotten made if I had written it myself, or if three other writers were involved. Something called "Free Range Chicken," directed by "The Doctor" was doomed from the start. "Kentucky Fried Movie" wasn't even very good, so who needed a sequel? But as I listened to "Gizmodrome," every song reminded me of "Condom Man." If anyone reading loves this record, or can somehow convince me to listen to Side Two because "it is nothing like Side One," please say so. But as of today, "Gizmodrome" is the most disappointing thing I have heard in ages and all I am thinking about is how Belew, Cosma and King should have just said, "We quit, Stewart."

Good decision ... to quit the movie. I don't know of anyone who actually made it through the whole Kentucky Fried Movie. "Intelligent comedy" is mutually exclusive from everything that was in that movie or its sequel would have had. Your writing wouldn't have appealed to the same audience.

But, still having your name listed as actor and writer probably felt good back then.

As to the new record, I agree, it's always the drummers fault.

With a band with actual vocalists aboard, why would you saddle it with Stewart's vocals?

I was fine with Miss Gradenko, kind of worked as a palate-cleanser on Synchronicity, but Sting's vocal help apparently was key there.

You can't blame Copeland for wanting to have some fun, but no need to inflict it on us. Belew is such a wonderful singer...he's right there...WTF dude?

Which reminds me, why isn't KC's "Discipline" available on any streaming service?

Anyway,appreciate the warning Sal. Looks like you dodged a bullet with the chicken movie, but always interesting to hear about your Brilliant Career!

Sal, what you said.

Being a huge Belew fan, I was crushed - so much potential.

Not surprised though as I read an article somewhere online that it was Copeland who contacted the others to convene and record the album - made it sound like it was his project from the git-go.

Still Stew, how 'bout letting someone else sing a song or three.

this is the best review I've ever read.

I had the opportunity to, er, acquire Gizmodrome, but passed, knowing Mr. Copeland was the singer.Super Groups rarely make super music.

Vittorio Cosma is not listed as a current or past member of PFM on Wikipedia, although his page claims he was on 4 tours with them, and contributed to "Miss Baker" (1987).

On PFM:
I heard "Celebration" on the radio and bought their first American release, "Photos Of Ghosts" (1973), which I loved. I didn't like "The World became The World" (1974) nearly as much, and the next one "Chocolate Kings" (1975), not at all.
"Photos Of Ghosts" was really songs from two 1972 Italian albums, "Storia Di Un Minuto", and "Per In Amico", with typically over-ripe Pete Sinfield lyrics. The original albums are much better. They sing better in Italian. Anyway here is a real beauty to erase Gizmodrome from your memory: Per Un Amico (For A friend).