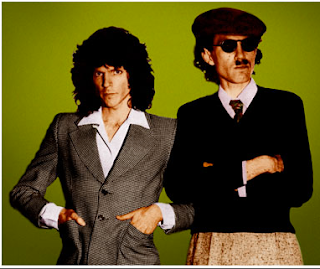 Yes,  I am one of those that simply does not get "Trout Mask Replica" and now I am asking you to get two odd brothers from L.A., who have been making commercially suicidal records for over 40 years. Ron and Russell Mael have been doing exactly what they want from the the very first notes of their debut as Halfnelson. When the demos for that record were handed to Todd Rundgren for production duties, the Maels were expecting anything but what Rundgren had to say, which was, "It's fine the way it is." Maybe it was that initial kick of approval that set the Maels in motion for a career that has been as diverse as Rundgren himself. Quirky pop, hard rocking glam, techno, disco, baroque and opera have all been taken on across a 40 plus year span that includes some of my favorite records of all time. And it's rare when an artist can release a legendary glam masterpiece like 1974's "Kimono My House" and then release one of the best records of their career, the critically acclaimed "Hippopotamus," 43 years later.

This mix was not an easy one to compile. At no time did I think, "I love this song, but it might not go over well." I was mostly thinking, " I love all of these songs, and none of them will go over." My feeling is, you are either in or your out with Sparks.

It took all I had to not include all of "Kimono My House" and then work around that, which is a method BBJ often uses on his mixes. I like that method a lot, but there was too much I wanted to include. I left off the band's biggest hit, "Cool Places," the duet with Jane Wiedlin of The Go-Gos. I don't mind that song, but if there was one song you already knew, it was that one, and thankfully, that song does not represent this band. As a matter of fact, I don't think any one song or album represents these geniuses.

Maybe you'll hear what I hear, like the powerhouse of the opener, their signature song "This Town Ain't Big Enough." Or, the brilliance of the dynamics in "My Baby's Taking Me Home."  Or, the hilarity of "Dick Around." And again, I will use the word "genius,"especially when referring to the subject matter and execution on "What The Hell Is It This Time."

Anyway, here goes nothing! It is by no means definitive, but I like it.

TRACKLIST
This Town Ain't Big Enough For The Both Of Us
Tips For Teens
Dick Around
Scandinavian Design
At Home At Work At Play
I Bought The Mississippi
Wonder Girl
Goofing Off
My Baby's Taking Me Home
Hospitality On Parade
Lighten Up, Morrissey
Never Turn Your Back On Mother Earth
When Do I Get To Sing "My Way"
What The Hell Is It This Time
Amateur Hour
Don't Leave Me Alone With Her
Suburban Homeboy
Under The Table With Her
Hasta Manana, Monsieur
I Predict

I have tried various Sparks albums before and they do nothing for me ("It's not you, it's me").

But, that said, I really liked FFS. But maybe that was more FF and less S?

So I'll give this a shot sometime...

Sparks were always on the radio when I was a kid growing up in SoCal. I never turned them off, but never sought them out either. So I give this a shot. Cheers.

Hard to compile a favorites, but I think you did a fine job.
I would've thrown in Piss Off from FFS, that album is another of their best coming so late in their career.

This was going to near impossible. A Volume 2 next week? I would have included "Tits," perhaps one of the saddest Sparks songs. Something from "Plagiarism"? "Talent is an Asset"? "All You Ever Think About is Sex"?

I've often thought that the Mael's back catalog could be mined for some sort of theatrical Reveiw, ala Jaques Brel Is Alive and Living in Paris.

I bought a copy of "Kimono My House" when it came out. I bought the cd. I've never listened to more than a side at a time, because I'm not crazy about the vocals, but I like it anyway.
"Propaganda" has one of the best album covers ever.

I'm going to give this a whirl.

I first heard the Maels as Halfnelson. This song was on an Warners "Loss Leadwer", and I've always liked it.

I was in high school when "Woofer..." and "Kimono My House" came out & I got them both. I think my teenage brain was attracted to the transgressive lyrics & I didn't give much thought to the music. I'd largely ignored them since then, but this collection is very entertaining, lyrically and musically. Guess I'll have to take another look.

BTW, according to his Wikipedia entry, Russell Mael was the quarterback on his high school football team. Wikipedia's not always a reliable source, but I really hope that's true.

I've been back and forth with them forever. It's been a while although I was into some of the stuff they did with Franz Ferdinand. They always have something to offer but I find it something akin to eating too much chocolate cake. I think it's time for another piece.

I have not listened to them in years

I gave it a shot and made it through 10 songs.

Smashing stuff! Back when dinosaurs ruled the earth I bought the "Kimono My House" LP because of the cool cover and the play on words (which I recall patiently explaining to some of my less interested mates) and the album tracks getting late night radio play. Dipped in & out of the boys' music over the years & their latest is a bit of alright. Nice job with this mix. Many thanks.

Russ Mael was indeed the quarterback of the Palisades High School football team -- and a BMOC. He usually wore his letterman's jacket around campus. I had no idea either of the Maels were musicians until A Woofer in Tweeter's Clothing came out (Halfnelson eluded me).

I always enjoy Sparks when I listen to their new albums...and yet rarely listen to them a lot. That seems to be a running thread. How would one describe an act that is always worth a spin but never makes a permanent home in your brain? Maybe it's the humor and the rock n roll resistance to humor as not quite appropriate for serious rock n roll. (The same prejudice exists in literature.) Excited to hear this compilation which I will play and enjoy and then perhaps not listen to for a long while. I wonder if Rosemary Clooney ever listened to Kimono My House. I hope so.

As for Wikipedia, I was gonna suggest to J Loslo that in fact Wikipedia is a great resource. Again and again, their entries have proven typically just as reliable (if not more so) than standard encyclopedias in terms of general information and accuracy. Even better, unlike traditional encyclopedias which asked you to accept everything as gospel truth, Wikipedia entries can and often do link to the sources for their quotes and information. So you can go to that and see who wrote it and how THEY know. So I went to the Russell entry to see their source for saying he was a quarterback in high school...and they had none! Or rather, the linked to site claims to reprint a Melody Maker article from 1974 and does include quotes and info on them which one can take with a grain of salt. But if there's a ref to him being a quarterback , I missed it. Still, it's nice to know their little factoid doesn't have any convincing proof (unlike an encyclopedia) and I was going to boringly point this out when Dave F steps up to say he apparently went to high school with them!! Do tell, Dave!

They are a fun band who are chameleons and have paid the happy price of being cult favorites ever since.

I little late, but... I never listened to them, I never cared much for the singer, and his falsetto didn't help.

I gave it two full listens, mainly because your enthusiasm and the song titles. I looked up the lyrics to a few songs, they're pretty funny, and I liked a few songs. But the vocals did me in.

A lot of the arrangements were sort of Queen-like to me and I thought I might have liked the band if Freddie Mercury were the singer.

I'm ashamed to even admit this, but I didn't listen to Hippopotamus until this week. You know I love Sparks and have seen them live a number of times, including on the Hippopotamus tour (which was great). I can't explain why I never listened. I didn't want to be disappointed? Who the hell knows. Anyhow, my brother finally convinced me, saying that it was his favorite Sparks album ever, and, as Frank Romano would say, "Holy Crap!" I'm stunned. It's unbelievable, and I can't believe I wasted 2 1/2 years *not* listening to it. I mean, it's insanely good.
I think you're spot on about either getting the band or not, though. I want to tell everyone in the office to listen but it's almost too much work to explain the band ("No, it's just Sparks...not The Sparks," etc. etc..), so I'll just preach to the choir here and at home.
Seriously. Such an amazing album.