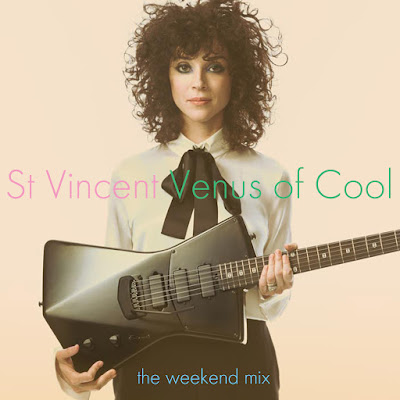 It's really unusual that an artist I like wins a Grammy, or is even popular. Or alive, for that matter.
Almost all my weekend mixes concentrate on the (mostly early) '70's, and imply that music used to be better.

Last Saturday I heard an interview with St Vincent (Annie Clark) on The New Yorker Radio Hour (WNYC, no apologies). I'd heard of her; with comparisons to David Bowie, "prog", guitar player of interest, and that she'd been involved in designing a line of guitars for women and girls.
I liked hearing her talk about her art so much,  I wanted to hear it and regretted passing up the opportunity to download "St Vincent" (2013) which turned out to be the Grammy winner.
One reason was her collaboration with David Byrne, of whom I'm not a fan, but that's another story.
Later that day I downloaded "Masseduction" (2017, just out).
Before I'd heard it all the way through, I downloaded "St Vincent", and then did some research.
I found reviews of other releases on various blogs, and in each case the writer loved whichever album, but liked the one previous better. Something I'm often guilty of.
One mentioned, "Northern Lights" a favorite song from his take on her "best" album, "Strange Mercy" (2011). I needed to hear the guitar noise, and solo at the end.
Within minutes I'd acquired it , and "Actor" (2009). Still working on "Paris Is Burning" (2006), and "Marry Me" (2007).

I do my best listening in the car and the kitchen. I've heard all four in their entirety every day since, which is unusual for me as I'm usually playing random shuffle. Never full albums all the way through, while taking notes. For some reason I needed to devour this music as fast as I could.

"Masseduction" might be best so far, but I like them all for their differences.
I'm reminded of Bowie, Prince, XTC, Eno, Lennon, Kraftwerk, Bill Nelson, Glam, Prog, even a little B. Wilson, and pretty much everything else I love.
Her voice is a fine instrument, gliding all over the place with apparent ease.
I want to believe everything she says.
She has chops and her guitar is angular noisy fun. There is a hook around every corner.
I often comment about giving a song 30 seconds to sell me.
That doesn't work with her music. In just about every case, the first 30 seconds bear no resemblance to the last. Or the middle, hence the "prog" reference. Every song is a tiny miracle.
I can't wait to see what she does next.

I don't know how long this infatuation will last, but for now I'm hooked. 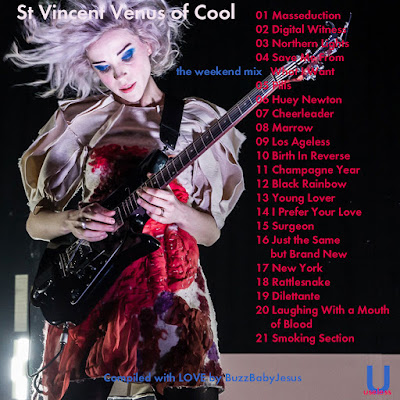 -BBJ
Posted by buzzbabyjesus at 6:50 AM

This is great! I know I mentioned to you how I had heard a record and hated it, so I never bothered with anything else. It was the David Byrne record! I forgot it even existed. Looking forward to this.

Haven't heard the Byrne, and don't plan to.

Did she design the guitar in the first photo? It's beautiful...
And thanks for the mix, Buzz. She's one of those I just don't seem to have gotten around to listening to in any depth.

The guitar is her design.


I'm really trying not to be stuck in my old comfortable rut and this mix is just what I need. I too tried that David Byrne and didn't get it so gave up.

I can't imagine what the Byrne collaboration sounds like and I don't want to know.

L.O.V.E. St. Vincent!!! Thanks for this share. In the spirit of reciprocity:
Her cover of ‘Emotional Rescue’: https://youtu.be/vOzC_q4357c
And a live performance from SNL that i find so Berlin-era Bowie: http://www.dailymotion.com/video/x1vkehj
I hope you enjoy! And thank you again.

I too will give this a shot. I remember her playing with Nirvana at the rnr hall of fame a few years back. I was intrigued then. Thanks for this....

I was vaguely aware of her but don't think I've ever heard anything by her. I'm about 8 cuts in and I think I'm sold. Can't wait to get through the rest. Thanks for sharing.

I'm late to the party but many thanks for the mix. St Vincent's appearances on some of your tv chat shows have been mesmerizing, probably more visually than audio-wise & this mix will allow me more than the perfunctory listen I've given up to now. Cheers!