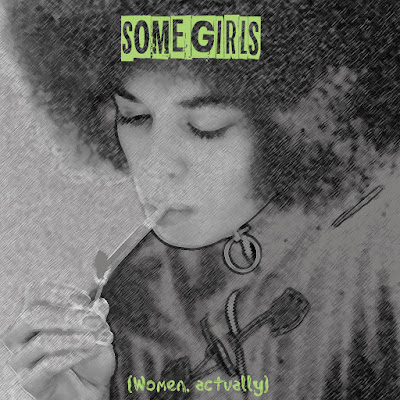 St Vincent reminded me that my record collection is largely a sausage party. All my Weekend Mixes, with the exception of Fairport Convention have reflected this.

The last 12 months, what with "Access Hollywood", pussy hats, Harvey Weinstein, and #me too, have provided a lot of opportunity for reflection.

I don't really ever "fit in" anywhere, and particularly with "the guys", unless we're holding musical instruments, and even then it's always more interesting when women are involved.

I've always been too shy and insecure to pull a "Weinstein" on anyone, and besides I don't know why a person would treat another that way.

Joni Mitchell was my first girlfriend. A room mate had "Court And Spark", and because I'd heard "Raised On Robbery" on the radio, I put it on, studying the lyrics.
I fell hard for her.
It wasn't long before I had "Ladies Of The Canyon", and "Blue".

"Carey" is one my all-time favorite songs, and I'll never tire of it even though I could type out the lyrics in their entirety from memory right now. "The wind is in from Africa," etc.

For your pleasure I've included the original of "Twisted", by Lambert, Hendricks, And Ross.

The Slits "Cut", (1979) hit me like a ton of bricks. It probably gets more play around here than anything else from that era, including the Clash and Pistols.

My parents had a Capitol Records compilation which kicked off with Ella Mae Morse's "Cow Cow Boogie". It was the second single released by the label in 1942 and their first number one/million seller. She sang it in a single take, thinking it was a rehearsal.

Jackie DeShannon and "Put A Little Love In Your Heart" will always have a space in my parking lot.

La Roux and Janelle Monae were originally found with my teenage daughter in mind, but she prefers K-Pop.

This version of Fiona Apples "Window" was held hostage by Sony and rerecorded for "Extraordinary Machine".

Laurie Anderson's "Mr Sharkey" is mistitled (Mr Heartbreak) and is the grand finale.

Cakelike's "Bum Leg" is a bonus track that cracks me up every time.

Eight decades are represented here. It's not a complete overview of anything, or even a "Greatest Hits", but a bunch of tunes which indicate what kind of girls I like. All kinds.

Sugar, spice, and everything nice. Indeed. 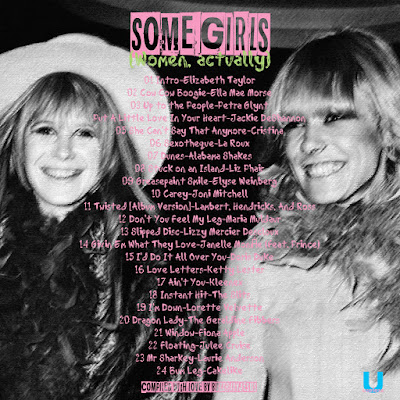 Put a little love in your heart.

-BBJ
Posted by buzzbabyjesus at 5:34 AM

I'm on the road this week. Can't wait to get back to the mothership to listen to this mix.

And I have to tell you BBJ how much I enjoy the St. Vincent mix. An artist I "tried" and let slip away. Good to smack me upside my closed mind.

...er when she dropped in on Neil Young’s tequila-soaked Tonight’s the Night sessions in 1973. “One night Joni Mitchell came in and did ‘Raised on Robbery’ in the most sexy and revealing version that song ever had,” Young wrote in Waging Heavy Peace. “She still refuses to let me release it. I don’t know what she was thinking when she joined us and sang the song. It kicks ass. What the fuck was that about? It was funkier than anything she has ever cut. A total gem!

You had me at "my record collection is largely a sausage party" so I couldn't resist this all female (nearly), eccentric, decades-spanning mix of well known & lesser known (to me) artists - a fab bundle. Many thanks for zipping it up. Cheers!

This looks like just the right thing today! Thank you BBJ!