Too Much Junkie Business 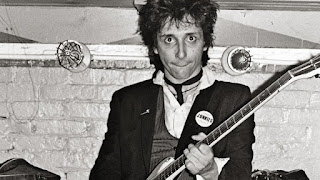 Johnny Thunders is possibly the most tragically squandered talent and disappointing artist I can think of.
I love both Dolls albums, The Hearbreakers (Lost '77 mixes), and to some extent "So Alone".
He had the looks, a distinctive, if limited guitar sound, and a knack for writing simple, yet memorable songs.
The first song I learned to sing and play was "Sad Vacation". It was one of my signatures with my band, The Crack (1987-8), the other being "You Don't Miss Your Water". A song I learned from another junkie of unrealized potential, Gram Parsons.
I confess I always took credit for writing them, which many audience members believed. We pretended authorship of all our covers, in the silliest of ways like, "I wrote this song for The Rolling Stones, in 1968", when introducing "Dear Doctor". We also wrote "Heroin" for The Velvet Underground.

I keep thinking of a line by Wayne Kramer in "Please Kill Me":
"We had an expression we used to say about Johnny Thunders. We'd say that he was always "snatching defeat from the jaws of victory".

When The Hearbreakers went to England, they showed everyone how it was done. None of the other bands on the Anarchy tour had the professional experience of Johnny, Jerry, Walter, and Billy.
They blew everyone away. And introduced a whole generation to heroin.
I credit Steve Lillywhite for whatever cohesion is evident on "So Alone".
Things went steadily downhill from there.
I have a DVD of "Thunders, Nolan, and Kane" which is pretty together, but it wasn't always that way.
Here is a performance for Swedish Television, taped on March 22, 1982, and never aired for obvious reasons. Fasten your seatbelts, it's a bumpy ride.

(Quoting another group well practiced in the art of snatching defeat from the jaws of victory.) I enjoyed your Jerry Nolan story.

Thanks so much for keeping the flame alive. You are doing a FANTASTIC JOB keeping all things Burning alive

Thunders made me think junkies were cool for a hot minute or two when I was 17-18...

I tried desprataly to play like him, but all I could get was loud, alas.