Still Not Off The Rails 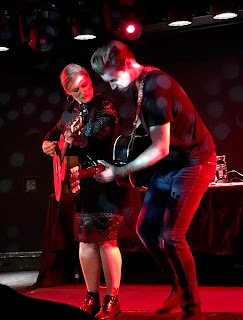 If you recall, The Rails "Fair Warning" was my favorite album of the year, two years in a row. That is how much I loved that record. Of course then, I could only be disappointed in a follow-up. So, when their new record, "There Are Other People In This World, Not Just You" was released earlier this year,  I prepared myself for a let down. And I admit, I was. But some time, and an absolutely stellar performance last night at NYC's Mercury Lounge, and I am back on The Rails, especially after hearing stunning acoustic versions of a few songs from the new LP.


I've raved and I've gushed, but that is what Kami Thompson, daughter of Linda and Richard (who was in attendance last night) and the brilliant James Walbourne, currently a Pretender, do to me. Their close harmonies, not to mention the songs themselves, whether traditional folk tunes or their gorgeous, occasionally heavy originals, can be spellbinding. The Rails played a solid hour last night, but I could have stood in front of that stage all night. 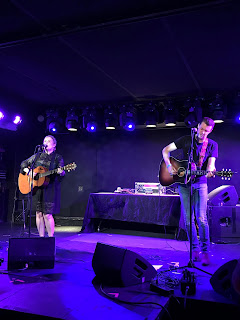 Nicely put, Sal! What a great show that was.

Sooo jealous. Fair Warning is a big fave of mine too. Pretty sure it was you that introduced us,so thanks for that. I quite liked the 2nd album, but haven't listened to it much, so I guess that means something.

The apple hasn't fallen too far from the tree. "Other People" bears more than a passing resemblance to to R&L's work on "Hokey Pokey.

I was really sorry to have to miss that one- I love their albums (yes, first more than second) and enjoyed seeing them open for the Pretenders a couple of years ago, and then do their bit as part of the Thompson family shows at City Winery (when Walbourne proved he was good at EVERYTHING- singing, electric, acoustic, keyboards). And Kami- as long as she has decent material, I'd be happy to hear her sing anytime- what a voice. They are pretty remarkable at writing new songs that sound a century old, in the best way.
Oh well- sorry to miss them, and also saying hi to you Sal! Next time.

Damn! I was gonna go to that show and got busy. Now I really regret I didn't