The Lemon Twigs Do Their Homework 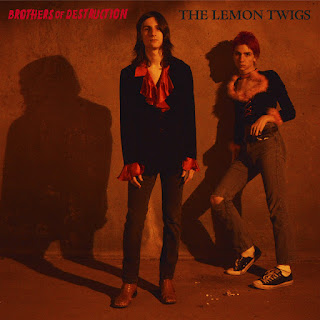 When I read Part One of Sal's review of "Go To School" I knew it was going to be good and downloaded the album, and while I was at it, their ep "Brothers Of Destruction".

I didn't listen to it before reading Part Two, and commented:
"I had exactly the same introduction to The Lemon Twigs,
and was equally disappointed with "Do Hollywood".
I adopted a "wait and see attitude" policy on the band
until they transcended their talent, and wrote some actual fucking songs."

I'd shared that late night clip with so many people I was embarrassed the rest of the album didn't live up to expectations. A lot of parts, and clever arranging that didn't add up.
I confess only listening to it once, but I wasn't just disappointed, it made me mad, so I didn't go back. If that's the best they've got, I'm out.

When Sal wrote something positive about "Brother's Of Destruction", I didn't bite. An ep wasn't going to rehabilitate them over here.

I'd just seen a review of "Go To School", where I eventually downloaded, but it wasn't exactly a rave.
I watched "The Fire" on YouTube, which I kinda liked, but decided to pass, disliking the album cover and doubting the story line more. 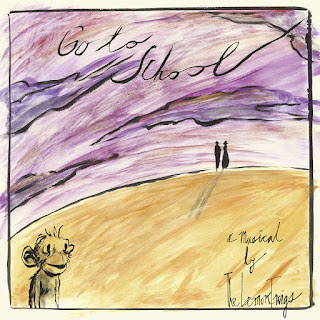 Both releases conveniently fit on a single disc.
I listened in the car at a considerable volume.
Halfway through the opener, "Never in My Arms Always in My Heart",
I knew I'd being playing the album again.
Which I did immediately.

After the 3rd time through I wrote Sal:

"It's a fucking masterpiece. It's like they heard every one of my complaints.
I love the vocals. I don't hear any 'broadway musical' vocals, but I hear people singing who've had training.
"Queen Of My School" is the deadest of Big Star ringers.
It is more "Big Star" than "In Space".
I grew up listening to a lot of Kinks, so 'music hall' is familiar territory.
The story is better than "Tommy".
"Brothers Of Destruction" is the best psychedelic ep since "25 O'Clock".

"Never in My Arms Always in My Heart" starts like the Dolls, but the verse recalls Billy Joel for a line or two, goes elsewhere, wait there's a telecaster lick Dead Flowers Keef'd be proud of, and it just goes on like that. They reference a lot of music I happen to love.

It would be a joke or worse if  they seriously didn't pull it off.
The Brothers Of Destruction are a Wrecking Crew in their own right.

The theatrical vocals which seem to stick in some craws just sound "glam" to me.
Like they're really getting their "Bowie" on.

They make the story work somehow.

"Bothers of Destruction" is just as good.

I'd recently wondered in a comment somewhere if Rock was dead.

I'll be busy playing this to death and wondering what's next.

Posted by buzzbabyjesus at 6:06 AM

I hope to soon be where you and Sal are with the Twigs - I know it's going to take repeated listenings, but that is usually the sign of really good music.

B.J., I don't know if you're a power pop fan (I know Sal is) - here's a track by one Anton Barbeau, who's been at it for over 20 years with great psych pop that Twigs fans may appreciate.

I tried -- I really did. I listened all the way through it twice (once in the car and once on a walk with headphones so no distractions.)

I liked a couple of the songs -- "Queen of My School" in particular -- it's guitar sounds is enormously Big Star. I appreciated the craftsmanship. I certainly hear the Rundgren influence all over the map on the album. I mean like *ALL OVER* the album. I fully get why Sal loves it.

I feel bad for not getting on this train because it *should* be something that appeals to me, but I couldn't figure out why it wasn't. I wasn't in a bad mood or anything.

If you don't like it, you don't like it, Shriner. But I do feel I should say this--I don't really feel like Rundgren's influence is all over the place. A few places, absolutely. But this is not why I love it. BBJ loves it, too and he isn't exactly a huge fanatic of Todd's. Cmealha commented last week about how much HE loved it. I am only pointing this out so my love for the record isn't misunderstood as some fanboy's love of all things Todd. I am the first one to call out Todd's crap, which I've done more times than not.

I've heard it about 6 times through and it only gets better. I just heard "Queen Of The Hop", marveling at the level of detail involved when I realized the first few notes of the solo quote the one from "I Am The Cosmos".

There is one song that is very Todd, which comes at exactly the right place in the emotional sequence, otherwise I don't hear him all over the map at all.

I'm not a huge Todd fan, but when he's good, he's very good.

OK, I am definitely checking it out this weekend - thanks for the tip!!

I'm hearing what I think are 10cc influences.

Perhaps the Lemon Twigs album is like a aural rorschach test. You hear what you've learned to hear. ;-)