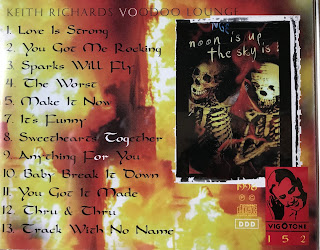 Shortly after the Rolling Stones released "Voodoo Lounge," a multi-disc bootleg of outtakes from the sessions was released. I was not a fan of that record and remember thinking, "Oh boy. Even more crap." But, I had a few copies in the shop and I did listen to some of it. It didn't change my mind and I still feel the same about "Voodoo Lounge" 25 years later. I don't like it. This just weeks before an official archive release of a concert from the "Voodoo Lounge" tour will be foisted upon us fans for silly money, I am sure.

But, it's not all bad. Disc One of that bootleg box is a real gem and I present that now, in its entirety.
"Voodoo Stew," as it was called, features Keith Richards' takes on most of the record, with a few tracks not on the record. The sound is terrific and the performances are raw, just how a Stones record should be.

If I had to pick one Stones song that epitomizes all that I don't like about Mick in the last 25 years, it would be "You Got Me Rockin'." I've talked about this a dozen times on these pages, so no need to get into it again. I'll just say, that song makes me ill. On "Voodoo Stew," we have an extended jam with, as I mentioned, Keef on vocals, and it's pretty damn good.

voodoo zip
Posted by Sal Nunziato at 6:22 AM

This is some good stuff! Thanks.

I made the mistake of buying "Under Cover", and "A Bigger Bang". They are not "the best Stones albums since "Some Girls", as the hype suggested. It's one reason why I don't buy Stones albums anymore.

I hate that song, too, but I'll take a chance on this. Thanks!

Looking forward to this!

Thanks for this. I feel pretty much the same way you do about Voodoo Lounge, and mostly BECAUSE of "You Got Me Rocking". But I heard the Keith version of "Love Is Strong" on this page and I like the idea of getting into this.

I think we both agree that Steel Wheels is really good. And I like some of Bridges to Babylon ("Saint Of Me" and "Always Suffering" are both good songs"). But Voodoo just doesn't do it for me.

Now let's see about this...

Thanks for posting this. I often wonder if a Stones song is written by Keith or by Mick. Love is Strong sounded so much like a Mick song to me before hearing this.