Last week saw the release of John Lennon's "Imagine: The Ultimate Mix," a 2-LP, 84 CD/DVD/Blu-Ray set, that offers what Mrs. Lennon thinks is the "ultimate" version of the 1971 album, with an endless supply of outtakes and alternate versions. One version of that record is all I really need, but I was intrigued by an "ultimate mix," so I bought the double album. In a word, meh. I don't hear much of a difference in the mix at all, and the alternate versions on the second LP, will never get spun a second time. That said---

I was listening to Lou Reed's "Rock 'N' Roll Animal" last night, and something I really do need is a proper expansion of this classic live set. 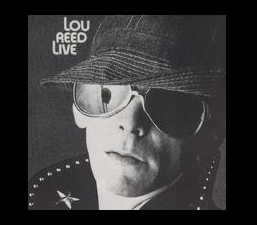 Lou Reed "Live," which was released in March of 1975 offers up more songs from this excellent 1973 concert, recorded at NYC's Academy Of Music. But I am just not comfortable with two separate records, with two different covers, compiling songs out of sequence.

How about one remastered double album, with the songs in sequence, containing the entire show? Now that's an "ultimate mix."

Is there something, an existing album or project, that you have on your wish list? A record that needs a proper release? With the current vinyl trend in full swing, complete discographies boxed up is not really what I am talking about. I wrote about The Pursuit Of Happiness' debut "Love Junk" last week, which got a smart reissue in a 2-LP remaster with bonus tracks, but as much as I love that set, it's just another recycled record, whereas the live Lou set has never been done before.

Let me know what you've got.
Posted by Sal Nunziato at 6:03 AM

My ultimate wish has been granted. The Allman Brothers Live from the Fillmore has been issued in full. Thanks you, rock gods.

I begged for a proper expanded R&R Animal on the blog. Wouldn't mind hearing the full unedited Berlin album. And a single-disc of the Beatles Xmas messages for completeness' sake.

Great idea for a post. Great call on Lou Reed. That should have been done a long time ago.

Tom Petty's Wildflowers. Was originally considered for a double album, and a bunch of songs didn't make the cut but supposedly are outstanding. Ready for a full remaster, with all the bells and whistles.

Hope that fits the criteria. Even if it doesn't, that is still what I want :)

A version of the full RnR Animal concert (from a boot?) is on youtube at https://www.youtube.com/watch?v=1ny6P1EkNCc

I've always been intrigued by the Long Ryders referencing the nonexistent Buffalo Springfield "Stampede" on the cover of the Ryders' first album. I imagine some of that has come out on Springfield boxes, but I'd love to hear a fully sequenced album.

I am extremely interested in the Kate Bush remasters coming out later this year (even thought that's the existing stuff boxed up). "This Woman's Work" was not remastered (unless my memory is escaping me...) Unless, of course, they sound exactly like the original releases.

The Lennon Imagine set really was "meh". Very little there of interest -- admittedly not a huge fan of the album, though, in the first place. It's a lot like the Ramones 40th anniversary reissues -- the demos are so close the originals -- why bother? I'm more interested in the next two McCartney "archive" series coming out -- and the White Album "deluxe" set.

A record that needs a proper release: Juliana Hatfield's "God's Foot". I'm hoping someday somebody wises up on that one.

And I have to say I'm *intrigued* by the Gene Simmons "Vault" set having read reviews of it (but that's so 2017 at this point...). But nowhere near interested enough to drop the ton of money on it to get it. Maybe if I win the lottery someday.

Troy,
I am pretty sure the expanded Wildflowers was already finished and scheduled, with a tour, as well. But then...well...

Shriner, what are the next two McCartney Archive releases?

I totally agree with your Lou Reed request. I bought Rock n Roll Animal when it was first released on lp, but didn't realize the "Live" album was from the same show until just a few years ago.

I would really love to see a new version of Marley's Babylon by Bus, with a correct song order (Exodus as third song drives me nuts), the addition of missing tunes, and a remix of it's tinny, echoey sound. They did good by releasing Boston '78, but still...

The complete soundtrack of Talking Heads' Stop Making Sense, with Cities & Big Business/I Zimbra included, would be sweet too.

Sal, the strong rumors are "Wild Life" and "Red Rose Speedway" being the next two

Every show recorded for "Sinatra At The Sands," complete and unedited, in a big friggin' box.

And along the same stylistic lines, Bobby Darin's unreleased 1964 album "As Long As I'm Singin'." All the tracks have been issued in one form or another, but most of them were remixed decades after the fact, and they're spread over several different albums.

Do you know the site "The Albums That Never Were" (albumsthatneverwere.blogspot.com)? They do cool stuff along these lines, though they've never done R & R Animal.

A live release of Kink's "Schoolboys in Disgrace" tour.

Yes, Troy, I believe the estate and fellow band-members of Petty have mentioned an expanded Wildflowers w loads of extras is def in the works.

I've always been intrigued by an official live concert of Richard and Linda Thompson's tour for Shoot Out The Lights, but maybe that's just mean.

Paddy McAloon of Prefab Sprout reportedly had hundreds of demos for songs, including a full musical devoted to Michael Jackson and another for a musical concept album about the creation of the world/universe. (We've heard bits of both of them.) Medical issues have messed with his recording and I assume there are no other vault reissues like the bizarrely rejected and yet quite lovely studio album Let's Change The World With Music. I've often wished for a boxed set of all his demos or barring that possibility for McAloon to pair with a sympathetic singer and have that artist record all those songs, which perhaps only exist on paper or in skeletal form. One does tend to focus on the same few acts, don't one?

I've always ignored most bootlegs -- it's hard enough to keep up with official releases -- so I'm not that well informed on what's out there dying to be released, perhaps. And with Dylan's Self Portrait boxed set flooring me as something I never imagined wanting much less loving and then The Waterboys boxed set for Fisherman Blues exploding my idea of that band, well, maybe I don't know best! :)

Dylan's bifurcated "Blood On The Tracks" sessions - different enough to almost be called two different albums, in a way, is getting fixed as of the Deluxe Edition coming out Nov 2 - can't wait!

Sticking with live material, The Who’s 1973 shows for Quadraphenia should be properly released ala the Stones Brussels Affair set
It’s clear the band has the tapes from the various complilations over the years from the original King Biscuit broadcasts.
It is Moons greatest moments. The bass player isn’t bad either.

Shriner,
I really do hope it's Wildlife. I love that record without irony, and the bonus tracks from that era are great.

I have a pretty good bootleg of "The Alternate Red Rose Speedway". I'm pretty sure the deluxe edition will contain, "Mamas Little Girl", as it was slated to be on the double album version.

I also have an "Alternative Blood On The Tracks". Apparently Bob was using alternate tunings on the first go round. As you know, Bob doesn't do a lot of takes, or rehearse, so the other musicians couldn't follow him by watching his hands, making for a slightly tentative feel. So he retuned his guitar to standard tuning and recorded it again, with mostly different musicians, leaving off "Up To Me", about his friend Richard Farina, who'd died in a motorcycle crash in 1966.


Apparently "More Blood, More tracks" is on the way.

Thanks for that, jef!

My wish is bands like Mikal Cronin, Kelley Stoltz and White Fence get more recognition. There are songs that without a stretch sound like Who Sells Out especially on White Fence's "For the Recently Found …)

Sign me up for that R&R Animal set as well. Such a great live album.

The Lou Reed disc would be a great reissue. I would like a definitive Nebraska with the unreleased tracks including the aborted E Street Band Sessions.

As I remember,seeing an old ad in Billboard before the R&R Animal was to be released it was scheduled to be a double album. Also if you listen in the fade out on "Sad Song" you can hear a member of the audience yell "Lou Reed Sucks" I swear, it's in the vinyl version

I got my longtime wish last year with the Dylan gospel set. Okay, how about rereleasing Prince's Black Album?

I don't know why it took me so long to think of:

A real release with all the bells and whistle of Lou Reed's Pickwick Years.

just accidentally discovered this blog.
Once I downloaded this album: "Rock 'n' Roll Animal+Live (2011 Remastered & Resequenced)".
Maybe this is what you guys are looking for?
If necessary you can check out for yourself: https://we.tl/t-kMy3Qph8Lt (link expires 2018-11-04)

Not my rip. So all thanks to the original uploader (that I unfortunately can't rememeber anymore).

Brussels Affair on an affordable physical format would be a wish come true. A Buster Poindexter live album would be great!