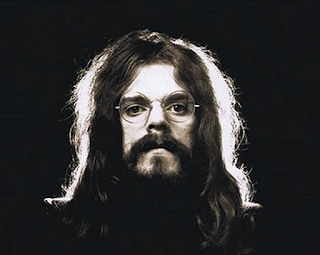 While Todd Rundgren was doing it all by himself in Philadelphia and New York, there was a madman doing the same thing plus bagpipes and cellos across the pond in Birmingham. His name is Roy Wood and he is responsible for at least three of my favorite albums of all time, and over two dozen more individual tracks that have remained in heavy rotation for over 40 years.

Today is Roy Wood's birthday, so in his honor, here is a Deep Cut Six Pack that represents a tiny fraction of what this man can do. Six songs is simply not enough, especially if you're a fan. If you are a casual listener of The Move or Wizzard, and these songs do anything at all for you, please say so, and I'll get right to work on Part Two.

For now, give this a spin:

All The Way Over The Hill is the opener from Roy's first solo album, "Boulders," and it is a prime example of what he does best. To sum it up in one word: more. With Roy Wood, there is always more. The perfect pop melody and arrangement just isn't enough for this track. In Roy's mind, it needed an Irish jig for a coda.

Don't Throw Stones At Me is an unreleased Roy original recorded for the BBC with The Move, and though there are countless others I could have included, this one is a recent discovery for me and I was excited about it.

Beautiful Daughter, from The Move's greatest achievement and one of my favorite records of all time, "Shazam," is quite simply, gorgeous.

Caroline is a 1969 UK hit from The Casuals, a British beat group whose most famous hit was "Jesamine." This track was written and produced by Roy Wood and might as well be Roy Wood through and through.

Keep Your Hands On The Wheel was the single from Roy's last solo record for Warner Brothers, "On The Road Again." It unmistakably features John Bonham on drums and Roy Wood on everything else. It's the Beach Boys meets Led Zeppelin, if you can believe it. This is the single edit because this time, it didn't need the Irish jig coda.

We close things out with the brillliant U.K. hit "Forever," Roy's nod to Brian Wilson and Neil Sedaka.

As I said, these six tracks barely scratch the surface of what this genius is capable of producing, and like my other musical hero, Todd Rundgren, not all of it works. But you can't blame the madmen for trying.

Enjoy, I hope. Feedback is welcome.

ZIP
Posted by Sal Nunziato at 5:26 AM

Excellent material! And of course, you can work on parts two, three and four. Like yourself, I've been a forever fan.

A friend turned me on to 'Shazam' around 1971 and I was hooked. The sheer audacity of 'Looking On' remains a favorite. 'Message From the Country' was a bit spotty, tho'. After splitting with Jeff Lynn, it sounded to me, out of the gate, that Wizzard would be just as successful as ELO, but alas, it was not to be. Jeff bet on a blueprint of the Beatles 'n' strings was a better way to go than Roy's concept of bigband rockabilly and jive with horns. Turns out, maybe Jeff was right. ;)

Anyway, where IS Roy these days? He certainly must have some home-cooked music he's been hoarding for us, waiting to be heard...

I dig it! Thanks Sal.

Love me some Roy Wood and have since I first heard Shazam when it came out. Roy is just plain brilliant. Keep it coming, please.

Roy Wood is the best. You gave us a great appetizer (thanks a lot!), could we have the main dish, please?

More often bonkers than not, but what a great songwriter & performer over the years especially, for me, with The Move (those classic early singles) and Wizzard (the barmy dress sense & THAT Xmas single). Thanks for the selection. Cheers!

Dunno what the policy is here about weblinks, so I'll just say that there are recent video performances of "See My Baby Jive" out there, some broadcast, some booted, all impressive. It's my fave Roy tune, so I keep my eyes peeled ...

I became a big fan of the Move from the harmonies on Shazam. I loved The Last Thing on My Mind. Also the Greatest Hits on United Artists which included some of their later singles including Do Ya. But yes that rockabilly was a wrong turn.

Feel free to post any Roy Wood you have, especially the rare stuff. I've been a big fan since "Message From The Country". I've always liked his eccentricities, no one else does what he does. Who else plays rock 'n roll oboe?? "I Wish I Could Be Christmas Every day" could have been a hit over here.

Roy's "Oh What A Shame" never fails to astound me - melodically, harmonically, conceptually. It distills the essence of the artist in an incredibly joyful three minutes and fifty-two seconds.