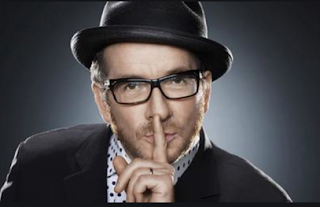 Putting this sixpack together wasn't as easy as I thought it would be. There were too many songs to choose from, and just as many that didn't feel deep enough. Elvis has a lot of fans, many of whom read this blog, so I doubt there will be any real surprises here. But who knows? I went with six tracks that I felt like hearing.

There are four covers, songs recorded by Christina Aguilera, Lee Dorsey, Paul Simon and one recorded by both Aretha Franklin and Dusty Springfield. The two EC originals are "Imperial Bedroom," a great song NOT found on the album of the same name, and "Basement Kiss," one of a dozen tunes written for Wendy James of Transvision Vamp and found on her excellent "Now Ain't The Time For Your Tears" LP.  Elvis' demos of those tracks were never officially released, though a few trickled out as b-sides.

Maybe this sixpack isn't quite as inspired as previous packs, but it's all I've got on a chilly Friday morning.

From the school of "Great Minds ..." I'm watching The Deuce on HBO. While I'm not sure what to make of the whole show I really dig the credits song for season two -- a remix of This Year's Girl as a boy / girl duet with Elvis' original vocals plus new from Natalie Bergman. Pretty cool!

Have a great weekend.

One of the finest songwriters of all time. A daunting task to pick just six.

"One of the finest songwriters of all time."

Yeah, and I managed to pick four covers.

Yeah. what's up with that/ I should've added "and interpreters." ;-)

Late to the party on this, but great choices Sal. I remember the shows from the Imperial Bedroom tour back in 82 and he ended the set proper with Imperial Bedroom.. And then returned and played another 30 minutes or so.

American Tune is another good one. Allen Toussaint's version brings a tear to my eye too.