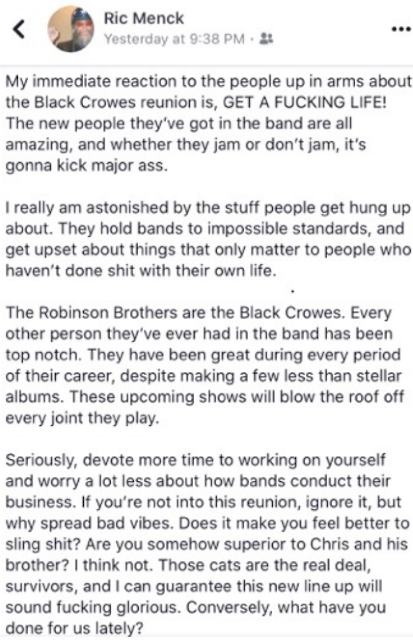 "Devote more time to working on yourself and worry a lot less about how bands conduct their business?"

So let me get this straight, Ric. This reunion tour of the Robinson Brothers, two guys who make Ray & Dave Davies look Jack & Bobby Kennedy playing touch on a Hyannis lawn, is really NOT about the fans? What you're saying to long time devotees of The Black Crowes who might seem a tad skeptical is, shut up? Take it or leave it? Trust the judgment of two people who are notorious for making bad judgments? Oh wait...am I not allowed to write about this until I take stock of my life?

One of the main reasons I have been a long time fan of The Black Crowes live performances was their drummer, Steve Gorman. That he will not be on this upcoming reunion may be of little to no interest at all to the throngs of people who will no doubt show up for these shows. (Two original members of a band is two more than most on their "Remember Us, We Are Going To Die Soon" Tours. Most don't care who is on stage.) But his absence, for me personally, is a big deterrent. Another small detail is, as much as I love the BC's debut, knowing ahead of time that the tour will be "Shake Your Money Maker" in its entirety with "all the hits," deflates that balloon of surprise that has always been a big part of a Black Crowes concert.

But, all that aside. Maybe Ric Menck is right. Maybe Chris & Rich Robinson have chosen some truly fine new Crowes. And maybe, about a half dozen shows into the tour, the band will decide to mix things up. Maybe the chemistry will be off the rails and this "reunion" will become something other than a way to make some extra bucks. Time will tell.

Last night's warm-up set at The Bowery Ballroon consisted of the entire debut played in order and an encore of the Stones' "It's Only Rock N Roll." That doesn't seem to be about the fans, if you ask me. Short set, the album. One encore. But, I wouldn't want to upset Ric Menck by getting "hung up" on all this. I mean, "What have I done for you lately?' (I may be wrong but, Ric's last Velvet Crush record was in 2004.)

I'll admit to being less than excited about this Black Crowes reunion tour. But I had no intention of writing about it until I saw Ric Menck's post, something I found far more offensive than what he was ranting about. Are the Robinsons crying already? Is that what this is all about?

Without the fans, Chris and Rich Robinson might be working in some Atlanta office. And if you think some backlash by a few fans who might not be on board at the moment will make this tour any less of a success, you're fooling yourself.

Sal, what you seem to be saying is, "You can't defeat hate with hate. Only love can do that." I think it was Soupy Sales who said that.

As for me, I initially thought the reunion was exciting news, and maybe more than just a cash grab. But then I saw that the Chicago area show is in the godawful LiveNation owned outdoor shed (Bruce played there once and called it “an ugly black box” and never went back) and I realized this is a very corporate ‘product’. I also saw that I could get $18 lawn seats for a Saturday night in August and figured there are worse & more expensive ways I could spend that evening, so I’ll probably grab some friends and go.

As for this Ric guy, if he doesn’t like the fanbase response, it’s his right to rant about it but it’s also my right to ignore the h*ll out of him. I had to laugh when he said “I am really astonished by the stuff people get hung up about” and then proceeds to get completely hung up about the response from the BC fans. Hmmm, pot kettle black anyone?

I’m much more interested in why you are - - or in this case aren’t - - excited about the news, and always know that you will explain your response clearly and thoughtfully (which of course, you already did).

I think the way this tour is being set up is wrong. Fine to celebrate the 30th anniversary of their debut album. But that album and "the hits"? After "Remedy" from their album, there weren't any hits.

And as Sal pointed out, one of the joys of attending a BC show was what they were going to play. Every night was a different set lit with their own music and covers. Not so this time around.

And finally; Live Nation. I don't hate them. But they guaranteed a bunch of money to the Brothers and now they need to recoup that. So let's put them in sheds that have absolutely no chance of selling out. And at tickets in the lower sections priced at $180 (not including beloved service charges)! Years ago, I saw them at the PNC with Tedeschi Trucks and London Souls. Great line up, right? Attendance was at like 50% and that was on a Friday night.

LN is going end up giving tickets to radio stations for them to give away all just to make money on parking and beer.

You know Kevin M, you make all the right points regarding the tour, but I am so used to concert tours being out of my comfort zone both financially and literally, comfort (bad venues, too far to travel, SRO, etc.) that all of those Live Nation points didn't bother me. Even the cash cow aspect was, to some degree, expected. I got all fired up over what a putz Ric Menck is. I disagree with EVERYTHING he said.

Oh and Kevin. I saw the BC and London Souls without TTB at Westbury and THAT was half full.

Well said, and agreed all the way. It's a Robinson brothers reunion, not a Crowes reunion. Provided the brothers don't revert to their individual self-absorbed ways, it will be a great show, likely because the other players know they're just there because they fit the suit and won't get in the way. How would Ric feel if Matthew Sweet did a Girlfriend reunion tour and didn't invite him? Or has he already?

We will be seeing Trigger Hippy (with Mr. Gorman) in a few hours and I have realized this best band to come out of Black Crowes is Trigger Hippy. I hope this doesn't offend Ric....

I agree totally. Although I REALLY wanted to get into that Troubador show last night. But I still have a bit of a sour taste about this tour. Besides Steve, I'm a big fan of Marc Ford and Sven. I love this BAND. And, after reading Steve's book it's even more clear that this is obviously about money for the Robinson brothers. On the other hand I love seeing those brothers perform, I love the first album, I'm excited at the chance go hear those songs live again. So I'll probably go. I just wish it was different.