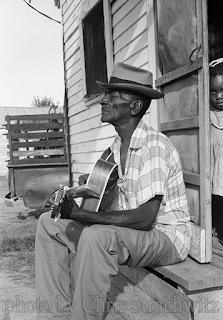 SOME NOTES:
The Fleetwood mac track "Drifting" had originally been left on the cutting room floor. It is arguably Peter Green's finest solo. (I said, "arguably.")

It is Mick Taylor on guitar with Mayall for "Vacation" and this is surely one of Mick's finest moments.

"Can't Hold Out Much Longer" is Ronnie Wood's favorite Little Walter track. I think I agree.

"So Many Roads, So Many Trains" is Jimmy Page's favorite Otis Rush track. No argument here.

"Rainin' In My Heart" by Slim Harpo is one of Keith Richards' favorite songs by anyone. It's definitely one of mine.

"By The Water" is my favorite Snooks Eaglin track and has always felt like a tour of the backwoods of New Orleans in under three minutes.

"Death Don't Have No Mercy" is a bonus track on the Grateful Dead's debut. This didn't make the cut of my friend's mix, but I'm including it here because Jerry Garcia's guitar on the solo never sounded so mean.

It was difficult for me to choose just one Savoy Brown cut. Those records with Chris Youlden are truly special, but I went with "Honey Bee" because the vibe is even specialler. (Specialler?)

I opened with Mance Lipscomb because I still think about Les Blank's documentary on Lipscomb. If you have never seen it, please do yourself a favor and track it down. I bet some of you might argue after seeing the film, that Lipscomb was one of the greatest guitarists who ever played the blues. He certainly blew me away and it was that documentary that made me a fan.

The rest...well....they are all personal faves for one reason or another and I think they sound good altogether.

You've got the blues right HERE.

Specialler. The chair allows it.

Thank you for this.

Like with last week's post this is music I only know in passing. Two really good reminders of my musical ignorance :-)

Nice comp! That song is also one of my favorites by Snooks.

I don't think I have listened to a blues album all year. There are some great great cuts on this mix like Otis Rush, Little Walter, Buddy Guy, Junior Wells to name a couple. I am going to throw a Muddy Waters track on there just for good measure.

Your recent jazz comp was so good, I have a feelin' this will be a great blues comp. Looking forward to it!

Listening now... this thing is smokin'!!!

There's really more variety within the ostensibly conservative/traditional form of the blues than I sometimes give it credit for... a lot of these songs sound almost nothing like the others in the mix, which is a cool thing.

Bloody excellent. Many thanks. Several new ones here (and several old faves).