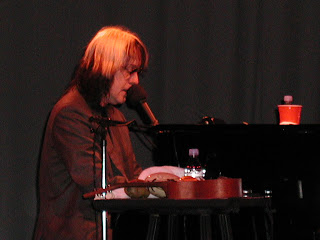 The Paul McCartney and Elvis Costello collaboration continues to get heavy airplay in my house, especially since those brilliant demos got an offical release on the deluxe "Flowers In The Dirt" set. Running a close second are the two "Live From Daryl's House" broadcasts that featured the two Philly giants, Todd Rundgren & Daryl Hall performing each other's material, as well as some choice covers. It's amazing how two artists can bring their A-game when they need to.

At some point this year, Todd Rundgren will release a sequel of sorts to "White Knight," his album of collaborations with the likes of Trent Reznor, Donald Fagen, & Joe Walsh, among others.  Some of the new collaborations include The Roots, Rivers Cuomo and yet another musical hero of mine, the great Neil Finn. Here is that Todd & Neil track, "Artist In Residence" which Rundgren previewed when he guest DJ'd a radio show whose name I can't recall, a few months back.

My goodness, what a great song! Barring the production, sounds straight from Something/Anything or Hermit. Looking forward to the release of this!!

This is great News WK was my favorite album of 18. Cant believe Todd found the time for new lp given how much he was on the road in 19. I alone saw him 3 times. I like what you shared. Thanks Sal

What a great song. Looking forward to this one.

A wonderful tune. I thought the last effort was mixed but there were some gems. I've heard this and a couple of other tunes from the new album and they sound very, very promising. No matter how much I bitch sometimes I always look forward to new music from Todd. There's always something amazing.

I too am a big fan of Daryl's House with Todd. They are two great singers. I love their version of Didn't I Blow Your Mind by the Delfonics. Todd just popped up on your For What It's Worth Spotify playlist. Great mix. Nobody by Larry Williams is crazy and a good song.

Have any of the Live From Daryl's House shows been released on a CD or audio format?

I'd buy every one if he released 'em!

I have a lot of favorites from that show, but this one is probably my all time. I've rewatched it a million times, partly to hear him and Diane Burch duet on "Day Dreaming" and hear Daryl talk about his conversations with Arif Mardin about it.