For The Record #3: Dusty In Memphis

I've had the pleasure (?) of purchasing at least a half dozen versions of "Dusty In Memphis." For years, the original US Monarch pressing was the way to go. Then of course, I needed the remaster on CD which featured MONO bonus tracks of the album. In 2017, Rhino released a stellar sounding vinyl edition as part of their "Summer Of Love-1967" series. But then I fell hook, line and sinker for the 2019 Abbey Road half-speed master from the U.K.. I was completely satisfied with that version...until Run Out Groove's just released two-LP version.

I promise, this new edition is the way to go!

The album proper sounds superb. It's a clean pressing, quiet and full of body. Truly the best stereo LP I've heard. The bonus tracks are all over the place, running from good to excellent. They include tracks recorded around the time of "Dusty In Memphis," tracks recorded with Tom Dowd but left off of the follow-up "A Brand New Me," and tracks recorded with Jeff Barry, including a version of "You've Got A Friend," which came before James Taylor's but stayed unreleased until after he got the hit. Many surfaced as singles and as b-sides, but they all fall together nicely on LP #2.

This edition looks and sounds great with a wealth of liner notes. If you're a fan of this record, this is the version you need. 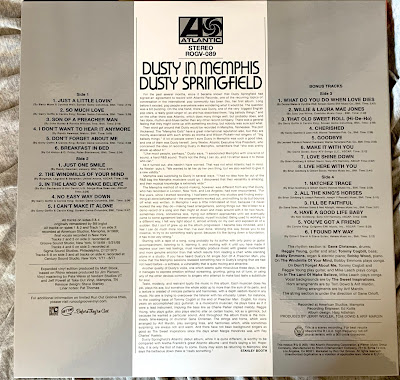 What timing. I was looking for a better version of the record than I have. Thanks for the review Couldn't;t have come at abetter time.

With cassettes, 8 track, LPs, cds, remastered cds, box sets and SACDs, my most often bought record has got to be The Band's brown album.

Todd Rundgren records have got to be my most expensive purchases since I have purchased many of his remastered cds from Japan.

A little off topic, but that was what I thought about when reading Sal's post. joe

Thanks for the heads up Sal. I too bought the rhino cd upon release and picked up the Summer of 67 series but did not know about Abbey Road issue and this new one. Looking for it now.
cheers and stay well

Good lookin' out Sal! Gonna get this version of a great record.