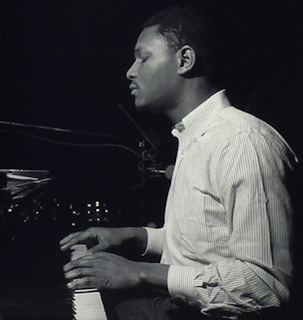 On Monday, I was talking to a friend about years of seeing of live music. We traded stories and performances, best and worst concerts and experiences, etcetera. I was reminded of one particularly awful weekend in the late 90's, training it up to Vermont to spend the weekend at my in-laws. I felt a cold coming on and I wasn't my best, but I didn't want to cancel because on that Saturday, we had tickets to a solo performance by McCoy Tyner at the Van Dyck in Schenectady. I had never seen him live in any capacity and let's face it, he was a giant. By Saturday morning, my throat was just about closed, as if a baseball had been lodged there. And I had the chills. Saturday night, I pressed on and drank a bunch of whiskey, hoping for the best. McCoy Tyner gave a masterful performance to a handful of people. Sunday morning we took a train home, where I shivered and ached for the entire ride. But I crossed McCoy Tyner off my bucklet list. I spent the next week in bed with one of the worst flus I ever had.

On Thursday morning, I thought about this conservation with my friend, and the first thing I wanted to listen to was Tyner's "Tender Moments" record on Blue Note. So I did. "Man From Tanganyika" is a favorite. I realized I did not own physical copies of either "Tender Moments" or Coltrane's "Live At Birdland," a record where Tyner really shines. I purchased both, the former from a record dealer friend and the latter, a cheap reissue, from Amazon.

I'm sure his passing would have affected me somehow anyway. He was a titan in the jazz world, and helped create some of the genre's most inspiring and influential music of our time. But in light of Monday's conversation and this week's mini-binge, this felt just a bit more personal.

Listen to some McCoy Tyner. Both "The Real McCoy" and "Tender Moments" are faves, and Coltrane's "Live At Birdland," especially the opener, "Afro Blue," is essential.

Saw McCoy many times back in the 70s. During the last occasion (sit-down concert hall) the vibe seemed a little tired at first. About half-way through, Mr. Tyner performed an extended solo cadenza, the overtone rows filled the hall, and suddenly the sound of a tenor saxophone appeared in the cascade of notes and chords. Jaws dropped, including those of the 2 tenor men on stage, neither of whom had their horns anywhere near there mouths. One of those magical moments, echoes of a friend, indeed. RIP.

When you say Tender Mercies" do you mean McCoy Tyner - "Tender Moments" 1967?

A titan of a musician. I saw him play several times and Atlantis was continually being played on my turntable during the 70's.
RIP Mr. McCoy.