A Few More Words on "Letter To You" 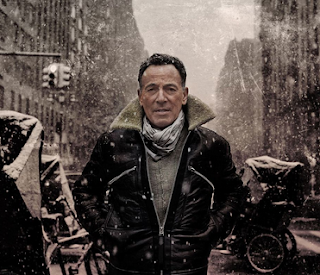 I've read more reviews of "Letter To You" over the last week than the amount of times I replayed Bruce Springsteen's new record. Every review is the same. They are all raves. They all mention loss, mortality and death. I don't disagree with any of them, and I am not about to throw my hat into the ring regarding the lyrical content. What I want to do is point out the importance of the music, the sound and the production, details that are so often absent from record reviews.

I wonder if the exact lyrics of "Ghosts" were sung word for word, melody for melody over the brutal twin guitar attack of Judas Priest with a double-bass kicking out 16th notes if the same people would get just as emotional as they did listening to the E Street Band. We could talk about lyrics all day long, but I'd bet dollars to donuts, if every song on "Letters To You" was covered in a reggae style or electronica, no Bruce fan would give a crap. That's because you need the glockenspiels, the saxes, the false endings, the Max fills, Steven's harmonies, The Boss's growl and the "ya ya yas!"

But even The Boss makes mistakes.

Take "Real World," a fantastic song when you hear it played solo from the 1990 Christic Benefit, but godawful all dolled up on 1992's mediocre "Human Touch." Same lyrics, bad arrangement.

I personally know people who don't really like "Dancing In The Dark," the synth-heavy monster MTV hit. But they changed their minds once they heard the solo acoustic version from the 1986 Bridge Benefit. Suddenly, lines like "You sit around getting older, there's a joke here somewhere and it's on me, I'll shake this world off my shoulders, come on baby, the laugh's on me" hit home a lot harder when not being sung by a guy in a sleeveless t-shirt dancing like an idiot at your cousin's wedding.

"Letters To You" is indeed personal. It packs an emotional wallop, more so now, as we all sit around getting older, wondering if we are ever gonna get outta this place alive! But "Wrecking Ball" packed an emotional wallop, too, especially for those suffering through hard times. I'm thinking some Bruce lifers dismissed it because it sounded more like The Pogues at times than "Kitty's Back." The words were there, and so was the recordmaking.

I can't speak for you, but I'd probably get less emotional if it wasn't for those four extra "hard times come and hard times gos."

I don't know if I'd love "Letters To You" as much as I do if it was released before the pandemic, or if Bruce recorded it with just Patti. The timing is perfect. Maybe...hopefully...we will get to hear these songs live, both as full on E Street arrangements and solo acoustic. Let's see how they drive. I do love "Letters To You," but I'm not sure it's a better album than "Magic" or "Wrecking Ball." I just know it sounds more like what we want to hear from Bruce Springsteen than "Magic" or "Wrecking Ball" did. And there's absolutely nothing wrong with that. Definitely not this year.

Completely agree. Especially with your comments on Wrecking Ball. That song tears me up every single time I hear it.

I'm still wrapping my head around this one. I doubt I will ever like it as much as Wrecking Ball - which I adore. I loved the Pogues like songs. But this one sounds like Bruce. And Modern-ish Bob.

I tend to agree. I've only had a few days to sit with "Letter", but I think that the songs on "Wrecking Ball" are just as strong as these are. Overall, I think the songs on Wrecking Ball are actually stronger. But this record SOUNDS like the E Street Band and that's the difference.

This record is an emotional visit from an old friend. But I wish he had more time with some of the songs. "House of 1000 Guitars" doesn't do much for me. I prefer Willie Nile's song by the same name and I kinda think it's weird that Springsteen nicked the title. I'm not terribly impressed by "The Power of Prayer" at this point either. But I can see how that might grow on me.

I have a friend who hasn't listened to the record yet because the raves were annoying her. It feels like people are excited by the return of the E Street Band and the PROCESS of recording that they'e not judging this record on its merits. I totally get where she's coming from.

I'm in love with Letter as a whole, like Chris already said: "House of 1000 Guitars" is lukewarmly so-so.. But all the ingredients are at their right place (and quantity)... Good proved Recipe (Carbonara-Rock?)

It's SO much easier to discuss lyrics in a review. Words! You can quote them, paraphrase them, point out all the subtext and references. But music? That's a pain in the ass and SO much harder to describe. No wonder critics lean on the words, but they're lazy bastards anyway.

I thought it was well accepted by Bruce-ians that Wrecking Ball is a tremendous album! Stands alongside the Seeger Sessions as one of his peaks in the last 20 years. Waiting to listen to Letters To You when I'll be in the car driving uninterrupted for about 75 min. What better way to experience it first?

Michael Giltz,
Let's not forget, you can write a review without having to actually listen to the music by pulling out lyrics and scanning a press release. Hugh Wyatt, famous health affairs reporter turned music journalist made a practice of this, once referring to the band Talk Talk as "Another World" and their great new single "Talk Talk" simply because he read the hype sticker wrong.

Friday on my first listen, I found myself with tears of joy running down my cheeks as I'm driving to work listening to the whopper combination of Burnin' Train into Janey Needs A Shooter. Just tremendous E Street sound, great production, and like a shot of B-12 in a year where bad news never ends. His fire and intensity are so inspiring and so needed right now. The album is far from perfect, there are some paint by numbers E Street songs, and House of 1000 Guitars needed to be totally redone. He repeats some themes pretty often these days, and I don't know what would make him resurrect Song for Orphans in 2020. It doesn't matter, it stands up and will stand up as a really solid album in the cannon, and especially at this stage of their career. It's sobering to watch them in the documentary toasting to touring and looking forward to playing Italy. It feels like a long time ago when that was possible. I'm just so grateful for his obsession with rock and roll, and for the group effort it took to pull this off.

I also never appreciated the lyrics to Dancing In The Dark until I heard Jon Fratelli do a solo acoustic version. Or did you alter that particular little anecdote to protect the not-innocent ( and the E-street shuffle ).

This is the first time in over 30 years that I've read the word 'catholic' used by it's non-religious definition.

"This is the first time in over 30 years that I've read the word 'catholic' used by it's non-religious definition."

There's something for everybody here on Burning Wood!

@Tumbling Dice
Bryan,
"Whopper combination of Burnin' Train into Janey.." Indeed! I think this record might have been close to perfect if there had been a few cuts. I know, I know, we are all editors and who's to say what I'd cut wouldn't be someone else's favorite song. But I will toss my two cents in and agree about "House Of A Thousand Guitars." It's very clumsy and just feels out of sorts. I also feel like "Song For Orphans" feels like it's on the wrong album. Knock those two out and you've got a pretty powerful single album, clocking in at a little over 45 minutes.

I think context is everything. We needed the E Street band this year and we needed them to be great this year and they are.
What makes this album stand out for me is that it echoes the glory days, without ever becoming a parody of the glory days.
It reminded us of when we were young listening to Bruce and the boys when they were young. The emotional thread that runs through it connects us to our past while bringing us joy in the present where joy is in short supply.
It will always be a reminder in the future, that our musical heroes reached out to us, when we needed to hear from them.
Along with Dylan and the Stones.

yes indeed and being a music first kinda guy I couldn't agree more. Particularly the three older tunes which give you an idea of what Greetings would have sounded like if the E Street band recorded it (not an original thought). Although I still like the Zevon live version of Janey because of the music.

I'm afraid I'm gonna be the turd in this punchbowl -- I've read all the raves, and I'm not hearing it. My review should be up on Friday, but suffice it to say that I equate the acclaim this album is getting to those that greeted "Eqypt Station" as the best McCartney since "Band On The Run". And I fully expect the wrath I'll get from such a stance.

Well there’s one in every crowd. But also Egypt Station really wasn’t the best since Band On The Run, whereas Letter To You really is a great record. This is the nature of rock criticism. Bruce solo record? Crap. Bruce Seeger Band? Crap. Bruce Laurel Canyon record? Crap. Bruce returns to the ESB? Crap. It’s boring.

I see I've touched a nerve. I'm spending more time with the album so I can be more precise. For the record, I liked both the Seeger album and Western Stars. The blog delineates my history with the man, and I've tried to be fair.

I look forward to your review, Wardo. Post a link when it's ready. And for the record, you call "Wrecking Ball" a "lesser album." That's tough to handle.

Here it is. I'm still in the minority.