For The Record #6: Forever Changes In MONO 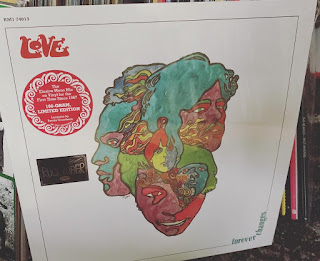 It's Robert Plant's favorite album of all time. I have some friends who feel the same way. I also have some friends who think it's one of the most overrated records of the 60's. Personally, I think "Forever Changes" falls somewhere in between, though much closer to the top than the bottom. I can think of a hundred records I love more, but Arthur Lee and Love's 1967 classic deserves all the accolades. There really is nothing like it.

Now, courtesy of Rhino Records "Rocktober" series, the elusive mono mix is available on vinyl for the first time since its initial release and it is a stunner.

This record has seen more represses than a pair of Chris Christie's pants. There have been ten, in various sizes and formats--CDs, double LPs at 45RPM, SACD---since 2000 alone. But now, a gorgeous mono pressing cut by the always reliable Bernie Grundman, is within reach.

I'd be lying if I told you I recognized the many differences between the mono and the stereo. Unlike The Beatles or Stones catalogue, or the many soul records from Stax and Atlantic, I don't know "Forever Changes" inside and out, so an immediate "Oh wow, Paul's voice is way up front on the chorus of 'I'm So Tired'" type thing...can't happen. As I said earlier, I love this record, but it's never gotten heavy rotation like so many of my favorites.

The one thing I can say unequivocally, is that this new pressing is one of cleanest sounding records I have heard, without ever sounding sterile or cold. Truth be told, it was the first time I really felt like I heard "Forever Changes." My reaction to the horns and strings was immediate, as if they had suddenly appeared after being buried for so long. Acousic guitars ring out beautifully. It feels more like a psychedelic folk record than a rock record. Does all this have something to do with the pressing or the mix? I might need to ask Robert Plant or a few of my friends for the answer. Until then, I will go on record and say, I have never enjoyed "Forever Changes" as much as I did while listening to this new edition.

I will tell you this, if you love this album you will love this pressing. If you own the 4 CD boxed set with all the extras, including the mono mix, than maybe this isn't for you, though I'd love a comparison.

LOVE this record soooo much!

it is a perfect record, however, I warn you that if you play "Red Telephone" in a car full of punks and posers on your way to a concert, said punks and posers will be derisive towards your musical choices.