The Jaded Hearts Club: A Record With Oompf

I had 22 favorite records in 2019. Four of them were covers records. Who doesn't love a good cover? I guess the elements of a good cover are debatable. Something note perfect and faithful is an accomplishment, though some might think, "What's the point?" The other direction, a complete reinvention can be just as exciting. But if it loses the heart and soul of the original, I ask again, "What's the point?" Write your own song. I've been thinking about a "Ten Best Cover Albums" post for some time, and this new one from The Jaded Hearts Club will surely be included.

Few records kick ass like "You've Always Been Here," the new release from this sorta supergroup. You might recall seeing and hearing their version of The Four Tops' "Reach Out, I'll Be There" on these pages a while back. That version came at the right time. I know I sure needed that shot in the arm during what has been one bleak year. Now, the rest of "You've Always Been Here" is ready to eat with more of the same. It's big and hard, fast and in your face with covers of some deep soul cuts and some rock and roll favorites, and nary a clinker in the lot.

Matt, Graham, Nic, Miles and Sean from Muse, Blur, Jet, The Last Shadow Puppets and The Zutons respectively, plow their way through ten cuts by the likes of Marvin Gaye, The Isley Brothers, Chris Clark, The Human Beinz and The Sonics, among others. It's a relentless assault and yet somehow oozes with soul. Both Miles Kane and Nic Cester trade lead vocals, and both possess some real pipes. The arrangements are made to rock, with a juiced-up bass guitar leading the way most of the time. Even the songs you think you'd never want to hear covered again--"Money," "I Put A Spell On You" and "Nobody But You"-- offer a thrilling diversion from the deeper cuts, like Motown one shot Chris Clark's "Love Gone Bad" and an Isley Brothers single from their short life at Motown, "Why When The Love Is Gone," two of the best tracks on the record. 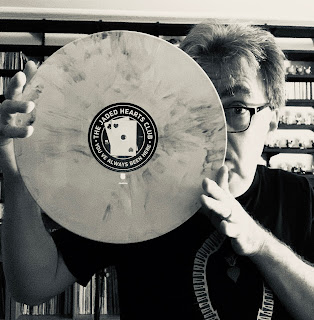 Yes, I'm gushing. But that's because The Jaded Hearts Club did everything right. You can hear how much these guys love these songs in every snare hit and squeal. You can recognize the songs, at least those you recognized before hand, and yet each feels brand new, souped up for maximum pleasure. Every record should be this much fun, though I don't think my heart could stand it. Might have to break it up with a little Nick Drake to bring me back down to Earth.

P.S. A gold star for the first person to get my reference in the post title.

I love this record. Pretty sure I first learned of it from a certain timber fire blog.

This record DOES kick ass! Lovin’ it!

Most cover albums that I can think of are more like tribute albums, dedicated to a single artist... Waits and Jackson Browne and the Steve Earle ones on Townes and Guy Clark spring to mind immediately. So Id be interested in your list!

I always have enjoyed the Matthew Sweet/Suzanna Hoffs cover albums (probably the first more than the second). Bell Bottom Blues!!

Stay Awake, the Disney tribute album, would be on my short list. But a single artist doing covers of another? I assume your list will include Bowie? Ferry? Hmm.... I'll have to think.

First, jazz is filled with tribute albums of course. Ella made her bones on them. But the one that springs to mind is Carmen Sings Monk, which is as typically strong as all her albums, my introduction to Carmen McRae and rekindled my love for Thelonius.

Driving to my outdoor home-away-from-home at Panera (a table outside looking on a public square, a la Paris but with far less atmosphere, accordion music and chic -- I thought of a few more. I dug the Billie Joe Armstrong/Norah Jones duet album on the Everly Brothers but need to listen to it more.

And of course Nilsson Sings Newman, that alternative universe where Randy Newman songs are performed by one of the great voices in pop music instead of one of the crankiest great voices in popular music. It's the difference between a movie star (Nilsson) and a tremendous character actor (Newman). What a great pairing.

But the head-slapping moment for me was remembering Jennifer Warnes' Famous Blue Raincoat, one of my favorite albums of all time. A marvelous session and backup singer tackles a labor of love and produces her masterpiece while shining a light on Leonard Cohen's songwriting and proving a key moment in launching his second act. Now THAT'S how tribute albums are supposed to work. It was my first time listening to the songs of Cohen (via the Rolling Stone rave for Warnes back when raves and Rolling Stone meant something) and as soon as I heard it gobbled up more, beginning a decades-long romance with the man and his music. Warnes never matched that moment artistically again, but what a moment!

I think I need to get this one.

Oh and one of my favorite albums of 2020 is Rumer's Nashville Tears: The Songs Of Hugh Prestwood.