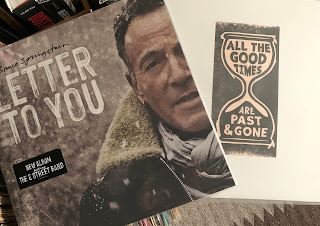 The Bruce record is on the Columbia label, housed in a thick gatefold jacket with what feels like fancy rice paper inner sleeves and includes a booklet of photos and lyrics.

The Gillian and David record was recorded at home and the jackets were hand made, with title cards glued to a plain white cover.

The Bruce LPs are covered in marks, nothing feelable, but still an eyesore. The inner sleeves don't fit properly into the cover. The vinyl, for the most part, plays clean, but there is some light noise on the intro of "If I Was The Priest" and there is inner diameter distortion at the end of "Rainmaker."

The Gillian & David record is one of the cleanest and most beautiful sounding records I have heard in ages.

Both records cost exactly the same.

Where is the quality control?

The cost of new vinyl by a major artist averages around $20 for a single LP and around $30 for a double LP, and more often than not, the pressings are inferior. Records come out of the shrink wrap covered in sleeve marks, occasionally with specks of dirt. They don't play clean. What gives?

All the bells and whistles--the colors, the weight, the etchings--don't mean shit to your old school vinyl lover. A record used to be a slab of vinyl in a sleeve and those records survived wars and still sound great. Now, places like Vinyl Me, Please charge $45 for a $10 Al Green record just because it's housed in a "tip-on style" jacket, which is code for, "too tight to remove the LP with ease."

The new Gillian Welch & David Rawlings is a standard weight piece of vinyl, with a white label featuring a tracklist, and a plain white jacket with two pieces of oaktag glued to the front and back, respectively. The fidelity is stunning, not a snap, crackle or pop. Clean as a whistle. If they can do this in their living room, so can every one else, especially Columbia Records.

One last point regarding "Letters To You." The album runs appoximately 60 minutes. Why waste a side of vinyl for a useless etching? How much better would the record have sounded having four 15+ minute sides instead of three 20+ minute sides?

Back in the 70s and 80s when I was buying a couple of records a week, I always held my breath during the first spin, waiting for the pops and crackle to emerge. I remember those paper thin records (I think they were dynaflex). I never had much luck with them and would return a good portion of what I purchased.

Now with the brick and mortar stores quite scarce, I rely on online stores. It certainly not as easy to return new records with some distortion as it was back in the day when I just jumped in the car and drove 5 miles to my favorite store.

Sal, that is why I like your Discogs store. I know exactly what I am getting with no unpleasant surprises. Post pandemic, I hope to get back into the very few places that sell vinyl in my area. joe

I remember the disparity of vinyl in the 1970s and the quality varied from one record company to another. The RCA releases (specifically KINKS) were so thin and flimsy. My copy of Every Picture Tells A Story (on Mercury Rec.) was so thin you could almost fold it into a shoe horn. I recall my MCA l.p.s being super thick & heavy. Go figure.

Yes! I do remember having a lot of trouble with my Kinks records!!

I agree the vinyl doesn’t look great. Pretty clean sound though. I have some clocks toward the end of Priest but mostly ok other than that. I too wish they’d spend more time on the vinyl as opposed to the extra fancy (though very nice) packaging.

I have a lot of vinyl, old stuff I've had half my life, and newer vinyl released within the past 5 years or so. But I'm not well versed in why certain platters sound better than others. But what I can't stand is the super thick vinyl (supposed to sound better I guess) where you get 1-3 songs per side. Why can't we have good sounding vinyl where a 45-50 minute album fits on one disc, 5 songs per side? It drives me nuts to have to flip an album over after 8 minutes.
Signed, grumpy old man Troy