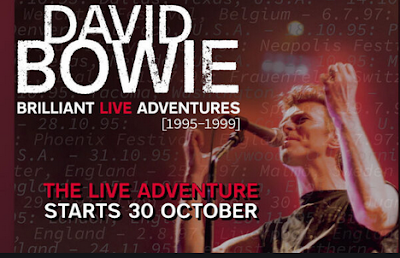 Since David Bowie's death, his camp has not stopped working.  It seems like there is a new vault release every three months, whether it's Tony Visconti remixing older albums, like "Space Oddity" or the just released "Metrobolist," a 2020 fixer-upper of "The Man Who Sold The World" with its original title and cover art, or live recordings from throughout Bowie's career.
Slated for release in 2021, will be the fifth boxed set, continuing chronologically with his catalogue proper. I'm looking forward to this one because, even though some of the material was uneven, it will cover some long out of print records that will be available on vinyl for the first time since their initial releases, and will include long, overlooked gems like "Black Tie, White Noise," "The Buddha Of Suburbia," "Earthling" and "Hours." But until then, something else has just begun. 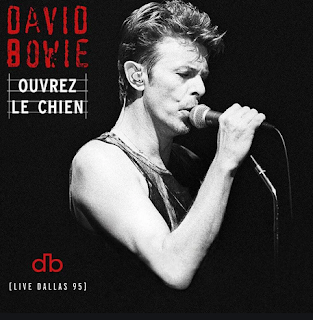 The first of six upcoming live albums has just been released through Bowie's website. These sets will comprise the "Brilliant Live Adventures" boxed set. "Ouvrez Le Chien"  is from Dallas recorded on the "Outside" tour with Nine Inch Nails in 1995. "Outside" was not a great record, but the tour on the other hand, was insanely good, with nasty, industrialized reworkings of some Bowie classics. Even the tracks from "Outside" come alive here, with more room to breathe in a live setting.

Nine Inch Nails opened the show to a jam-packed Madison Square Garden, and they tore the joint up. That building was rocking from side to side!  But, as the transition was made from NIN's band to Bowie's band---a few members off and a few on---so was the transition of the crowd, from their seats to the exits. Bowie played to a 3/4 full MSG, if that. This is something I still can't wrap my head around. But the truth is, Bowie just wasn't as popular as NIN in 1995.

This live set is fantastic. The performance cooks and the audio quality is near perfect. The second title in the series is to be announced any day now.

I know I've complained in the past about the relentless reissuing and repackaging of an artist's material. I can't say I'm too thrilled with the "colorizing" of "The Man Who Sold The World." But David Bowie has always made the most of his live performances, offering varying setlists, as well as unique arrangements of both favorites and deep cuts. Let's hope those behind this project choose the right shows for inclusion. "Ouvrez Le Chien, Live Dallas 95" is a great way to begin.

People came to see NIN and david Bowie. Bowie's band included guys in NIN. And people left? That's bizarre. How can you have any love of music and not watch the Bowie set? Esp when artists you apparently like more love him and are performing with him? At that stage in Bowie's career -- Elder Statesman, at least -- that's just obnoxious. I remember U2 opening up for some act they should never have been paired with and hearing a good half of the audience left after their set. I felt bad for the band but it made sense. (It was like Flock Of Seagulls, I venture to say.) But Bowie?? That's just wrong.

Actually Michael, Bowie's band didn't include members of NIN. It worked like this- NIN did most of their set, then they did Bowie's "Subterraneans," then some of Bowie's band came out and did "Scary Monsters" with NIN, as well as NIN's "Reptile." Then, the rest of Bowie's band came out and the rest of NIN got off excpt Trent, and that lineup did NINI's "Reptile" and Bowie's "Hallo Spaceboy" and then when all of NIN was off and all of Bowie's was on, Bowie opened with NIN's "Hurt" and continued with his own set.

That's how I recall it, but it's been awhile.

The next on the list has just been announced as "No Trendy Réchauffé (Live Birmingham '95)", offering Jump, They Say, Strangers when we meet and 2 versions of Hallo Spaceboy amongst others.

More Bowie always welcome. Always. The Dallas set went down real bonzer (as an Antipodean acquaintance is wont to say) & I have high hopes for the next one. Admit had to look up what Réchauffé meant & now ready to drop it casually in conversation. Great details on that Bowie/NIN gig. Bonzer....er... cheers!