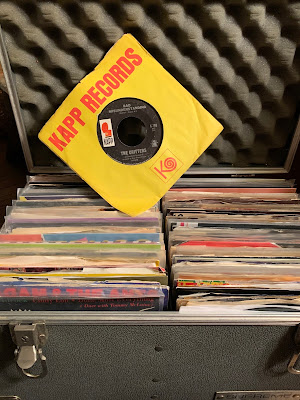 This quick mix created itself.

I sold a 45. Couldn't find it. Thought maybe it was in my own personal stash. Went looking. Saw The Critters single. Felt like hearing it. Spent 45 minutes playing 45s. Forgot why I came. Decided what I played sounded good...like a Weekend Mix should.

That Critters single, "Bad Misunderstanding" only got as high as #55, but what a record. I just love how it unfolds.

When I listen to The Brains, I always go for the superior original indie single mix.

"Reveal Love" ended up on a Ken Stringfellow solo outing away from The Posies, but the original, and again superior version, is the single mix he released under the moniker Saltine.

We have two Roy Wood songs and productions in a row, "Caroline" by The Casuals and "Farewell" by Ayshea. If you love Roy/The Move/Wizzard, you will love this one-two punch.

Deep Purple made one album with Tommy Bolin and this single is the best track from it...I think.
(CORRECTION: This track is from "Burn," not "Come Taste The Band." I mixed it up with "Getting Tighter," a similar, funky track. Sorry.)

Ollie & The Nightingales was an act on Stax. "Don't Let A Good Thing Go" was a song I used to play with The Cool Jerks way back when. It is a b-side without Ollie and I have always loved it. Special thanks to Brother Jerk Peter for the MP3.

A few years before disco hits "Boogie Fever" and "Hot Line," Foster Sylvers released "Misdemeanor" on his own. Another special record that is not so far removed from what Hall & Oates would do a few years later. I bought this single in 1973 from a vending machine in Flatbush.

I don't ever pass up a chance to hear "Mixed-Up Shook Up Girl" by Patty & The Emblems, one of my favorite records of all time. It's like scrolling through the TV guide and seeing "The Godfather." Gotta stop what I'm doing and just watch it...or in this case, listen.

Nick Lowe covers Barry Gibb, a marriage made in...well...somewhere. I love it.

And here it is. It made itself and guess what? It sounds good altogether.

Stringfellow, Bolin, and Lowe were enticement enough, but the others are new to me, so worth checking out. Thanks again for the zip!

A stellar selection. I’m with you on “Mixed-Up, Shook Up Girl” plus, not one but two, Roy Wood entries. Nick Lowe is icing on the cake. I also loved the Deep Purple/Tommy Bolin outing.

i'd forgotten that Bolin was in Deep Purple, so I had to peek. apparently he took the job because he was out of a gig, hated it, was treated badly by the other band members, lost his girlfriend to the bassist, and his drug use became debilitating while in the band. that guy could not catch a break.

Great mix! All stuff we love to hear. And frankly, my attention span is measurable.

A few hours getting lost in playing 45s is always a good thing!

Entertaining mix, many thanks. Had such a crush back yonder on actress,TV presenter Ayshea, though not so much on her singles. The Casuals single has always been a fave & the Purple track was quite a funking departure back in the day (good, though, chief). Cheers!

A vending machine that dispenses 45s? Who knew? I went to look up a picture of one but can't paste it into here. What did it look like?