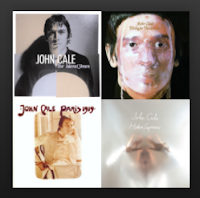 There is arguably no band as polarizing as the Velvet Underground. People get real ugly, especially around Rock & Roll Hall Of Fame time, when discussing the merits of Lou Reed and company. But I am not here to discuss the VU. This is about brilliant VU member John Cale.

I have loved Cale's solo work from the first time I heard "Paris 1919," one of the greatest records of all time. I've recently been on a light Cale binge and it occurred to me that any one of his releases would make a great subject for a "Trying Your Patience" post. But, it is also because any one of his records would work, that I chose to create a mix instead. It is the weekend after all, and I couldn't decide on which album to try your patience.

As I mentioned in the last "One Sentence Review," Cale can be a number of things.

Vicious. Romantic. Melodic. Creepy. Sometimes, he is all of those things in one song and those songs are usually the ones that I love most.

This mix is mostly from a very distinct ten year period, 1970-1980, with the exception of a few post 80's tracks.  I deliberately stayed away from his classical work, his live albums, his collaborations, his spoken word and his avant-garde records. There are moments of brilliance to be found on all of those records, but if you're unfamiliar with his solo work, I thought keeping it commercial...commercial for Cale, that is... might be the best way to enter into his world.

I created a Spotify playlist as well, which differs slightly due to the absence of a few songs.

I do hope you give the mix a spin. I love this stuff as much as I love any of the usual stuff I gush over.

Spinning the mix now.
Thanks for getting me on a John Cale binge.

Helen of Troy.
Mercenaries (Ready for War).
Hedda Gabler.
His covers of "Heartbreak Hotel" and "Pablo Picasso"
Fear Is a Man's Best Friend.

So many greats, your list could easily be twice as long.

Nice to see Cale get some recognition, I saw him a number of times in small clubs in New York during the Sabotage and post-Sabotage era. He was never less than fantastic.

Glad I'm not the only one who tends to prefer Cale solo overall to Lou (whom I do love, I just find the former more consistent). This is wonderful listen before I dive into my endless Christmas music hole ;) Thank you.

Stay safe and healthy everyone.

Looking forward to it. Two of my favorite shows ever were solo Cale shows in Atlanta on the tours he did with just him and a piano, early 90s.

Perfect timing for a Cale mix. Thanks.

Paris 1919 is a great album. I like mixing it in with Velvet Underground 3rd. I think they go well together

Great mix Sal. Even though you're just skimming the surface. More later, perhaps.
I was the one who gave you my Cale records some years back. At least Paris 1919. I still have a few I kept I think.
Quick question for you or any reader... I have Paris 1919 on CD, some reissued version with alternative takes. I think it's Reprise/Warner. Problem is the audio quality sucks. I cannot get it loud enough to my liking. Do you or anyone know of a superior release or edition? Anyone else experience this? May be my all time favorite and would like to have the best version of it.
thanks

Great choice, Sal. I've been his fan since VU and first solo album. I might add 'Amsterdam' and 'A Child's Christmas In Wales'. JC is underappreciated.

That's a weekend mix I came close to making. Thanks!

Thanks Sal. The Spotify playlist option is most welcome for ease of access, though I know how frustrating it is to find things missing. Oh internet!

Has anyone heard Billy Bragg's cover of Fear Is A Man's Best Friend. O\v always been fond of it.

No doubt some will correct me, but isn't Cale kind of responsible for the unquote of Hallelujah on talent shows. IIRC, it was a largely forgotten Cohen song till Cale did his, magnificent, version for a tribute album, stripping it down to basics, which was surely the inspiration for Buckley's version and retooled the song for every singer who wanted to get noticed for a couple of years.

@Honest Ed,
A friend and I had an offline discussion about just what you mentioned regarding Hallelujah. He asked why I didn't include it on the mix and brought up the very points you made about Cale being the first and inspiring Jeff Buckley's version.

I made a joke once-- "Every 29 seconds, a child goes hungry. Every 49 seconds, someone covers Hallelujah."

Cale's version is stellar, as is Buckley's. But the song has been ruined for me. I can no longer hear it by anyone, thanks to the relentless covers since.

I have that tribute album somewhere. It also had REM's version of First We Take Manhattan and a really sweet cover of Bird On A Wire by the Lilac Time. I must dig it out. Apologies for the typos in my previous post.

And I promise I'm not your friend (that reads ambiguously, but you know what I mean!)