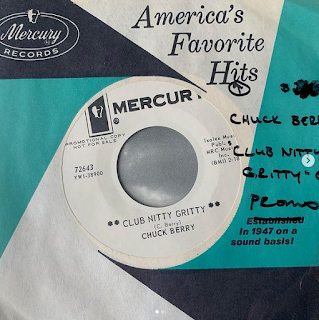 It's wouldn't be wrong to say that Chuck Berry had a bit of a lull on the charts once the 60's began. Between 1955 and 1960, Berry had twenty songs on the Billboard charts. Between 1960 and 1972, more than twice the time, Berry only had ten songs reach the charts. Though, he did finally get his only #1 with the godawful "My Ding-a-Ling."

In 1966, Chuck Berry left Chess Records for Mercury Records where he recorded five albums, including a live record and a not bad attempt at blues and psychedelia, "Concerto In B Goode." Those records are largely forgotten as is his first single for Mercury, "Club Nitty Gritty," released in 1966.

"Club Nitty Gritty" did not chart. I was obsessed with this track for years. The 45 was an elusive piece of wax, selling anywhere from $40-$100. You could find it as a "new bonus track" on the "Chuck Berry's Greatest Hits" record on Mercury. That's a $5 record everywhere you go, but that's because the songs were all rerecorded and most copies were electronically reprocessed for stereo. So, it's basically crap and not even worth the $5...except for "Club Nitty Gritty."

I finally snagged an original copy of the single just this week. It was in fantastic shape and it was reasonably priced. I gave it a few spins and each time, it got me more worked up.

This record is truly badass.

It's just barely over two minutes long, but it's got a real filthy riff and a real funky groove. It almost sounds as if the band sat down, hit record and just let her rip for one take. And while it doesn't quite come close to the genius of Berry's legendary songs of the 50's, it is still my favorite Chuck Berry record.

So, if you feel like playing, can you think of a song by a legendary artist or band, one with many releases under their belt, that slipped under the radar, but you consider one of the greatest? I guess there are no rules here other than, it should be a single and not some deep album cut.

In the meantime, give a listen to "Club Nitty Gritty."

Tough assignment - had to think about this for awhile.

Smokey & The Miracles - Come Spy With Me.

It kinda fits within your guidelines but yet doesn't. It was the b-side of The Love I Saw In You Was Just a Mirage, which charted for them in 1967.

Come Spy is one of my favorites of The Miracles... and there are many.

Randy,
The judges will allow "Come Spy With Me." While it wasn't pushed as an a-side, it became a regional hit (though never charted nationally) thanks to the movie of the same name. And it's a great song!

Speaking of some of my favorite bands:

The Knack -- Pay the Devil (Ooo, Baby, Ooo). (Hey, I consider them "legendary"!)
Great song from their third album, but a ballad so it tanked as a single.

The Monkees -- Porpoise Song ("Theme From Head"). Sure, Monkees fans know it, but the public has no idea about this great Goffin/King track...) One of their best.

KISS -- "Sure Know Something" / "Dirty Livin'" and "Tomorrow" / "Naked City" singles had great a/b sides that went nowhere because they sounded nothing like the expectations of KISS music.

For a regional hit -- Mitch Ryder's cover of "When You Were Mine" should have been a giant comeback single as it was all over Detroit radio when it came out, but nationally...nothing.

Glen Campbell -- "Ghost On The Canvas" -- apparently released as a non-US single that never charted anywhere. Damn shame, too.


(Most of the above charted at the bottom of the Hot 100, though, so maybe they aren't all lost classics...)

Blondie "Sweet & Low". I'm assuming it was a failed single.

Bonnie Raitt's Keep This Heart in Mind was released as a single. I thought it would zoom up the charts, but to my knowledge, it never really made a dent. I could never figure that out. joe

In the USA, The Kinks "Waterloo Sunset" should have been a tidal wave but hardly caused a ripple.

Great call on the Ryder and Campbell tunes. Both ace.

speaking of Mitch Ryder I'm not sure if they released a single off of the Detroit record but i bet they did and whatever it was it should have been a hit. and Bye Bye Baby Mary Wells (not sure if that would count either, sorry)

This should qualify Soul Sister Brown Sugar Sam and Dave

Soundsource,
"Bye Bye Baby" was a Top 10 R&B hit and a Top 40 Billboard Hot 100. But I'll allow it because it's one of the greatest records ever made and it's my blog.

Wasn't "Bye Bye Baby" Mary Wells' DEBUT single?? (I mean, it's a great record that's largely forgotten, but definitely from very early in her career, before she was famous.) Little Steven loves it too, so it gets played on "Underground Garage".

‘River Deep - Mountain High’ from Ike & Tina (w/ Phil Specter production) might be too obvious - or ineligible. The single peaked just barely inside the Top 100 in the U.S.
I understand that it did a little better in the U.K, Lol!
Also considered ‘Maybe I’m Amazed’ from the first McCartney solo album, but apparently that wasn’t released as a single at the time. Though I believe the live version was Top 10 single years later.

"Rainbow Ride" by Andy Kim.
It made 49 on the Billboard singles charts, but should have been No. 1. ... Just a perfect pop record. Great guitar. Great sound. Great song.

Club Nitty Gritty, great tune. I'm a huge fan of Mr. C. Berry and I was not aware of this song. Wish it was at least twice as long. Thanks, FP

It was decades before I tripped over (not the living) Elvis's version of "Patch It Up". It was a real find for me.

Danny Hutton's "Funny How Love Can Be". It bubbled under the hot 100...actually sorta just simmered, but it's the Three Dog Night sound before they existed.

I just love these unexplored Motown cuts. The idea of guys and gals in the studio laying down live tracks just blows me away. Live drums and bass on these Motown songs is just insane. Driving down the freeway after a good round of golf with Motown undiscovered songs is a good day.

That Mercury "Greatest Hits" LP is truly an awful record.