At Home With Southern Culture On The Skids 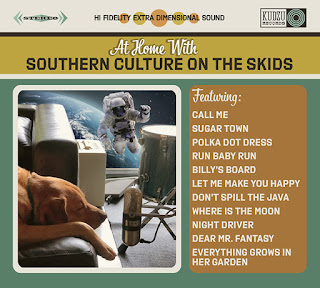 Out today, the new one from Southern Culture On The Skids. And let me just say, this is a good ol' good one! I went twice around the park with this baby yesterday and I'm ready to dive in again today. It is their best since "Liquored Up & Lacquered Down."

The opener "Call Me" finds Rick Miller wasting away, filling out forms while the sun shines and he runs out of beer. Nothing but bad news, so just call him! He's around, just hunkerin' down. It's 12 months along since he played some songs, so call him! I cannot get this one out of my head.

And then comes the one and only Mary Huff with the first cover of the day, a perfect SCOTS take on Nancy Sinatra's "Sugar Town."

"Polka Dot Dress" is so damn funky, Ike Turner woke up just to say, "Shit, that's funky." Thankfully, that's all he did.

Look, you need this record. Yeah, I'm excited. But isn't that what music is supposed to do? Thank heavens for Southern Culture On The Skids. Just in time!

Oh, they cover "Dear Mr. Fantasy." And a banjo is involved. And it's genius.

Can't wait to hear this!

One of my favorite bands! It's always fun to see them live too. I'll be buying it!

Call Me is The COVID Anthem!

Can't wait to see them live

Love this band. I came late to SCoTS when I picked up Mojo Box used in 2005. Been lucky enough to see them 4 times since then. Bought one copy for me and one my brother's birthday next month.

Thanks for the tip Sal. Just downloaded from iTunes.

I only saw the SCOTS once. It was a bill with Graham Parker and The Smithereens at Irving Plaza about 15 years ago. Somehow, Sandra Bernhardt was added to the line up and instead of doing comedy, she was singing with a band. It was as bad as you could imagine so I booed loudly until the guy behind me asked me to stop. He introduced himself as Pat from The Smithereens and he agreed that it was a mistake to add Sandra. He was so nice and to this day I'm slightly embarrassed by my Homer Simpson behavior.

Anyway, SCOTS, Graham and The Smithereens all were great that night! Cheers!

I own everything they ever released. Including hard to find vinyl. I just recently purchased At Home With...
I just saw they are playing at Daryl's House (Of Hall and Oates fame) in September and I had just purchased 2 tickets for my wife and myself.

I can't wait to see them live again. I had two signed KFC buckets from the band from previous shows at Higher Ground in Vermont. Met them a couple of times and gave Rick a bootleg of the previous HG show after the 2nd one. Very cool dude, as they all are.