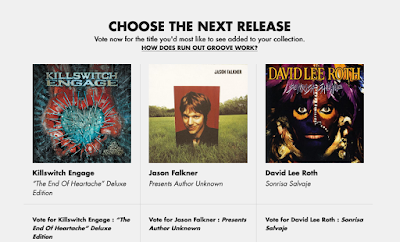 For those unfamiliar with Run Out Groove (ROG), it is a vinyl only, fan driven boutique label that releases HQ vinyl editions, many with key bonus tracks, of albums that have either been out of print, or never before released on wax.

Some of the titles that have won the fan vote are Golden Smog's "Down  By The Old Mainstream," Gary Louris' "Vagabonds," "Dusty In Memphis," and Beau Brummels' "Bradley's Barn," all in stunning 2 LP sets.

Some losers have been the power pop classic from Owsley and the glamtastic "The Best Little Secrets Are Kept" by Louis XIV, still unavailable because not enough people voted!

You can see what is up for release in the photo. And if the Jason Falkner LP loses out to either Killswitch Engage or David Lee Roth, I will not be held responsible for the damage my tantrum will create.

"Jason Falkner Presents Author Unknown" is another classic of its kind. So...even if you couldn't care less about vinyl, maybe you can take a minute and vote for Jason anyway.

A vote for Jason is a vote for me.

Done. And I guess my follow up question is who out there is demanding a deluxe vinyl reissue of a DLR album that he even he probably forgot about?

Done. And I agree with Kevin.

Voted. How do they select the candidates in the first place?

Just looked a little closer, and the DLR album is the Spanish language version of the album. Some people are going to vote for him and not even realize this.

Wow! I didn't notice that detail on the DLR. That would really be an upset.

Thanks for spreading the word, Sal!

I helped with your "vote harvesting" don't tell Mitch the fcn backward turtle :)

Done and I love the Vote Aqui link 😂