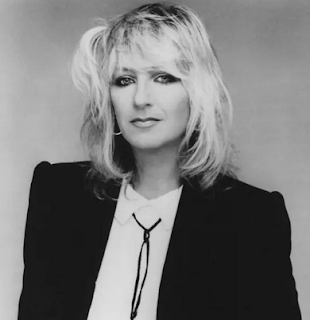 Did not see this coming.

A shame. She always seemed to be the most grounded person in FM. Regretfully, I never saw FM and/or Christine live. And that's a shame as well.

Shocking news, and terribly sad. I really liked her songs and she had a lovely voice. The last FM album, Say You Will, was definitely missing something without her.

Yes. Huge Fleetwood Mac fan here, so it's sad to see her go. I saw her and Lindsay in Atlanta on that tour they did for their 2-person album in 2017. (A show notable partly for having not one but five debuts of songs - I think it was the first show of that tour - plus they played a Fleetwood Mac song from Mirage that apparently had also never been played before.)

I like a lot of her songs, especially Warm Ways, Everywhere, and Never Forget.

Rest in peace. She lived quite a life, especially the early/middle part.

One could argue, the heart and soul of "the new" Fleetwood Mac.

She wrote and sang some really wonderful songs and displayed a beautiful spirit.
RIP

I always say her as the calm center of Fleetwood Mac, the secret sauce, the magic ingredient that made them special. All of which posited her as an element in the band, with Lindsey the musical genius and Stevie the magnetic performer and biggest solo star. Until the obits, I didn't quite appreciate how she was the DOMINANT songwriter of the band, penning many of their biggest hits and more than Lindsey or Stevie. An obvious fact staring me in the face, but there you go. And I too never saw Fleetwood Mac in concert. A shame.

Never really got into the Buckingham - Nicks version of FM. But, Ms. McVie was def my favorite member of the band. Such a tragic loss.

reminds me that when i first heard her voice on the Bare Trees album, I thought it was a man singing (Bare Trees having very little credits). She WAS the center - even going back to the Kiln House days, every publicity photo has her in the middle of the boys.

When I heard the news, I immediately played Remember Me off of the Penguin LP. One of my favorite songs by Christine McVie - - a lost gem. I will miss her.

Really sad. I think Love Will Show Us The Way (from her great and under appreciated '84 solo record and Love Reigns from the Fleetwood Mac Box Set "The Chain" are on every mixtape I ever made for some girl friend or wife to be or for a friend or family members wedding or anniversary. Anyway this one for some reason really touched home more than usual.

Truly wonderful singer and songwriter. Her voice, her songs have been a steady presence in my life for nearly 50 years. And will continue to be...

RIP She was a fine singer and songwriter.

This one shook me a lot, other than posting some songs/thoughts on socials, I haven't been able to listen to her yet. It really hurts to my core. How I loved that voice, those harmonies (how she fit with Lindsay and Stevie, so magical, her piano, and of course those songs she wrote. And she was such an anchoring, steady presence always. Love you- Christine Perfect McVie, thank you.

Christine McVie was blessed with an instantly recognizable voice, and a knack for writing hook-filled, lovely songs.
Her music career spanned decades, and began far before the FM everyone knows. She fit into whatever band setting she found herself in. The blues, rock, pop, she was adept at them all.
Many FM fans are familiar with the Buckingham-Nicks lineup, but don't know much about CM's prior FM output. She was instrumental in the band's turn from a blues band to a rock style. Her contributions shouldn't be underestimated.
When Buckingham and Nicks joined, CM seemed to take a more minor role in the band, at least where the followers of the band were concerned. Her songs were still strong, and she was still important to the workings of the band. My opinion is, her quiet, understated personality was the cause for this. In comparison to Buckingham and Nicks' more outward personalities, she was, as I said, quiet and understated.
CM was my personal favorite among the three singer-songwriters in the latter day FM. (Of course, she shone in the FM lineups before the band went huge.)
Her songs were so important to the success of FM. Always melodic, always put forward with a quiet passion. They provided a welcome change of pace to the other two's songs.
Christine McVie was pure musical class.
RIP CM.

Had no idea she was 79. That's old. That makes me old too. I'm sad. I always loved her background vocals, especially on Sentimental Lady and Hypnotized. Her vocals made it for me.

I go all the way back to her time with Chicken Shack and it's been a wonderful musical ride from there to the heady days of latter years Fleetwood Mac with some sparkling solo stuff in between. Perfect in every way.