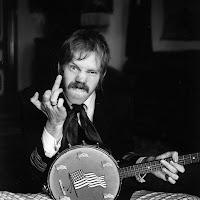 What Dan Hicks and Neil Young have in common are two of the most brilliant and hilarious introductions to one of their songs. It's to the point where I don't even listen to the music anymore. Just once in awhile, I'll dial these two tunes up and enjoy the first 30 seconds of each. 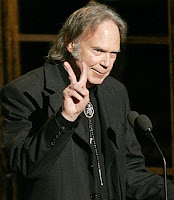 As Nick Lowe once said, and as Steve Simels over at Power Pop reminded me after the Radiohead biltzkrieg and again yesterday at his place, there's an astonishing lack of humor and realism in contemporary pop music. Although, a Google Alert led me to this other piece comic brilliance, found on Street Couch dot com's review of the new Radiohead album:


They are no highs and no lows on The King of Limbs, and even worse, we've heard this all before. The only place we can imagine this album working is in a sushi bar, lightly pumped over the speakers while men in long-sleeved shirts and women in short, slinky dresses sip sake and suck the salt off edamame.


DON'T LET IT BRING YOU DOWN


If you have any other suggestions for brilliant openings, let me know. I feel a mix coming on.
Posted by Sal Nunziato at 5:31 AM

The "Royal Albert Hall" concert by Dylan after Leopard-Skin Pill-Box Hat where he starts mumbling until the crowd quiets down and says something like "if only you wouldn't clap so hard" before launching into One Too Many Mornings.

Robyn Hitchcock has many rambling introductions to his songs that are pretty amusing as well.

Ok, Sal, how can you agree that this album could only work in sushi bars when you texted me " I'm afraid I may be into this record " on first listen ? And that "Separator is my fave...for now "?
If it's hard to picture it being enjoyed, you shouldn't have enjoyed your first listen. (sorry, I had to ask . Figured you'd rather it as a comment than a text)

Jeez. I called it "a piece of comic brilliance." Ok, maybe an overstatement, but I was referring to the statement.

Yes, I admit to sending those texts, but it still doesn't change my mind about the band, or the review I posted on Huffington.

The record on first listen worked better. I guess I wanted to like it.

I should devote my entire blog to pissing on radiohead since that seems to be the only time people get fired up enough to participate.

The original cheeky one...

To be fair I should mention that you also texted " they're losing me fast " moments later.

Plus Thom Yorke at the Bridge school introducing his cover of After The Gold Rush by saying "This is Neil Young's piano, and it's making me do this ..."

I liked Richard Thompson's "This is a medley of all the numbers you just asked for..." from Small Town Romance( and almost all of RT's banter )

I liked Springsteen's old used car lot in the Garden Of Eden/Pink Cadillac intro from the 80s, as well as his "this is a quiet show, so feel free to band together as a community and tell your neighbors to shut the fuck up"

Ryan Adams old drinkin and druggin days led to a whole bunch of amazing rambling song intros. I'll send you some if you want. I liked when he opened for himself and introduced himself as Rachel Yamagata, then complained about Ryan Adams talking too much between songs. Also, when at a benefit he offered to play any song anybody wanted for ten dollars put into the hat, as long as they didn't get there money back if he played it and it wasn't so good.

check out the intro to the live "bodhissatva"--a steely dan b-side, if you can find it.