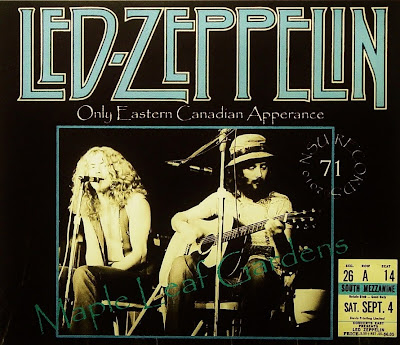 Short story:
This is the single greatest four minutes of Led Zeppelin's career...maybe.

Not So Long Story:

The "big, bloated" band Led Zeppelin has many naysayers. I am not one of them.  You've heard the cries.

"They are a bunch of thieves."

I like all of their albums. And while I've written about how horrible they were when I saw them live in 1977, I have over 100 shows dating as far back as 1968, right up to their very last show in 1980. They do NOT suck live.  (I am still on the fence about the thieving.)


This live version finds all four members playing for their lives. The studio version of "Celebration Day" found on "Led Zeppelin III" is an upbeat little rocker, with slide guitar, some funky stops and starts, and the usual solid performance from the rhythm section. This live version takes on a whole new life. It borders on hard core funk, pre-dating what the Red Hot Chili Peppers have been cited as creating by 15 years.

John Paul Jones and John Bonham kick in at 0:31 and propel this baby into another galaxy.  Check them out behind Jimmy's first short solo at 1:43, then again starting at 2:22.

Jimmy Page takes his usual liberties, hitting and missing like no other rock and roll guitarist. Page takes chances, and occasionally his flubs end up being a highlight, like right around the 3:40 mark. Maybe he had that little stop planned all along, but I've never heard it in any other live performance of this song, and it really raves up an already volcanic performance.


(Forgive me if I've featured this track before.)

There was a point where Bonham's playing went from fluidly heavy to just plain heavy...this clip evidences the former I think....not that late period Bonzo wasn't amazing, but somewhat of a caricature of itself...what does all this mean?...frankly nothing...if I'm gonna comment, I have to say something, si?....and I'm thinkin' '77 wasn't as disappointing as we've allowed it to become in our memory....and if I could go back there for a night...gladly....special band....all good.....and everybody steals one way or another in this industry...

It seems rather an impoverish end to his solo as he then vamped a short rhythm to re-establish his position in the song for his outro guitar part.

III was the first Led Zep album I bought on vinyl *and* eight track (which was one of the few eight-track tapes I bought that didn't break up any of the songs to switch "programs"), and I played it incessantly.
And it's only after hearing this live version that "Celebration Day" joins "Immigrant Song" and (the under-rated) "Out on the Tiles" in my top tier of LZ tunes.
A great rendition of a great track--thanks for posting it!