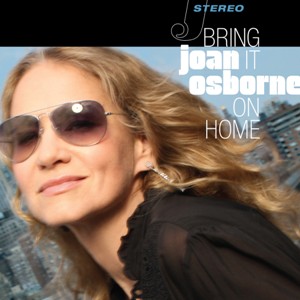 I witnessed Joan Osborne in bars, not just singing, but creating sweat-filled houses of worship years before her first record was released. She's graced stages in the East Village, Tribeca, and even a thankless slot as the opener on Queen guitarist Brian May's first solo tour at NYC's Beacon Theatre and at each performance, Miss Osborne, as the expression goes, threw down.  So when her major label debut hit, I had mixed feelings. "Relish" was all over MTV and I dug it. But live, Joan Osborne had balls as big as Dan Blocker's. The record did not. Well, except for this:

Not a bad place. As a matter of fact, it's the best place. It's the place that Osborne seems to go every time...except on her records. This is a good time to point out, Joan Osborne hasn't made a bad record. That's because she sings on all of them. But, Joan Osborne has never made a great record, and that's because of everyone else.

Her follow-up to "Relish" was tossed back at her, and what eventually became "Righteous Love" was marred by label screw-ups. So what else is new? Her return was a record of R&B covers which should have been amazing, but wasn't. I blame producer John Leventhal. Usually reliable, Leventhal just didn't get it, as the record sounded more like something James Taylor would put out and just didn't feel dirty enough for Joan's voice.

Four years later, Osborne returns with a country record. At this point I'm thinking, "Why is the best Joan Osborne record a Holmes Brothers record?" In 2001, Osborne produced "Speaking In Tongues" for the brothers, a band that played in the same East Village clubs as she did. She got it. She understood. SHE should have been producing her own records.

Check out their version of The O'Jays "Love Train." It is a thing of beauty.

Another record of covers and a not bad record of originals followed in 2006 and 2008 respectively. Both seemed to be the best work of Joan's career to this point, though, as I said, there has always been a great disparity to what's been put on record versus what she really can do...until now.

"Bring It On Home," Osborne's just released collection of blues covers is Joan, circa 1992. This record feels like what I witnessed at the aformentioned sweaty, beer-soaked downtown clubs. This is the record that translates the guts and the soul that everyone knows Miss Osborne possesses, but somehow always gets left outside of the recording studio.

See for yourself over HERE.

It's not just about the songs. It's about the feel of the record, and I give credit to the producers, Jack Petruzzelli and...Joan Osborne.

Check this one out. Please.
Posted by Sal Nunziato at 5:18 AM

Im actually a big fan of "Little Wild One," which in many ways is "Son of Relish." I forget when it came out.

In any case, "Hallelujah in the City" is one of the best things she ever did.

I will, of course, check out this new one on your recommendation.

I love "Hallelujah In The City."

I had the distinct pleasure of seeing Joan front for The Dead or The Other Ones or whatever they were called at the time. On more than one occasion she provided the musical high point of the evening. Singing Sugaree in a way that, frankly, it had never been sung before brought tears to my eyes. She channeled Ron “Pigpen” Mckernan in ways that were improbably divine! The gal won over the crowd hook, line and sinker night after night! She had a t-shirt fashioned after her (“The Joan Zone”) and chants of “Let Joan Sing” echoed the “Let Phil Sing” chorus from the late 1980 shows. One night, in the pouring rain, at Garden State Arts Center she guested and made Turn on Your Lovelight he very own – not a cover or homage but just her song, her way, cool as it gets!. Right at the edge of the stage, bantering with the band – all the while holding the crowd in the palm of her hand . . . magnificent!

Well, count me as one of the people who thought that Miss Joan was a Lilith Fair type. "Right Hand Man" sure changed that. I don't know what "The Joan Zone" Charlie C. was referring to, but I'll guess it was well displayed in that video.

Whoever was the bass player sure was rocking' the Hoener (copy?)

you've sold me. looking forward to hearing complete songs! a crass commercial question - My inclination is to buy locally, but does it help Burning Wood if a purchase is through a Burning Wood amazon link?

Oh happy day--finally we get a REAL Joan Osborne recording! I agree with your comments about her CDs rarely revealing the true Joan Osborne, or at least the gritty and graceful stunner I seem to want to remember from her club gigs in the early '90s. About the only place I know where you can catch a glimpse of that now is at SugarMegs (tela.sugarmegs.org). Pop her name in the search box and revel in some of the gems like 11-19-92 and 12-31-92 from The Wetlands in NYC. If you don't work up a hearty sweat listening to those, make an appointment with your doctor as soon as possible!

Thanks for the heads up. Sounds great so far. Like many others I still haven't heard her make that record that her voice deserves. This may be the one.

Sal - thanks for the heads-up about the new disc. I remember being wowed by a worn out 2nd generation cassette of "Soul Show", and then catching her on the rise at The Iron Horse. The guy who owned the tape said "she sang more when she wasn't singing than other 'vocalists' do all night!" Great line. What I also remember was how orgasmic her performance was - sexually and otherwise - yeah, she really threw down. Great memories.

I've loved PARTS, sometimes big parts, of her subsequent albums, but I agree with you, the producers squandered their opportunities.

We just saw her solo/piano show recently at the Infinity, and she still has that amazing voice and charm. I am really looking forward to hearing what her and Jack (he's back!) have come up with....

I don't know who the bass player is on "Right Hand Man", but it sure looks like Charlie Quintana of The Plugz on the drums.

Ironically, it was in your record store that I first heard Righteous Love, one of you staff playing a pre-release promo copy. I asked what it was -- knew it was Joan Osborne's voice but didn't know it was a new album -- and he was kind enough to tell me then offer to sell it to me at a reasonable price.

The first track "Running Out of Time" was the one that caught me -- that album has a few very good songs. Her cover of Dylan's "Make You Feel My Love" is the go-to version of that song. Of course, she had the "too many producers" vibe on the whole album, but there were enough solid tracks that it should have done much better than it did.

I've always heard rumors that she was "difficult" to work with, so maybe that has something to do with the strange/muted reception of her studio work. Puts me in the same mind when I think of Graham Parker, who hit it out of the park in his early career, but then got into all sorts of shit with major labels and never quite reached the same career highs again. It's the difference between a cult artist and a star. If that person can live with it, I'm OK so long as they can keep recording. But it must weigh on their minds that people they know with half (or less) of what they got talent-wise are making small fortunes and being held in higher regard by many fans.

I don't feel like looking up the info right now, but I'm pretty sure the band in the video is not the same as the ones on the actual track. Doesn't matter tho' - I still love the song.

Thanks for the tip Sal. Will check it out.

Last year, she did some gigs with Jackie Greene and from what I saw on YouTube, they were great.

i downloaded this yesterday from amazon for $8 bucks. a great investment! love her version of champagne and wine.

this is why i stop by this site.

Only saw this comment today, so sorry for the delay.

NO. I get nothing, so please shop locally. Thanks for asking.

Sal - not sure if you heard it, but Joan played World Cafe at XPN last Friday. They have the archived audio up: