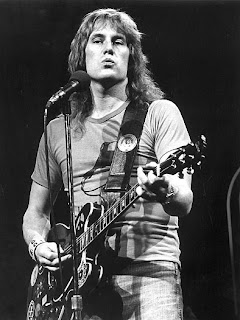 I've been listening to music with all I've got for over 40 years. Occasionally, I'm surprised by how much has slipped through the cracks. Sure, who can listen to everything? But that's not what I mean. I mean, whole genres and entire catalogues simply unexplored.

Anyone who bought a Rolling Stones record must have noticed the photos of Caravan's LPs on the London inner sleeve. Only just heard their music last month. And how about Savoy Brown? All this time I thought I hated this band. I have no reason. Never heard a note. I just ignored it all based on what I knew or thought I knew. "Boogie band, turned into Foghat."  Well, that's not completely accurate. When Savoy Brown finally found themselves, four brilliant records appeared. And when singer Chris Youlden disappeared, Savoy Brown became the band I thought they were all along. God bless Chris Youlden. More interesting is this. Foghat is basically a punchline, right? Listen to the debut produced by Dave Edmunds. Fucking great! The transition from Savoy Brown being great to not so great? The first Foghat album.

We lost Alvin Lee. 68 years young. Complications during routine surgery. What a fucking way to go.

I had a number of people contact me regarding his passing, nudging me I guess, to whip up some obituary/tribute.

You know what? All I know of Alvin Lee and Ten Years After is Woodstock. And I didn't love it. From what I've gathered, this is another band that slipped through the cracks.

I'm going to have to get back to you on this. Or maybe I won't. It doesn't matter.

This is a sad story and a great loss, no matter what I think now or what I will feel later.
Posted by Sal Nunziato at 3:35 PM

His recent album "In Tennessee" has been playing all afternoon. I love it. He loved rock and roll to the end. I have several of his recent albums. They all rock. He was great. this one hurts.

hi sal, i went to a Poco concert at the fillmore east in the early 70s when they opened for savoy brown. whoever thought to pair those two bands together was either a madman or a genius, i'm still not sure; the audience was certainly a mixed bag...anyway, other than the fact that savoy brown nearly blew my eardrums out (hands down, the loudest live set i've ever heard), they rocked: a real blues-based set of all out rock and roll...if you decide to check out 'ten years after' let us know what you think...rick

I think most of us know him from that ten minute clip, which I learned only today was the encore of his set. I had a TYA record many years ago. Studio, which got played a great deal. Savoy Brown was the real deal. But I think Lee's 15 minutes, of which we still owe him 5, is inspiring a legion of guitar players. I was one.

Sal, I also think Chris Youlden was brilliant. Bought his first LP and after he left "Nowhere Road", and was crushed. A big departure to what I expected. I still liked Savoy Brown till Lonesome Dave left and the subsequent Lp with Dave Walker "Street Corner Talking". Dave's singing on the second side of Blue Matter and Looking In are terrific. The hidden gem for me was Street Corner Talking. More of a soul record. I defy anyone to hear a better cover of "Can't Get Next To You".
I first bought a Ten Years After LP hearing "Love Like Man" on a AM radio back in the day. I was 12. Later suprised to learn Slade's "Hear Me Calling" was a Ten Years After tune.

I always thought "Goin' Home" was the lamest pastiche of blues cliches ever assembled.

I have TYA "A Space In Time" on my hard drive and just listened to about 30 seconds of each song, and it appears to be worth listening to.

I listened to about six Caravan albums twice, two years ago. I think I liked "In The Land Of Grey and Pink"(1971) best.

Ten Years After was my first concert; they were touring the Watt album. It was of its time - seemed like they took an hour and a half to play five songs, but nobody minded. LOTS of soloes. If you play a few of the full concert videos on youtube, you realize they didn't change up their repertoire much from tour to tour - straight blues and boogie, which has made me appreciate the spacey riff-based stuff on the studio albums more.

The hidden point is the danger of pigeonholing bands and then convincing yourself that you know them, or you 'got' them - freeing yourself to move on. Take any artist near and dear to you who you have given some time and some ears to - have they morphed, 180-ed and continued to surprise and amaze? Same might be true of those we haven't experienced . . . Like Sal said "who can listen to everything"?

When I had the shop, one of the things that would really give me heartache, was when a customer would browse for an hour and say before leaving empty-handed, "There's nothing new and good to buy." If I had the shop today, I bet I could have sold a dozen Savoy Brown CDs. If you've never heard it, it's new to you.

When I bought my first legit stereo back in roughly 1971/2, the very 1st thing I wanted to hear was TYA's Cricklewood Green coming out of those speakers. When Sugar the Road, Working on the Road and 50,000 Miles Beneath My Brain came rumbling out of those speakers, I was hooked forever. That was what rock and roll sounded like. My life was saved by rock and roll indeed.

I've tried to like Ten Years After but I can't... I played Sssh last night when I heard about Alvin Lee but it's nondescript, unfocussed, boring... never mind...

I was unfamiliar with the Savoy Brown version of "Can't Get Next to You," so I looked it up on the YouTube.

This is the same arrangement that Al Green did, which I first heard when the Stones covered it somewhere.

So - whose arrangement is it? Anybody know?

Which Savoy Brown would you recommend as a good starting point?

Side One of Raw Sienna knocked me out. Side Two ain't too shabby either.

RIP Mr Lee...Cricklewood Green is still the killer for me.
The fade-in opener always grabs me. Solid record to this day. Go ahead, put it on and tell me I'm crazy. And as to Savoy Brown...Raw Sienna is one of my favorite records, period. Chris Youlden's voice is magic and the
band's arrangements are killer. Kim does play one sexy, bluesy damn guitar too! And if "Stay While The Night Is Young" doesn't get you laid, you are with a dead person.

More on Alvin later. A time ago, when WNEW-FM was really loose, TYA and Savoy Brown were played a lot. Like most, 'Cricklewood Green' is the highlight LP (50,000 Miles Beneath My Brain). 'Ssssh' was my intro. What hasn't been mentioned is the band's fondness for Swing like 'At the Woodchopper's Ball' and 'Summertime/Shantung Cabbage' on 'Undead' and 'Me and My Baby' on 'Cricklewood.' You haven't lived until you here the extended drum solo on 'Summertime.' I don't think that's what Gershwin had in mind.

As for Savoy Brown, Kim Simmonds is still on the road, but as Sal has pointed out, that run starting at 'Getting to the Point' and culminating with 'Raw Sienna' is a monster. I still can remember, from 'Raw Sienna':

"To some I'm a wise men/To some I'm a fool
I need a little something to keep my cool
I sleep with sun and/I rise with the moon
I feel alright with my needle and spoon."

I have sung that phrase forever...thanks, Chris.

I'd say that "I'd Love to Change the World" is one of the best singles of its era.

hey sal,
i dj a deep cuts classic rock show on WREK - Atlanta (ga tech radio)called Stonehenge (fridays from 8-midnight) --- check out last friday's show (shows are archived for 2 weeks - www.wrek.org)
and we played 2 hours of TYA in honor of Alvin Lee. The show did not start til around 9 due to a baseball game - so you can fast forward and listen to most of the songs listed in the comments for your post. If you want to check out our set list - go to Stonehengeatlanta.blogspot.com.
chris