"Off The Beaten Trax" : THE WEEKEND MIX 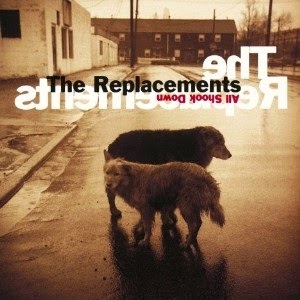 I would bet that "Nobody" by The Replacements would not appear on a 'Mats fans' list of Top 20 'Mats tunes. It's on mine though, and after hearing it pop up on shuffle a few days ago, I was moved to create a mix around it.

From "All Shook Down," the band's swansong, and really more a Paul Westerberg solo record, "Nobody" is a gem. I love The Replacements, but not because of the drunken 2 hour live shows with half-baked cover versions, broken guitars and forgotten lyrics. Yeah, those shows were special in their own way, but I am really not a fan of the "it was so bad it was good" school of rock. It works with movies but not with music. I love The Replacements because underneath that "Fuck the big time" persona, Paul Westerberg wrote three dozen songs that rank with some of the best of the last forty years and "Nobody" is one of them.

Seven of the twelve tracks here are deeper cuts than the usual fare we hear by some very popular artists, including the Ryan Adams produced Fleetwood Mac cover by Willie Nelson and an admittedly schmaltzy production behind a stellar Carl Wilson vocal on the late 70's track, "Full Sail."

The mix is filled out with a few tunes that also popped up on the pod while stuck on a train in Newark, including a fave by Lucinda and the incredibly greasy cover of "Susie Q" by the Stones, which opens the set.

On a side note, not one reader mentioned a word about the Junior Parker cover of "Taxman" posted on Monday. I think it's better than the silence.

Have a great weekend mix.

zip
Posted by Sal Nunziato at 5:13 AM

I love All Shook Down. There is a song on that album called Sadly Beautiful that always stops me when I hear.

Really bummed that I missed their Forest Hill show.

Dang, this looks like a bumper crop of a mix - can't wait to hear "Right Back Where We Started From" by Chandler Travis Philharmonic.

Also, the Song Of The Day today is reeeallly cool - I think "All Apologies" is the best song Kurt Cobain ever wrote, and Herbie Hancock really does something different with it here.

My fave track on All Shook Down has to be My Little Problem with the great Terry Reid on backing vox. Y'know, Page outta get Terry in on a Zep reunion gig since Robert's MIA - how ironic would that be since Terry was Jimmy's initial pick to sing in the band. Randy

Nobody was always my favorite on All Shook Down and easily in my Mats top 10. Having attended a wedding with the same scenario a couple months before the record came out, I'll always relate. 25 years later, she's divorced and maybe still in love with Nobody.

Diggin' the mix -- thanks Sal!

And -- obviously I'm missing some of the subtle interplay with your correspondents but -- I love that cover of Taxman!

"Nobody" has problems. The music is excellent: great melody, production, arrangement. The lyrics aren't there for me. In other words, what kind of horse's ass shows up at an ex's wedding and signs the guestbook "Nobody" then puts forth in song that the bride is still in love with nobody.

There's a strange sort of bitterness and self delusion to the lyric that doesn't seem like prime Westerberg to me. If I want really good self delusion, I'd go with "It's a Wonderful Lie" -- that's the track I'd pick for new Replacement/Westerberg fans. Or Let the Bad Times Roll. Or Goodnight Sweet Prince. You know there's a lot!

I miss Westerberg hitting his stride on a few songs per album. Seemed like the last few albums degenerated into poorly produced basement demos. Here's hoping the recent reunion inspires him to find his way out of that funk.

So - something good came out of your riding the rails in the Garden State! Glad to hear it, look forward to the mix . . .

Found this site the other day:

I'm sure the quality of recordings (and shows) varies a lot but when it's good it's very good. Listening to September's show in St. Paul right now. Really makes me wish I'd tried harder to get to Forest Hills.

I really like All Shook Down and Don't Tell a Soul. And even most of Westerberg's solo output although I know I'm in the minority on the latter. Any love out there for Grandpaboy? I'm less familiar with much of that material.

Re: Taxman
I thought it waould be better to say nothing.

William, maybe "Nobody" is a really terrific song about a horse's ass.

"Nobody" is not only in my top 20, but it might even be top 5. I can't say for sure, since I don't feel like writing out a list right now.

Anyway, yeah, great song from an underrated album. I probably have listened to this one more than any other Mats album because, unlike all the others which I bought on vinyl, All Shook Down wasn't on vinyl in the US. (A friend found a German import, and he's never played it.)

How did you become hep to my boy Chandler? Good God, I've known those guys for more than 20 years now! - bill buckner

I totally agree. I love the Replacements with all my heart. But I've never called them the 'Mats. I don't care about "The Shit Hits the Fans". I was too young to see them the first time around but I don't care about missing the drunken, sloppy shows. I care about "Alex Chilton" and "Bastards of Young" and "Little Mascara" and "Merry Go Round" and on and on. Some of the best songs in history.

My claim to fame...I met Paul Westerberg after a gig in Glasgow during his first solo tour. He signed a poster for me and shook my hand. Very friendly guy. I told him that I was also coming to see him in London the following week. A week later in London...Paul arrived on stage... he gave me a shout out from the stage before he sang his first song!

Wow that sax on the Junior Parker track is sensational


Thanks for a great mix

Nobody is a great track. I've also always been partial to Inherit The Earth from Don't Tell A Soul for some reason...

I may have neglected to leave a comment, but I purchased some Junior Parker immediately after listening to Taxman. Does that count?

Great tune Sal... thanks for sharing!!!

Bent Out of Shape is a gem also...also the drunken references to the mid-late 80'(including bob stinson wearing a diaper at a Fillmore west gig in 86')--the key was to go to two consecutive shows..they rarely screwed up a doubleheader at the same venue... they didn't make the cut for HOF this year.....off topic but startled that Roxy music is not in..ANYBODY ELSE CARE?

Not only is my weekend getting off to a late start, but I don't think I've ever heard anything by the Replacements (gasps of shock/horror all round)so my interest is piqued to hear Nobody after the build-up it's getting. Plan to kick start my inchoate weekend with your tasty little mix. Many thanks & have a good one!