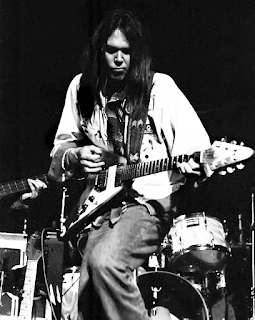 I had been gearing up to finally give the new Neil Young a spin when I received a serendipitous e-mail from a friend:

"How is the new Neil Young? I trust you guys to give me the straight dope."

Before I could reply (or listen), another friend who had been copied on the e-mail, replied:


"I would file it right next to Living With War and Fork In The Road as the Neil Young uselessly singing "Let's... all do the thing I'm di-rectly stating because I say so (band plays riff again)" trilogy.
I'm as liberal as Neil if not more, but he sounds like he thinks Ohio worked because he sang "hey, let's all stop shooting college students today (guitar goes kachung-kachung, scree screeeeee)" instead of "tin soldiers and Nixon's comin'..."
Genius.
I put "The Monsanto Years" right back on the shelf next to the still unplayed "Storytone" and listened to "On The Beach" instead.

I'm sure I've expressed my feelings about Neil before, so I will let my friend who sent the e-mail explain his, since we are on the same page:

"I love Neil Young. He has made a ton of shit that I cannot fucking stand. ("Greendale") He has also made some of my most favorite fucking music of all time. (The "Rust Never Sleeps" album.)

I have a challenge for all who are up for it. It's a little something that goes like this:

You are being considered for a dream position (when there was one) at Warner Brothers. The job is just about yours, but you have one last hurdle. You need to compile a 2 LP set- "The Best Of Neil Young: 1980-2014." It must be chronological and properly follow the time contraints of an album side (approximately 20 minutes per side) and must not include anything live or previously unreleased.

I look forward to the results.

This does not mean "Living With War", and "Fork In The Road" are great albums (or "Greendale" and I might toss "A Letter Home" into that...), by any means, though.

Well, my dream position at Warners would entail telling them not to release any sort of unsatisfying, last century two-disc set and to light a fire under Neil's ass to get him to release the second set of Archives, like his fans have been begging him to do for years. But if I had to:

Well, that's one album! But off the top of my head, too. I'd have to go back and listen to each, throw bones to albums like This Notes for You, Sleeps with Angels and Living with the War that did nothing for me. I like Greendale and Psychedelic Pill but would have to spend more time with them to pull down a track or two.

I'd also ask Warners who would buy something like this. His hard-core fans want another archive. They recognize that his output over the past few decades, while there are good songs here and there, is nothing like from the 60's and 70's. They already have this stuff. New fans? Young fortysomething whippersnappers?

I think I just talked myself out of a job!

What a fun topic! Until I wiki'd Neil's discography and saw just how many albums he's issued since 1980. I can't...I just can't. I'm not up to the job...I withdraw my resume.

But...whoever gets the job? I'll be pissed if you don't include:
Hangin' on a Limb - from Freedom
Unknown Legend - From Harvest Moon

Both tracks, of course feature Linda Ronstadt on backing vocals. Man, do they always sound great together, or what? Makes you wonder why Neil and Linda never decided to do a full album together. Or, for that matter, why Linda never stole a page from Ella Fitzgerald's career and recorded a "Linda Does Neil" album. But that's off-topic....

Hilarious (love the "filed next to the still-unplayed...") - and unfortunately, a little undeniable. I also like the reference to didacticness. I too am a lefty (though a moderate one), and it is a bit unartful the way he composes his thoughts these days.

That being said, I *DO* like parts of Greendale a lot (partly b/c it tells a story, instead of telling us what to do) and I think "Living With War" is very strong. And I definitely like parts of "Chrome Dreams Part 2" or whatever it's called.

But it darn near ends there, in terms of recent Neil appreciation. "Prairie Wind" is as exciting as a wet noodle, and less filling. I like to pretend "Fork In The Road" doesn't exist (frees up space in my brain). And did you know there is a f&*ckin' "stripped, deluxe" version of "Living With War" on the marketplace?? Sheesh!

But I CAN probably do this assignment, and will try. In a similar vein: I for one do not understand the rancor about Neil's 80s output. Much like the underrated Geffen-satisfying-contract compilation "Lucky 13," there was plenty to love then.

So, there is enough to love in that 34-year-span to easily do what you've suggested in more recenty dicey-Neil times.

As long as I don't have to pretend "Fork In The Road," "Le Noise" or "Storytime/tone/teem" exists.

Well Shriner, I never said "nothing from 1980 hasn't been good." I was simply asking for a "best of" from that period. Seems to be more bad than good. I love "Ragged Glory" and "Harvest Moon," and "Freedom" has its moments. But Neil has too many apologists. I know people who defend "Reactor," for Pete's sake. I just wanted to see a selection of tunes that would stand up with his best.

I think a case can be made for a 2-CD set, with a deluxe edition 3rd disc.

CD2
Days That Used to Be
One of These Days
Dreamin' Man
Driveby
Be the Rain
Ordinary People
Angry World
Walk Like a Giant
I Wonder If I Care as Much
Who's Gonna Stand Up?

Side 4
Walk Like a Giant
Who's Gonna Stand Up?

I'm ineligible for participation because the only ones I know are "Everybody's Rockin'", "Ragged Glory" and "Harvest Moon". "Wonderin'" is a great song. I'm a fan, but you have to be careful with new Neil Young albums. So many are terrible.

I am not a Re-ac-tor apologist -- I flat out love that album. Including T-Bone.

Anonymous's list above is pretty good from memory (without relistening to everything....)

For a double-LP, I would have probably tried to figure out a Horse LP and a solo/acoustic LP if I were that Executive, though...

So many great long songs left off Like an Inca,Eldorado, Change Your Mind, Going Home,No Hidden Path
bring back the 80min cd

Given it was to be a double LP, limited to 20 minutes each side, the hardest thing was the time available for tracks. From 1980 - 2014, this is what I came up with:

That quote is genius...totally agree with the sentiment. That could be a contest too...take a classic Neil song and express it as if he were writing it today. Revolution Blues: "Charles Manson killed some folks…”

“Decade” was three records pulled from the first 10 years, it could have been longer. This one, not so much. Nothing very recent here, a combination of the dip in quality of his records and my disinterest in digging through them for odd gems (if there are any). But I think it would make a good couple of discs.

I had difficulty arranging 4 x 20 minute non-live, non unreleased chronological sides, and had to leave off several personal favourites, but came up with this, as a representative slice of the period;

I'd like to have included material from Old Ways and Ragged Glory. Maybe, if the track from The Monsanto Years is disallowed

Maybe a better question would be "name (fill in a number) consistently excellent Neil Young albums" from the years in question. I can think of several, but I think the issue with NY's "recent" output has been its erratic nature. That said, mid-level Neil pretty much beats most anything out there; mediocre Neil blows the big balloon!

Clarence. Landing on Water is a great record. Sal and I have been over this before I think. It's best up really loud. Will defend it forever.

Really enjoyed the lists. Any one of them would work, and more than a little agreement across them.

Agreed. Great lists. Probably better than I could have come up with...

I think a point has been proved!

Hi,
It was my quote Sal was kind enough to single out ( blushes, kicks the dirt a little, bashfully) and compliment ( thank you, as a long time admirer of your writing, your wit, and this blog )
I'm working a schedule that makes it hard to compile a list as well-chosen as some of these, but I absolutely think there's at least a triple set available of strong material, if not more, from that period.
I'm amazed that nobody chose Music Arcade( Broken Arrow), long one of my favorite overlooked Neil tracks, or Bandit (from the highly problematic, legendarily unpopular Greendale )
There's more, but not enough time.
Thanks for these lists, each of them a great reminder to go digging Among the Canyons of Neil's Crap ( album title for the mix? ) and to find and recheck these gems.

As an aside, though, I must ask, if Neil has forever been absolutely convinced that he must ONLY record during the (thoroughly scientifically debunked) magically powerful full moon in order to capture that elusive Neil Young magic, why is his batting average WAY worse than nearly every other artist of his stature? Why is it that Bruce Springsteen and Ryan Adams, for instance, can record any time of the day or month and still never unearth something as dreadful as "Let's Roll" let alone albums like the new one, filled with Let's Rolls.

Again, thanks Sal, for this blog, which is a valuable public service in my world. 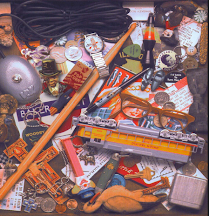 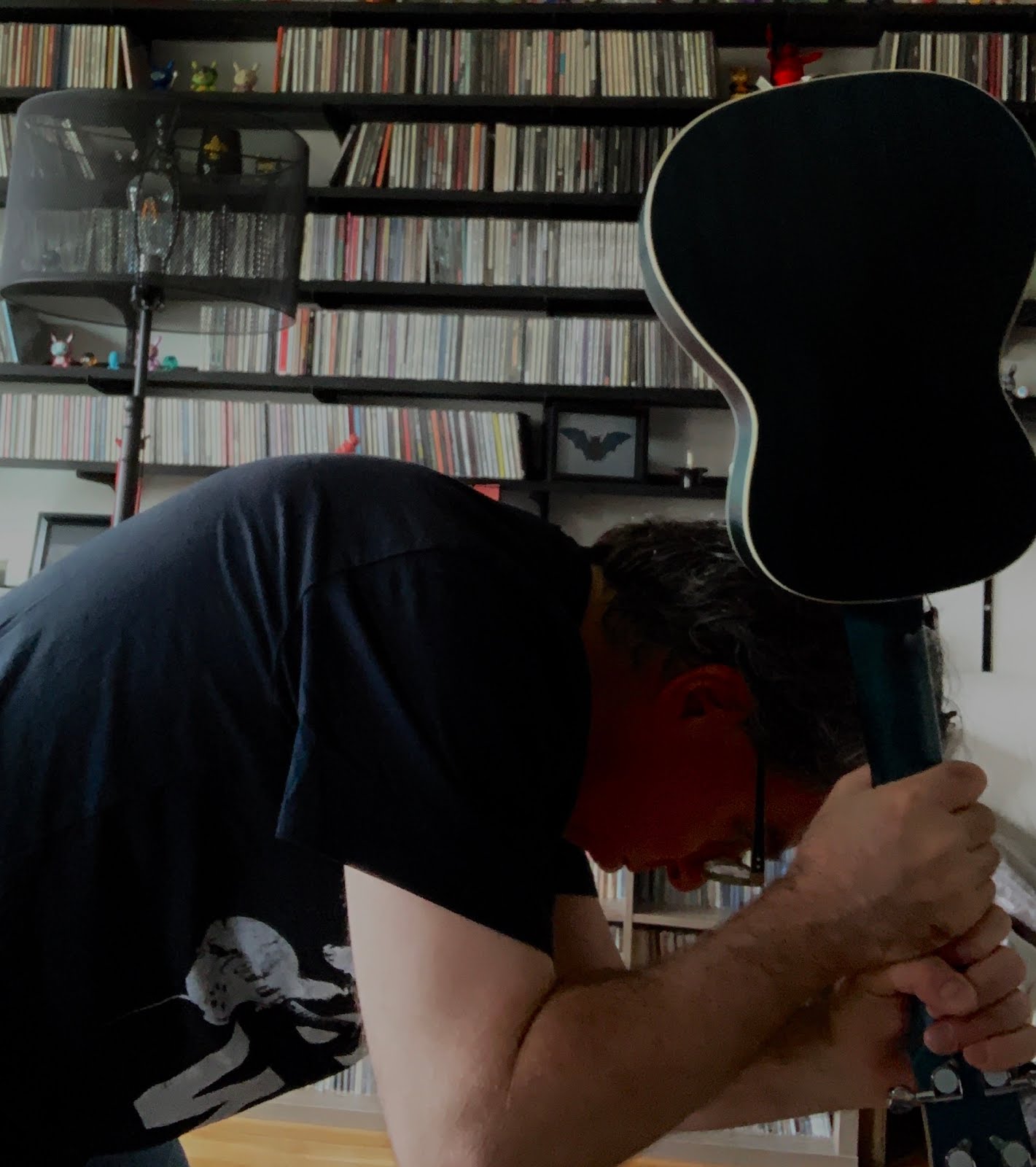