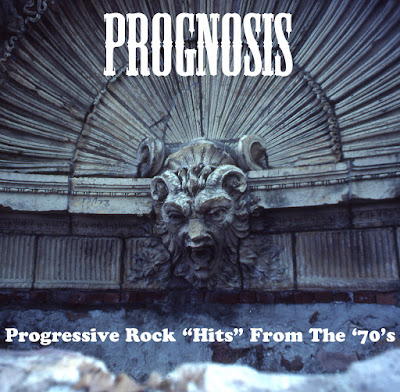 I was busy with another project (building a guitar) and didn't have any ideas until last night when I went through the library and started pulling tunes. Even then, it doesn't always work, and I admit I've spent days tinkering with the sequence. Not this time.

I grew up with Yes, Genesis, King Crimson, ELP, and the rest.
None of them are featured here.
This is music I'm less familiar with than usual.
Most of it is from years of trolling blog sites for things I'd only read about in the past.

For example, Mogul Thrash is the band John Wetton left to join Family, before leaving them for King Crimson. I never expected to find it, but thanks to the internet, I have FLAC files. 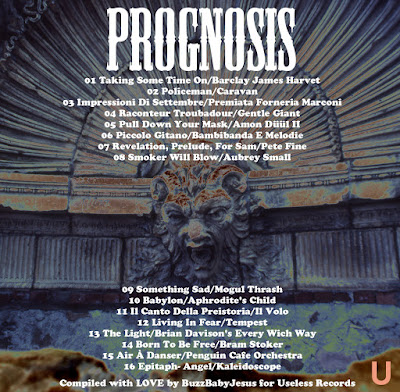 I tended towards shorter songs when possible. My favorite Genesis song, for instance, "Supper's Ready" is a whole album side and clocks in over 20 minutes. Add "Close To The Edge", and "Lark's Tongues In Aspic Pt 1", and there's an entirely epic cd length mix.

The Italians really "got" Prog and some of the best bands were from there. "Impressioni Di Settembre", an old favorite, was somewhat blandly re-recorded by PFM in english as "The World Became The World", the title track to their second american release, but I've always preferred the original Italian version.

Also here is Il Volo, another of the best, represented by "Il Canto Della Preistoria (Molecule)", which also transcends it's lack of english with some truly extraordinary guitar sounds.

Amon Düül II is from Germany, and technically krautrock.

Aphrodite's Child is from Greece, and features Vangelis, long before "Chariots Of Fire".

Brian Davison was the drummer in the Nice. This 1970 solo album is nothing like his former band.

Tempest was a power trio freaturing Ollie Halsall, sadly best known for playing "Paul" on The Rutles recordings. He briefly joined this band, wrote all the songs, and sang lead on the album they recorded and left, to play with Kevin Ayers.

Bram Stoker is a band who left behind an album with nary a trace of other info. This is one of those that collectors go nuts for. Same goes for Pete Fine's.

I only downloaded Aubrey Small a few days ago, and barely know "Smoker Will Blow". This description caught my eye:
"The recording experience at Trident became intoxicating and at times even became somewhat surreal. For one number “Smoker Will Blow”(producer)John Anthony had the idea of putting orchestration on the track as it was too simple. Within a matter of days arranger Richard Hewson appeared together with a huge assembly of the finest jazz and orchestral musicians available. Here was another highly respected musician who had a list of high profile credits to his name including the Beatles, Bee Gees, Diana Ross, Art Garfunkel, Fleetwood Mac, Supertramp, Chris Rea among others – another who’s who! The band watched from the control room with amazement as an extraordinary and complex soundscape unfolded on their song".

Kaleidoscope was an English band whose roots were in '60's psychedelia, and released some really exceptional music, but for some reason ended up with less than nothing. This song is the closer to an album they finished in 1971, but didn't see release until 1992.

Posted by buzzbabyjesus at 7:22 AM

I have a soft spot for this period, too - teenager in the late 60's/early 70's - and the FM station in Oxford, OH, specialized in it. PFM opened for Dave Mason at Miami U. You left out my faves, tho - Flash (lots of short songs on the 3rd album), Keith Relf's Renaissance and Strawbs' "Hero and Heroine."

Flash was considered, but they've always sounded like 2nd rate Yes to me, Peter Banks notwithstanding.

I want to know more about "building a guitar." What are you doing? A few years back I "built a bicycle." I took a bike a friend was throwing away (an early 1990's Specialized Rockhopper that was destroyed), had the frame sandblasted, powdercoated it, bought a frame spreader and upgraded it to current gearing, and replaced every component on it. So I'm INTERESTED in "building a guitar."

I had an '80's Japanese Fender Strat with a bad neck so I bought a replacement. I repainted the guitar while I finished the new neck, using photoshop to create a decal for the headstock. I got a fancy new pickguard and routed it out to change one of the pickups to something else. This required routing the body as well. 20 coats of lacquer over flourescent pink. Wet-sanded every few coats with 600 grit. Some soldering involved.

Just back from holiday in Ibiza & a Spanish cod-reggae version of Zep's "Whole Lotta Love" over the tour bus's pa was plenty progressive enough, but this is a fine little collection to savour. Many thanks!