There is a narrow alley way that sits behind the row of houses that stretch from corner to corner on East 19th Street between Avenues Y and Z in Sheepshead Bay, Brooklyn. For what seemed like every summer day from approximately 1970 to 1980, and not so frequently for a few years after that, it served as a private playground for me and my cousin and our friends. Most of the time, the hanging out took place on the stoops of the houses out front. But, when my cousin and I wanted to have a good, uninterrupted toss of the baseball, or a few games of either Horse or 21 on the basketball hoop attached to the top of the Braddisch's garage, the alley way was perfect. The traffic was one car every four hours as opposed to four cars every change of the street light on the corner. 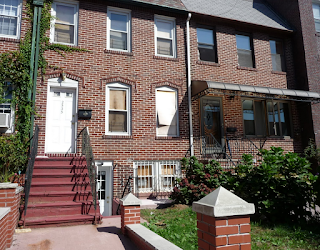 21 was a losing battle. It wasn't that I couldn't shoot, or that my cousin excelled at basketball. I was simply born a loser. To spice things up, we'd each put up a record from our collection. "Who's Next" versus "Yes-Fragile." The winner would get the record, a very big deal when you're 12 years old. It didn't matter if I was winning 19-3. I would lose 21-19. Always. Just always losing. Losing records at 12 years old was like getting fired from a job at 40. I would get fired from three jobs every summer day, and yet, I couldn't wait to play 21 the very next day. I never gave up. It was too much fun to just give up.

Another way to pass our time was Balls & Strikes. We'd each choose a pitcher--Stan Bahnsen versus Luis Tiant--and act as both catcher and umpire for nine full innings, all the time, trying our best to emulate our chosen pitcher's wind-up. We'd even go to the bullpen if we thought our particular pitcher hadn't brought his stuff, and by inning 6, one of us would be winding up like Sparky Lyle and the other would be calling more strikes, naturally. There was something incredibly zen about this whole exercise. Each walk was a run, and those balls and strikes were being called by the same person who was trying to beat you when it was his turn to pitch. The most amazing thing about Balls & Strikes?  It was the calmest and most relaxed my cousin and I have ever been with each other, and we always managed to play fair. I don't recall ever arguing over the calls at the plate. I don't think the two of us could have a 10 minute conversation now that we are in our 50's, without losing patience, or you know, "arguing the call at the plate."

I've been waking up every day for about two years now, expecting the worst. I wasn't always like this, though some would argue, I was only ever like this. But I'd fight that. Times were good, for a nice stretch, too. I don't feel that way now. But I also don't think we play fair anymore. It isn't Stan Bahnsen versus Luis Tiant anymore. It feels like a universal need for understanding versus a universal lack of understanding, with absolutely no game plan. Just two entitled sides who want what they want, with zero sacrifice. It's been said when two parties come to an agreement, it's because both felt they walked away with something. It sucks walking away with nothing.


We all miss the good old days and I believe to my soul, the times we had will come again. We just have to want it. Taking off work, finding an alley and playing balls and strikes isn't a realistic plan. But we don't have to be so adamant about not playing at all.

Children can be cruel. My cousin and I were occasionally cruel to each other, but somehow, we always finished the day okay, looking forward to the next. If only adults could play like children. Just figure the fucker out, whatever that daily fucker is, and go home okay. Walk away with something.

Just play ball for the fun of it - you won't lose so many records.

Mel Stottlemyre was my guy.

I played approximately 40,000 Wiffle Ball games growing up. We had a small back yard with a chain link fence a decent distance away, in right field. In left we propped up an old pingpong table - it was The Green Monster. Centerfield was a lilac bush, of course. The neighbor kid and I would cut boxscores out of the paper and run down the lineups (he was SF, I was Detroit. Weird allegiances for upstate NY, but whatever. I was all about Willie Horton.)

You had to bat left for the lefties and right for the righties. Pitcher would call outs and hits (singles, doubles, triples - a sharp whack down the 3rd baseline we usually good for 3.) We never argued about it. Didn't matter who won. We were playing ball on a summer day, that was good enough.

(For new players, we didn't always know the first name. I remember he called SF shortstop Chris Speier "Sammy Spear" for the longest time, because Sammy Spear directed the orchestra on the Jackie Gleason Show.)

Thanks for letting me reminisce, but your point is taken. Everything is zero-sum now, it seems - and it's not enough to win, there is the need to dominate. We're growing more tribal by the day. I find myself less optimistic that the wave will break and roll back, but I'm going to do what I can, not least because I have a teenage daughter.

My brother and I played a similar game of Balls & Strikes although I can't remember what we called it. At the time, Jon Matlock of the Mets was my favorite pitcher and I was always trying to copy the high kick during his wind up.

Keep playing and keep up the good fight Sal. The world does seem to be heading in the wrong direction these days but I firmly believe that things will get better. It just may take some time.

Wonderful (and unusually hopeful, even if it's just a shred!)
Yes both sides are embedded and don't want to give an inch
even when the falsehoods are exposed.
Did you see the recent Atlantic cover story about how the 9.9%
(below the .1%) have created a self perpetuating aristocracy?
Colleges, jobs, etc.
How do you convince people to let the right ones in?
DH

I spent most of the summer of 1962 at the age of 12 playing "Home Run Derby" against one of my friends. The small field where we played gave a huge advantage to right handed batters so to be able to complete as I batted lefty. I hit inside out to hit the ball to the left side. It permanently fucked my swing and I've spent the rest of my life as a inside out swinger. Grrrrrrr!

I ruined my swing and I almost never won a game anyway.

Excellent piece! Things are pretty ugly, but I like to think it'll change for the better by the end of the year.

When we weren't playing in the nearby Little League fields, we used to bounce a tennis ball off the front porch. If you hit the edge of the step just right, you could put it over the other guy's head and into the street for a home run. Anything that dropped into the front yard without being caught was a single. I think if it hit the sidewalk it was a double, and hitting the strip of grass between the sidewalk and curb was a triple. We were forced to bounce it off the curb after hitting the edge of the top step at the wrong angle and slamming the ball into the bottom face of the aluminum front screen door too many times. It made quite a loud bang. We were Jim Bunning or Chris Short, Gene Mauch was a bum and always will be.

Nice story, nicely told. A suitable allegory for our troubling times. But, of course, the game to play should be cricket! Cheers?

Great to have another memory play (by play) from you Sal. Dear God, how could you bet an LP on every game of 21? For keeps? If you always lost, wouldn't he have all your albums in the blink of an eye, assuming you couldn't buy more new LPs to replace them every day of the week?

And it might be helpful/positive to not see it as two sides, each refusing to give ground. Not when that implies two equal sides. The VAST majority of the people agree with you on sensible gun control, health care for all, raising the minimum wage etc. FOX News might want to pretend the country is nastily divided. It's not. we just need to back control by voting and agitating and not giving up til this moment of fascism has been defeated.